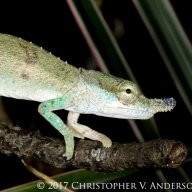 Conservation Notes
This species has been assessed as Least Concern by the IUCN Red List of Threatened Species and is included on Appendix II of CITES and EU Annex B. There is no annual export quota for this species, however they are commonly mislabeled and exported as Calumma boettgeri, which specimens of this species were previously thought to represent until recent revisions of this group (Prötzel et al. 2015). This species occurs largely within the protected area of Montagne d'Ambre National Park, as well as other nearby areas.

Distribution
Madagascar
Calumma linotum is known to occur in northern Madagascar in and around Montagne d'Ambre and Joffreville, as well as from the Andampy area of the Tsaratanana massif (Prötzel et al. 2015). Further, records of Calumma boettgeri from the area surrounding Antsiranana (Diego Suarez) are believed to belong to C. linotum (Prötzel et al. 2015).

Contributed By
Dr. Christopher V. Anderson
Dr. Anderson is a professor of biology at the University of South Dakota and the Chair of the IUCN/SSC Chameleon Specialist Group (CSG). Among other topics, he studies chameleon biology and has published widely about them in journals, books and online magazines.