There are a number of ways to transport your chameleon to reduce stress. Whenever your chameleon needs to go in the car to the vet, or when you're moving, it can be nerve-wracking to make sure they are going to be okay during the stressful journey. Though chameleons have specific long term needs they can tolerate short periods of minimal needs, such as during transportation of short durations. Basking and UVB aren't needed, nor is food or water. The most stress-free travel method I have found is actually to put your chameleon in a dark box to encourage them to just hunker down and take a nap, even if it's the middle of the day. Small cardboard boxes work well. I install a perch several inches off the bottom of the box (just a stick that's been pushed through the sides) and put a towel on the bottom of the box in case they fall or flail. 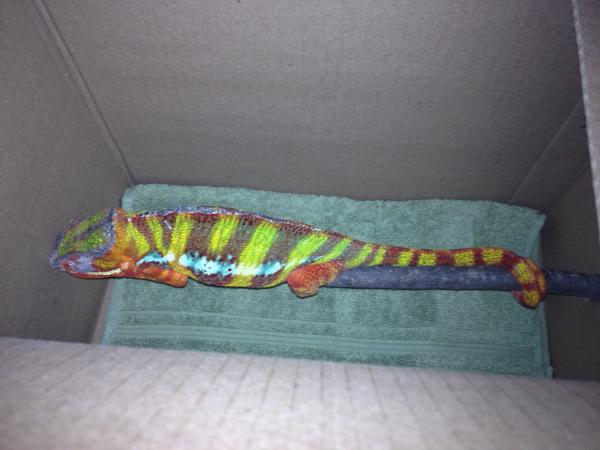 I place my chameleons on the branch and when they have all their feet on it, I close the flaps with one piece of tape over the top to keep them closed. No air holes are needed because cardboard boxes are in no way air-tight, and air holes would just let light in. If there is a lot of light your chameleon will be looking for ways to get out of the strange environment, which I think is much more stressful. If it's dark they won't want to move much because they can't see well. I have opened the boxes and found them gripping the branch very securely and fast asleep. One was sitting on the towel instead of his perch, but was still sound asleep.

Some people will use small clear containers with some branches in them so they can see their chameleons during transport. Some chams will tolerate this and just hunker down since they're in an unfamiliar environment. I tried this with mine and they paced and scratched at the side the entire time, which seemed far more stressful to me. Some people will just put a big plant in the front seat and let their cham sit on that and hide for the journey. I tried that too and this is where Oscar ended up: 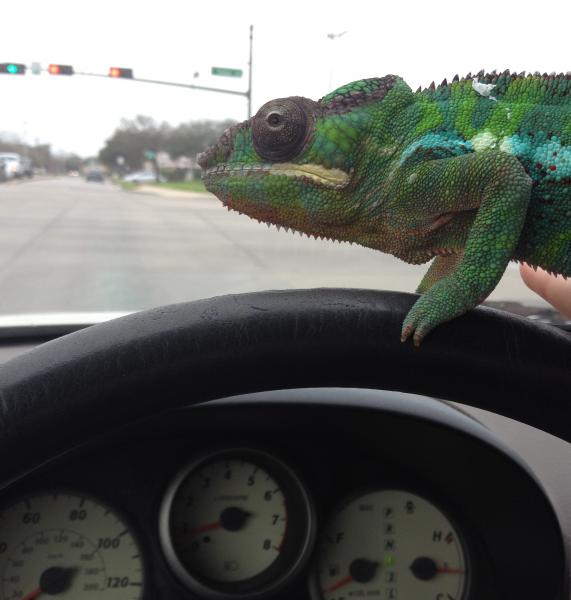 So I wouldn't recommend it...but it can work for some.

My last move was from Texas to Colorado over 2 days (stopped over in New Mexico for the night to break up driving) and my chameleons were in their boxes for 48 hours straight before I got their cages unpacked and them back in them. For a long journey like that make sure they are well hydrated and well fed in the week before. But I only gave them a small meal the day before they were packed up since they wouldn't have basking to aid in digestion. When they came out 2 days later they resumed their normal routines like nothing had happened and went back to basking, eating and drinking like normal!

Remember, chameleons are shipped across the country all the time, and their journeys are often 24-48 hours. They're shipped in small containers or bags in completely enclosed boxes and are probably tossed around quite a bit. The overwhelming majority suffer no worse for wear.

Collapsible mesh laundry hampers with lids make excellent temporary cages and fold up for easy storage. My chameleons lived in these cages for several days before our long move. They were outside in the nice weather but lights could also be added for indoor use. I did not place lights close to the mesh so be careful with heat around them as I'm not sure if they would melt or burn. They come in a variety of sizes and colors and this was the largest size with a lid that I could find. The wire frame actually allows your chameleon to climb on the walls or place sturdy branches in them without collapsing. The lid is essential so your chameleon cannot escape its temporary home. I got mine on Amazon here: http://www.amazon.com/Whitmor-6155-...OGX8/ref=sr_1_1?ie=UTF8&qid=1338745337&sr=8-1 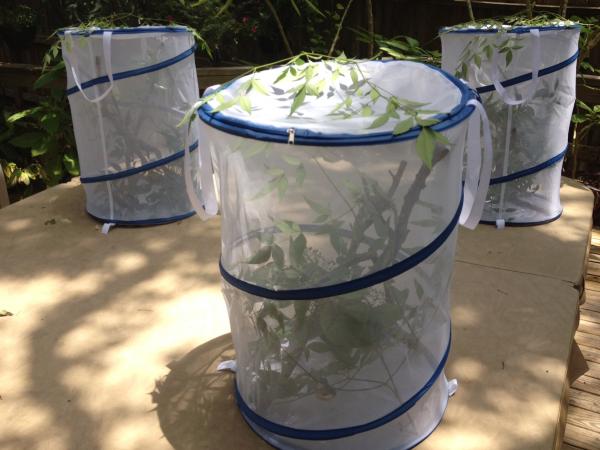 These also work well for outdoor caging on nice days to get some sun or for an emergency evacuation plan. If your house was in danger and you needed to get out quickly do you have a plan for what to do with your chameleon after you can only grab him? I have my collapsible cages (one for each cham) next to their cages so if I have to grab and go I have something to put them in later!
Reactions: Uri, Jpeff, Pepps and 16 others
Share:
Facebook Email Share Link

Im sure many will find this helpful
Excellent blog post Ferret! Every Christmas we go to our cabin which is about a 5 hour drive from home and I usually have my chams boarded but last year I wasn't able to so since I only had my 4 y.o. Veiled at the time, I packed up his cage, along with the kids, dogs, presents and clothing and took him on our annual winter vacation! I held him in a blanket on my lap (he's a cuddle bug and likes to be held) so he wasn't stressed out and tolerated our trip very well! It was nice for me to have him join us for present opening on Christmas morning!!
This is great! Now I don't have to worry. Thank you so much for all the information. I hope a lot of people see this.
such an awesome idea. I often ponder on what we would do in case of an emergency and have to evacuate...thanks
Im going on a hunt for some of those baskets now.
Thanks so much for this well written and useful information! I will soon be taking my veiled for a check up and this blog has shown me some wonderful and practical techniques. Good stuff
this is so much great info!!!
ive been trying to figure out what on earth to have for an emergency evac container and this is brillant!! will be getting some of these asap
I can not find any hampers like that! They either have no top, to thick of mesh, or something wrong!
Here's the link to those hampers: http://www.amazon.com/Whitmor-6155-...OGX8/ref=sr_1_1?ie=UTF8&qid=1338745337&sr=8-1
I have a larger plastic cage for vet visits and made a bag to go around it to keep it darker and keep our little dude quieter, but I also had to deal with the cold because we live in Wisconsin. I did some digging and found these!

You just pop the metal tab inside and as long as they are not next to your animal, they provide a nice warmth. And, you can boil them and use them over and over! Our vets loved the idea. I put them outside his plastic carrier in a pocket I sewed into the bag and it is perfect. Doesn't touch him on his branch but keeps him nice and toasty on these cold trips (if needed) to the vets in the winter.
This was incredibly helpful. Thank you.
view our sponsors