My chameleon came with a tongue issue when I got him over a year ago and he has been struggling to catch pray ever since. He fires his tongue about 3-5 times and fails before he loses interest in eating at all, in most cases. Funnily enough today was the first day in over 9months that he actually caught a pray item at some good distance but failed on one attempt before that, I have had to have him bite the pray off a piece of cut out mesh to assist him with his eating. From what I have heard, tongue damage is irreversible for the most part? I have been trying to get a vet appointment for a very long time now and I may be able to travel there in the coming weeks. He won’t attempt to eat from a bowl unless he is very hungry and even then he struggles to catch it. Despite these issues he is mobile and has no other observable issues with his health and also, with some patience, he is able to eat on the days that he needs to. He may miss a day or two but he is able to eat, I’m just concerned that it isn’t the right way to eat at all and there may be some underlying problem with his health or care.
as a side note he is only able to catch superworms first try if ever, don’t know why. I have it on video but it won’t let me attach it, one of the problems is that the tongue stops just before it hits the pray item. And another issue is the tongue not sticking 75% of the time. Followed by it either missing slightly or being quite slow.
*image of enclosure attached below, am changing plant and branch arrangements soon and it’s an old photo so the heat bulbs are covered now.
Any help will be appreciated.
Tom.
K

What supplements are you using? Please be specific..give brand names...do they have phos, calcium, vitamin D3, vitamin A? What form of VITMAIN A?
What specific UVB light are you using? Long linear, compact? Do you change it when it should be changed?
Photos of the chameleon please...from the side.
T

I use a 6% Arcadia proT5 UVB kit.
I use Arcadia earth pro A all days except Thursday and Sunday, on Thursday I use Arcadia calcium pro Mg and Sunday I will supplement with revitalise D3. My UVB bulbs are replaced every 10 months and from what I can see I don’t think earth pro-A has phosphorus in it but I could be wrong. 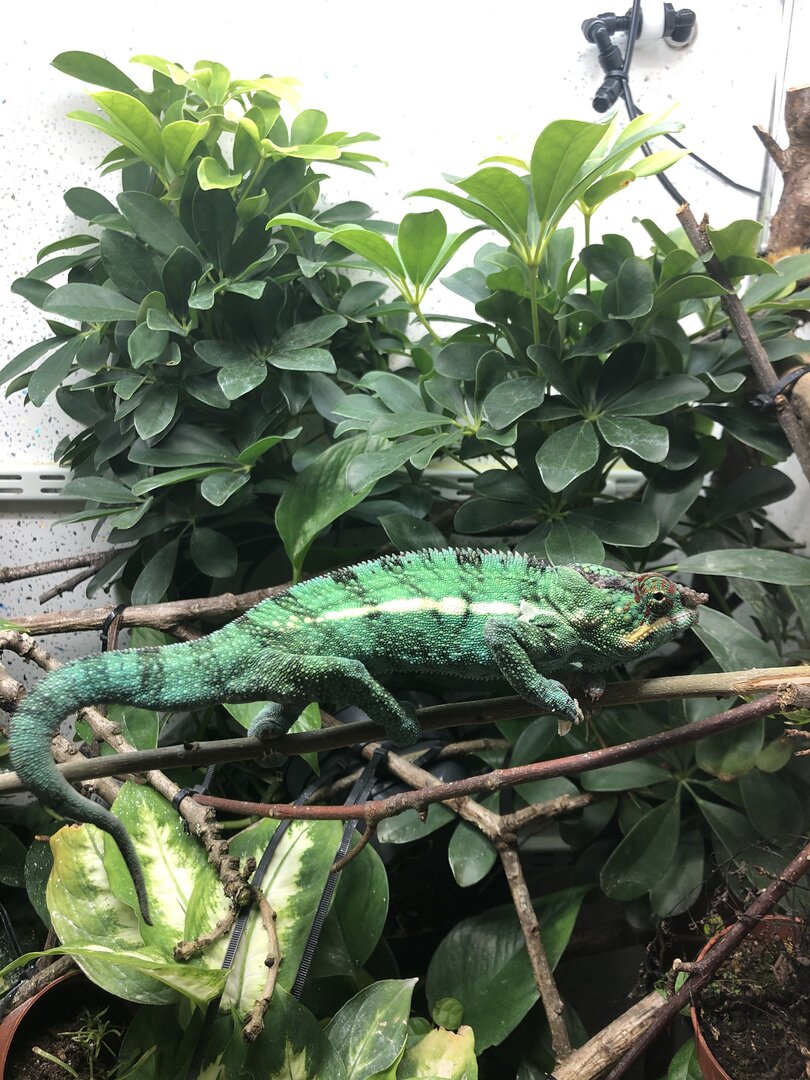 I'm not a vet...
I'm wondering if he could have injured his tongue before you got him.
Sorry I'm not being much help.
You must log in or register to reply here.