Just double checked - it has been almost exaxtly 5 months since I got the colony to when I got babies. I think much of this was dialing in their care and cage, as well as waiting for some to mature.

Also on a food note - they obviously enjoyed the butter lettuce, but I also
threw a full carrot in there and they have gone to town on that as well. It has lasted much longer, but theyve drilled through it like superworms do! I think the conditions help keep the carrot fresh a lot longer... as I feel like that has been in there for almost a month and it still looks moist and fresh.

snitz427 said:
Well we have a lot of new insects going at the same time, so I figured I’d post along the way of things that worked/didn’t. I find other people’s threads like this really helpful when I’m trying to learn, so I hope this helps someone else.

I *cough* found *cough* a small colony of snails. They are supposedly a great feeder for chameleons, with a high moisture and calcium content. @jamest0o0 has shared a lot of knowledge and tips for keeping them, which is much appreciated!

I’ve had the colony for about a month now, and preformed minimal maintenance other than adding cuttlebone, and the occassional lettuce leaf and misting.

It was pretty clear to me that this was insufficient care after lifting the lid and finding a reeking cage, a dead snail, and zero eggs. The cage accumulated a lot of waste, moisture, and decaying food. I spotted small mites on the large snail, as well. It’s possible they were springtails, since my eyesight isn’t great... but since they were on the snail I’m going to say no, they were mites.

So tonight I gutted the cage. I misted the entire cage, which encouraged movement, and moved each snail over to a holding pen. The snails definitely liked their little snail shower and the increased light, as they all became extremely active, including the snails that went dormant.

I poured the old, funky soil into a 5 gallon home depot bucket. I’ll check it occassionally to look for any small snails we may have missed. I will add a handful of BSFL and let them and the springtails clean the soil up for the next full cleaning.

I squirt the container vigoursly with the hose and then soaked it in warm, soapy water. Afterwards I wiped the sides with apple cider vinegar and rinsed well. I added 3-4 blocks of coco earth to the bin, a little plastic planter as a hide, fresh cuttle bone and food.

I then gave each snail another little shower to ensure any remaining soil or mites were rinsed off before throwing them in the new bin.

They need lots of calcium to develop and maintain their shells, so in addition to the cuttlebone I sprinkle their food with calcium powder.

I was throwing in a piece of lettuce or collards and leaving it... eventually the little strips left behind turned black and I am sure contributed to swampy soil. So i added a small plastic dish to slightly raise the food off the soil and will remove/replace it every other day. This will help with mites, as well, should they reappear. I’ll add some BSFL and springtails to this bin, too, to act as a CUC.


I didn’t get any eggs the first month, which I am sure was partly due to 2 of the adults sealing themselves off (which they do when unhappy), and 1 eventually dying. If conditions aren’t great, they go dormant and seal up.

So I think I had a few problems...

1. There was some light entering the cage (evidenced by a few pumpkin seeds sprouting), but probably not enough. I don’t think they need bright light, but similiating dusk/dawn is good. The lighting for the stick bugs should fix this.

2. The cage was too dirty. I will be removing food regularly and giving the sides a good wipe weekly. The snails were super active with a bath so they’ll likely get pulled out for a rinse every week or two, as well.

3. They like mistings, but too many/too much makes the cage muddier. The baths will help, but I’ll just have to be careful to use a finer, shorter mist and keep the lid off a bit for air exchange.

4. More airflow. They are in an airtight container with a small screen and small holes. I think this is fine so long as I take the lid off every now and then to air it out. These guys move surprisingly quickly and make a break for the exit, so I’ll be careful to check the lid and sides for potential escapees.

I’m hoping the new digs and fresher food will help encourage breeding. There are 3 adults currently and several small snails. Not sure how quickly they grow so I’ll check back in a few weeks with these guys.


Kids of all species are annoying.... but they sure are cute!
View attachment 231615

I know this is a couple months old, but i loved this post, so im bumping it lol.

snitz427 said:
So that small lettuce head I added has been completely, 100% eaten in 8 days. No evidence it ever existed. Which is insane considering there are maybe a dozen small to medium snails in there? Average size is of a black bean or pea?

And........ I have babies!!!!! I havent been checking the soil as I thought maybe they werent large enough or happy enough. Now I know we are good and i can start looking for eggs. Woohoo!! I noticed that some of the babies were squeezing between the lid and getting smushed, so ill need to make sure that the lid is fully latched tight and no babies are near the top when in their bin.
Click to expand...

Whoever came up with the term “like herding cats” never tried herding snails. These little guys are a handful! And fast! They make a break for the exit immediately... and as soon as I catch one and put it back in the bin, two more babies are at the top! Whew!!! 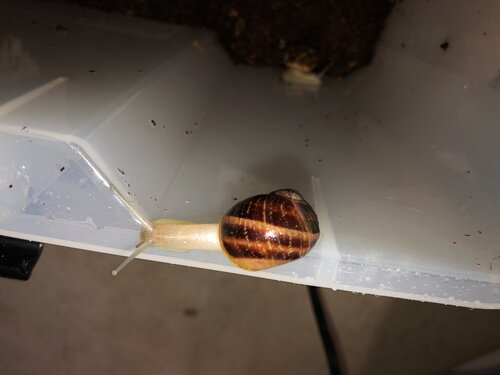 But they sure are cute. 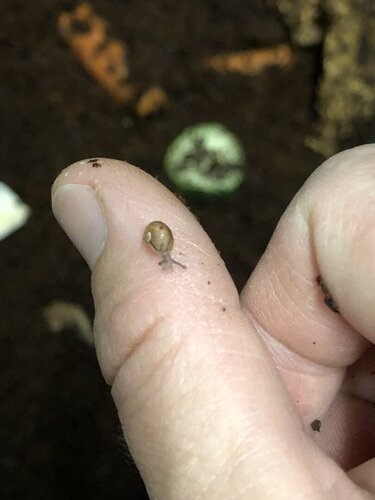 I dug around and didnt find any more eggs... but note to future self - use less soil. I have 4-5” of coco earth bedding and not only does it take forever to dig around and look for eggs, but the container weighs a metric ton, too! 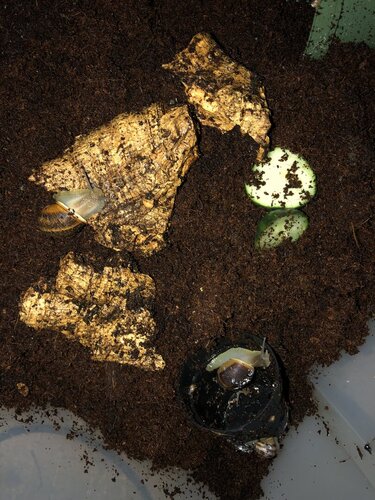 Theyve lodged a complaint with the landlord... apparently the neighbors are very loud. 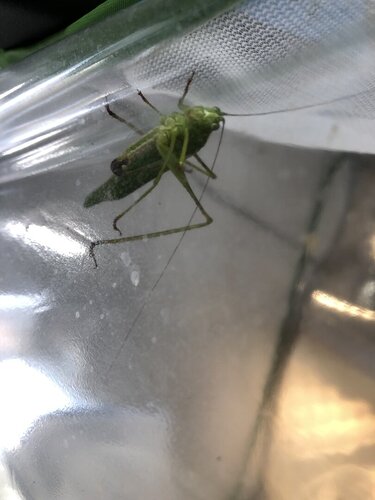 When can I start buying snails from you?!?!

janjan20 said:
When can I start buying snails from you?!?!
Click to expand...

The guvment frowns upon that, but I do have “Jimmies” to go with my “Sprinkles.”

Ok ok...I will text you about “Jimmies and “Sprinkles

I got so excited tonight when I saw eggs on the side on my snail container. I just checked for them less than a week ago!!!

So I scooped them out, only to find they are freshly hatched babies! How the heck did they lay eggs and they hatched within 5 days!? I am confident I checjed and dug around those sides.

Anyway, I dug them up and upon closer inspection I found around 20 tiny baby snails! They are ADORABLE... see vid below. If these guys lay and hatch 20 eggs every week Im going to be in trouble soon.... 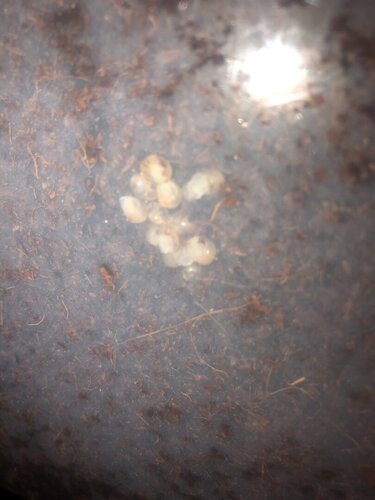 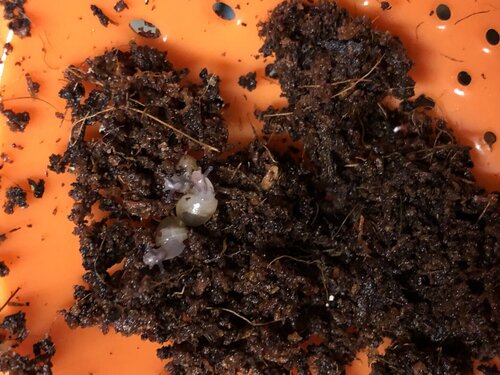 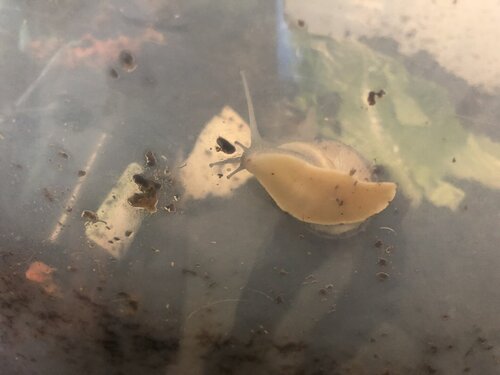 Ugh... what in the tarnation is going on here? Found a snAil out of its shell (and it looks like chameleon poop ). After some quick google research it seems they can do these when looking for a mate... so maybe I’ll have some action shots later tonight! 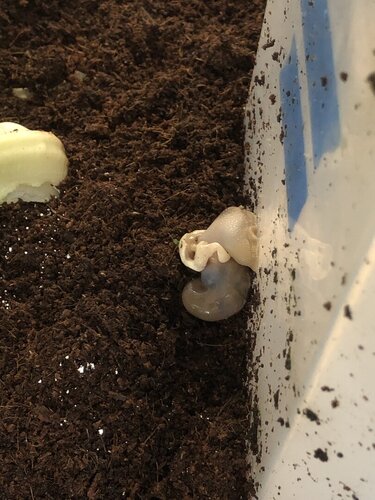 snitz427 said:
Ugh... what in the tarnation is going on here? Found a snAil out of its shell (and it looks like chameleon poop ). After some quick google research it seems they can do these when looking for a mate... so maybe I’ll have some action shots later tonight!

Snail xrated
You must log in or register to reply here.

L
I’m so frustrated with the mist king!

Misting during the day?