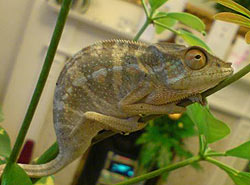 Dehydration is a common health problem among captive chameleons. A general symptom is sunken eyes, but that can also be a sign of other underlying health issues. Additional symptoms of dehydration can include orange urates, weight loss and sunken head pads. Increasing misting times, maintaining proper humidity levels and offering better access to drippers should help improve hydration. Showers can also be used occasionally and with care to simulate rain. Chronic dehydration can lead to serious health problems like kidney failure. A reptile veterinarian should be consulted when these symptoms do not improve.

This is a serious problem that may require veterinary treatment quickly to correct the underlying issue before it's too late. A number of things could cause this behavior, but most likely the chameleon is suffering from illness, dehydration, metabolic disease or some other serious health problem. To learn about the very important aspects of chameleon husbandry see the Chameleon Care Resources.

Lethargy, Sleeping During The Day

This is perhaps one of the most common health problems seen in captive chameleons. A healthy chameleon should never sleep during the day for any period of time. Sleeping itself is not the illness, but rather an indication that there is something wrong to cause them to feel ill and thus want to sleep. Any number of things could cause this symptom, but the most likely culprit is inappropriate husbandry that has resulted in illness or disease. To learn more about the very important aspects of Chameleon Husbandry see the Chameleon Care Resources. If after the necessary corrections have been made to your husbandry and the symptoms still persist a reptile veterinarian should be consulted. 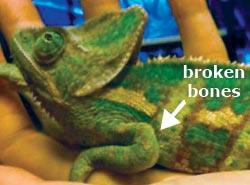 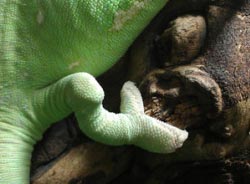 Metabolic Bone Disease is unfortunately common among captive reptiles and the cause is frequently due to a lack of dietary calcium, imbalanced nutrition or improper artifical lighting specific to reptiles. To compensate for inadequate calcium absorption the body will pull calcium stores directly out of the bones so there is enough for critical functions like muscle movement and metabolism. The offshoot of this is that the bones become very weak and brittle. Signs of MBD include stunted growth, bent leg bones, fractures, double elbows or knees, grabbing at its own legs or head, decreased tongue usage, a soft jaw and the mouth not aligning or closing all the way. This is a very painful disease and if left unchecked will eventually kill the chameleon.

Damage from MBD cannot be reversed completely but the process can be stopped. The bones can heal over time with medication and proper husbandry, which includes access to proper UVB lighting combined with correcting any calcium imbalance. It is important to address early signs of MBD with your veterinarian to stop further damage. 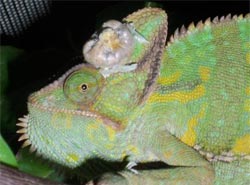 Problems with the skin can be a number of things. Low humidity can cause difficulty shedding which then may cause retained dead skin. Dry crusted areas or discolored patches of skin that are not caused by shedding could be a fungal infection which is a very serious ailment. Discoloration of whole areas of the body such as the tail can indicate a potential neurological problem like a spinal fracture or pinched nerve due to organ or egg displacement. Skin that is oozing or coming off in a long piece along the back or head are most likely thermal burns from a heat lamp. Parasites called filarial worms can be found under the skin. Skin lumps could be abscesses, worms under the skin, papillomas, or less likely cancer. 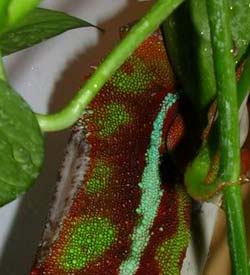 Thermal burns usually occur when a chameleon is too close to their basking light or the enclosure is simply too hot at the basking level. The skin doesn't have to actually touch the bulb to be burned. It is theorized that pain receptors in chameleons are far down in the skin layer so they don’t necessarily know they are getting burned until it is too late. Always verify that your basking area has the appropriate temperature for your chameleon. Thermal burns start off as white patches or blisters, and as they progress their color will turn black. The burned area may slough off. Common locations for burns include the top of the casque, spine and knees. With proper care and a change in husbandry burns can heal if carefully treated. Sometimes a yellow, waxy discharge will come out from under the burned skin. Burns should be treated by a reptile veterinarian immediately upon discovery. Secondary bacterial and fungal infections can occur if left unchecked.