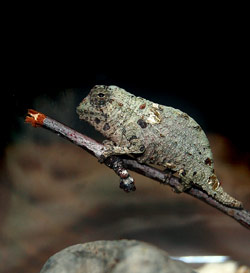 
Difficulty: Intermediate - These species are for more experienced keepers. They have additional husbandry requirements that can be difficult for people unfamiliar with general chameleon care.


Brief Introduction:
Pygmy chameleons, also known as stump-tail chameleons, are a fascinating group of species due to their remarkably small size. In fact, some of the smallest vertebrates known to science are among this group. This caresheet focuses on the three most common pygmy chameleons in captivity today, the bearded, spectral and pitted pygmy chameleons. All three are native to montane forests and tend to occupy lower shrubs and areas where little light breaches the forest canopy. These little chameleons have evolved to resemble the dead leaves, twigs and mosses found in their natural habitats. As of this writing most pygmy chameleons available in the pet trade are wild caught animals, with very few known stable captive populations.


Description:
The three pygmy chameleons covered in this caresheet have an adult length of 3-3.5” (8-9cm), but other species can be as small as 1” (2.5cm). Pygmy chameleons generally display various shades and patterns of brown that often help to blend them into the surrounding leaf litter and forest floor.


R. brevicaudatus are generally light brown with a striped or splotched pattern resembling a wilted leaf. Shades of yellow, red and green can be seen during courtship and display. The bearded pygmy has a small "beard" of scales that protrude from the bottom of the chin in both sexes. They are found in the Eastern Usambara and Uluguru Mountains in Tanzania.


Rh. spectrum have a mottled pattern of browns, greys, and even some red tones. Diagonal stripes can be seen along their flanks. A small, soft nasal process is present resembling a small horn. Their tails are noticeably longer than that of brevicaudatus. The spectrum can be found in areas ranging from Cameroon to the Congo.


Rh. temporalis are light brown or grey in colour with small diagonal stripes on their sides. The lips are broad and flat and somewhat resemble the beak of a duck. Their tails are noticeably longer than that of brevicaudatus. The temporalis are found exclusively in the humid Eastern Usambara Mountains.


Behavior:
Pygmy chameleons are one of the few species that can be successfully housed in groups. They coexist peacefully as long as there is adequate space, vegetation and no more than one male per cage. Like other chameleons, and due to their very small size, they are a pet that is for observation and should not be handled unless necessary. Pygmy chameleons have the unusual ability to vibrate or buzz when frightened in an attempt to intimidate other chameleons, predators or even an insect bothering them. For what they lack in size they make up for in personality; they are calm and don't seem intimidated by their human keepers.


Lifespan:
Pygmy chameleons have short lifespans of only 1-3 years.

R. brevicaudatus can be sexed by their tail length and body shape. The male's tail is longer and slimmer, and their dorsal crest is more serrated. Females typically have a larger and more rounded body than males. Rh. spectrum and Rh. temporalis males have a prominent hemipenal bulge. 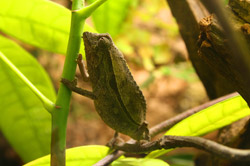 
Humidity:
Humidity is an important aspect of chameleon husbandry. Pygmy chameleons require levels around 60-80%, which can be achieved by several misting sessions a day over all areas of the cage. Live plants help increase and maintain humidity. Sometimes a cool mist humidifier or timer-controlled misting system is needed. See Water & Humidity for more information.


Cage Size:
The appropriate cage size depends on how many pygmies it will contain. A general rule of thumb is 5 gallons for each pygmy chameleon at minimum. Glass cages like aquariums are recommended for pygmy chameleons as they can be easily planted and landscaped to mimic a small part the forest floor. Most pygmy chameleons don’t climb very high so horizontal space is preferred over vertical space.


Although pygmy chameleons can be housed communally care should be taken to ensure that the occupants are not stressed by the presence of others. Males should not be housed together unless the cage is large (over 40 gallons) and heavily planted. Cages should be furnished with many plants and climbing branches to provide opportunities for exercise and plenty of places for hiding, especially from other chameleons.


Lighting:
There is scientific debate over the ability of pygmy chameleons to utilize UVB rays for vitamin D synthesis as little direct sunlight penetrates to the forest floor where they are found. It is still recommended to use a low intensity UVB bulb of 2.0 or a 5.0 that has exceeded its 6 month use. A heat or halogen bulb can be used over the enclosure to provide a small basking area, although it is not necessary for pygmy chameleons. A basking bulb creates the heat gradient so that your cold-blooded chameleon can regulate its body temperature by moving into warmer or cooler zones as needed, but be careful not to exceed 80F (26C) degrees even under the basking zone. There should be 12 hours of UVB light, along with 12 hours of darkness for proper rest. 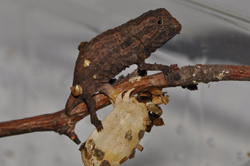 Feeding:
Chameleons are insectivores meaning they should only be fed live insects. Pygmy chameleons will be near the bottom of the cage with their head facing down when they are hunting for food. Great feeder insects for pygmy chameleons include small (1/8"-1/4") crickets, baby silkworms, and baby hornworms. The rule of thumb is to not feed insects that are longer than the width of your chameleon's head.


Neonates up to 3 months: as many fruitflies or pinhead crickets as they can eat several times a day
Juveniles 3-6 months of age: 6-10 small crickets daily
Adults: 4-6 small crickets every other day


Supplementation:
Calcium and other vitamins are very important to your chameleon's health. Feeder insects should be lightly dusted with powdered supplement before being fed to your chameleon. As a montane species (native to higher altitudes) pygmies have decreased supplementation requirements compared to tropical species due to metabolism differences. Use calcium (without D3 or phosphorus) twice a week, a multivitamin once a month, and calcium with D3 once a month.


Hydration & Misting
The cage should be misted at least twice a day, drying out completely between misting sessions. This raises relative humidity as well as stimulates your chameleon to want to drink. Pygmies will drink water droplets on the leaves of the plants in the cage and leaf litter on the ground very discretely. A dripper is not needed. Chameleons do not recognize standing water as a drinking source. See Water & Humidity for more information. 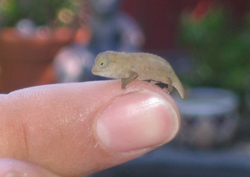 Egg Laying & Breeding
Unlike larger species, pygmies can be kept in the same cage with other pygmies, even a mate, at all times. Courtship behavior is very rarely observed but the male will bob his head at the female. Females do not display different coloration when gravid but appear much larger the closer they get to laying. A laying bin is not needed as the cage should have at least a few inches of substrate (organic soil) at the bottom. Some of the substrate should be more moist than other areas to give them choice in where they'd like to lay eggs. Nest digging and egg laying behavior is very rarely observed as pygmies are very secretive. A female will look much thinner after laying eggs and this may be the only indication that egg laying has occurred. If possible, the eggs should be carefully removed if you can find where they were buried. Eggs are very small and should be incubated between 65-78F (18-25C) and take 45-90 days on average to hatch. The size of the egg will increase as they get closer to hatching. Eggs should be incubated in a sealed container with moist vermiculite and often a dark household cabinet is sufficient for an incubator if temperatures are right.


Hatchling Care
Neonates should be immediately removed from the cage with the mother if they were not artifically incubated as predation has been known to occur. Neonates can be kept in groups with their same age siblings in a 5 gallon or similar sized cage. The bottom should be left bare and the cage should have many clean artifical plants and climbing apparatuses for neonates to hide. Temperature should not exceed 76F (24C) for the hatchlings. A UVB light is optional (completely unique to Pygmy chameleons) but recommended. The cage should be well misted multiple times a day and the hatchlings should be fed as many flightless fruitflies as they can eat several times a day. Fruitflies can be dusted with calcium once weekly. Males and females have different tail lengths even from birth and can usually be differentiated at a very young age. Male and female siblings should be separated by 3-4 months of age.