Update on the MBD redfoot tortoise

Staff member
You may remember my little redfoot tortoise rescue. Mia had very loving owners who were just completely uneducated on the needs of a reptile and for over 2 years Mia lived in a 20 gallon tank filled with about a foot of cedar shavings with only a heat lamp above her. She had a water bowl that she could not even get into most of the time and her diet consisted of those prepackaged tortoise pellets that were at least soaked in water first. They said they took out into the yard sometimes but weren't sure if she was allowed to eat the dandelions she was always interested in so they wouldn't let her (dandelions are so good for them!). Luckily they decided to find her a new home! 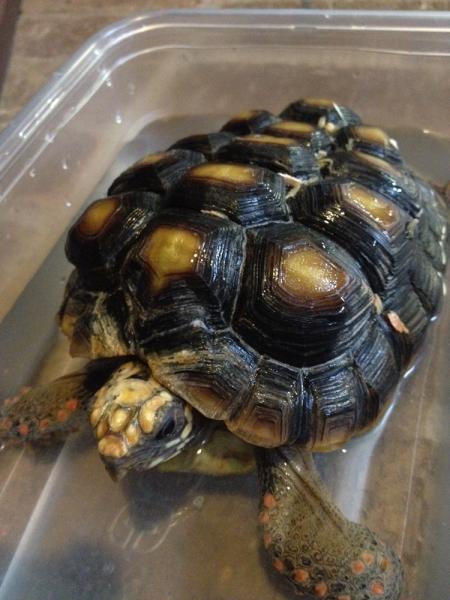 This is a picture of what a redfoot her age should look like.

Mia suffers from a severe case of metabolic bone disease (MBD) due to improper care. She looks to be about 4 years old, but it's hard to say because she may be badly stunted and could be older. She is very sweet and sociable but poor thing didn't even know what lettuce was. She only knew to eat her pellets. I've been mixing in boatloads of calcium powder and chopped up greens into her rehydrated pellets and she has figured it out and now will take greens willingly! She now is a fan of dandelions.

Her shell is severely deformed with significant pyramiding and it is actually concave over her back where it should be domed. Because of this she actually has a little trouble breathing sometimes. You can see the exaggerated effort to move air since there is probably just not enough room for her lungs to expand. She can't really walk - she pretty much just drags herself along because she's not strong enough to pick her shell up off the ground. One of her legs was broken at some point and didn't heal quite right so she walks on one knee a lot. Since she was swimming in a thick layer of cedar shavings most of her life her muscles are really weak. When it's cold and she's indoors (under UVB) she has a towel to walk on to give her traction and build muscle strength. And then she has an entirely outdoor pen so she gets lots of sun, has to climb grasses and weeds and gets good traction on the dirt.

I had to trim her beak as it was overgrown from improper nutrition. Those stupid pellets are just not a good diet and aren't balanced with the nutrition needed. I've only had her a few weeks but she is already stronger and much more active! She can sometimes pick her shell up and doesn't walk on her knee as much. Sometimes she's not a great eater but I can always get her to eat canned pumpkin on bad days and I mix it about 1:1 with calcium! She loves to soak in her new water dish (clay pot saucers work wonderfully) and when it rained the other day she had a grand old time wallowing in the mud! She crawls all over her pen and munches on a calcium block directly almost every day. Now that she moves around so much she is building strength and poor thing actually smacks herself in the head with her front legs every time she takes a step because they're a little more bent than they should be.

The damage to her shell is permanent but I am hopeful that she can still live a long happy life. Maybe with lots of good nutrition and calcium it will dome out a little over time to grow with her. It's too hard to tell at this point. But I'm so happy to see her improving already. Baby steps...

Moral of the story: Do your research when you get a new pet!! There's no excuse in this day and age to let this happen.
Last edited by a moderator: Nov 16, 2015
K

She's in a good place to have the best chance of recovery...and its good that she is already showing improvement! Keep up the good work ferret!

GREAT JOB!!!! so happy you took her in and have made the effort to give her a chance at life,,, really great ferrit, this makes me happy

thats wonderful you took her in, and gr8 job on getting her back on her feet

So glad you took in that little Tort to give it a proper life. Hope you got him in your Will cause he gonna be around awhile hehe .

James45 said:
So glad you took in that little Tort to give it a proper life. Hope you got him in your Will cause he gonna be around awhile hehe .
Click to expand...

Yep, she and several others! My sulcatas are only 10. The gopher torts are around 35 and my oldest box turtle is around 40. But there are quite a few much younger. Hope my kids like em!
You must log in or register to reply here.