So You Think You Want A Parson's? - The 1 Year Update

I believe a couple of days ago was the one year anniversary of this pair of Parson's chameleons being placed in my care so I figured it was time for an update. I'll try to keep the beginning brief for those already familiar with the story. This time last year I started seeing advertisments on Kingsnake.com from an individual near me who had imported a group of Parson's. They came in with CITES documentation as captive bred, were inspected by USF&W, and were released to the importers. Parson's chameleons from Madagascar were suspended from export by CITES in 1995 and the likelihood of any being produced today from bloodlines collected prior to that ban is basically none. I have, for a long time now, had the position that I would rather do my small part in conservation and support the CITES suspension than purchase smuggled animals, no matter how much I've wanted to work with Parson's chameleons again. I would much rather see the community working towards having small export quotas allowed from Madagascar than having them sent from country to country until they can pick up papers USF&W will accept.

Soon after seeing the ads, I heard through the grapevine that the importer did not have the proper facilities and experience to take care of them for very long. After some internal debate I decided that, as the animals were in the US to stay, their best interest would be served by offering to help him assess their health, try to figure out the best temporary housing, and find more experienced owners for them as soon as possible. Over the next week or so San Diego experienced some very high daytime temperatures with low nights and the importer was not able to control enclosure temps, apparently leading to the quick demise of three. He quickly decided that he couldn't bear the thought of losing any more of them and started trying to place them into good homes that night. He offered a pair to me under the agreement that I would always provide the best home I could for them and that they would never be for sale.

Now the fun stuff. I heard fecal results from 5 of the 8 chameleons and all had heavy parasite loads of a number of different types. Two vets made comments about the slides wiggling or the sample almost jumping off the microscope! Both have a large number of missing toenails as is common in wildcaught chameleons that have been pried off of screen mesh by uncaring workers. On arrival both had infections, as a result of ripped out toenails, that had spread up into bone as verified by xrays. As your reptile vet will tell you, usually they just amuputate infected bone in reptiles because it is so difficult to completely treat. Rather than handicapping them, they both went through a series of antibiotic shots and topical gels that seem to have stopped the infection. Later, the female also had an infection and swelling in her lower jaw which had to be treated with another round of antibiotics. A couple of months ago it became aparent that the male had begun using his tail less and less so off to the vet we went. After xrays we found that two of his vertebrae, one above his pelvis and another a few bones further into his tail, were swollen. With no external trauma the doctor said he feared it could be cancer. After anesthetising him again to perform a fine-needle aspirate on his vertebrae a sample was sent to a pathology lab but it came back as infection only, no cancer. Ok, so how do infections end up in bone like that? Back to the vet(s) we went for a specialist's ultrasound, looking for another infection, specifically in the heart, that could be throwing off infectious material that could have gathered in the bone. Nothing was found. He just completed two straight months of injections last weekend and is using and curling his tail much better. We're hoping that he is only left with some oddly reconstructed bone in those two places but time will tell.

I had our custom cage builder for FL Chams make two cages for them, both 5 feet tall and 3 x 4 feet on the ground. When the weather is nice, which it's about to be all the time, they have their big outdoor cage which they really seem to enjoy. Both exemplify the picky eater chameleon and will occasionally refuse to eat until I find something new for them or figure out exactly where they wish it to be placed. They are pains in the butt that I find myself doting over way too much. Although I kept Parson's chameleons in the early 90's, I hadn't yet gained the experience I have now with so many different chameleon species and perhaps took them for granted. Up until the last year I had continued to think of them as just another chameleon, albeit a big one. But, now I realize that there really is something different and special about the species and I've found a new respect and awe for them that is both a lot of fun and a continuing challenge. I guess that's it for now, wish us luck for year 2! 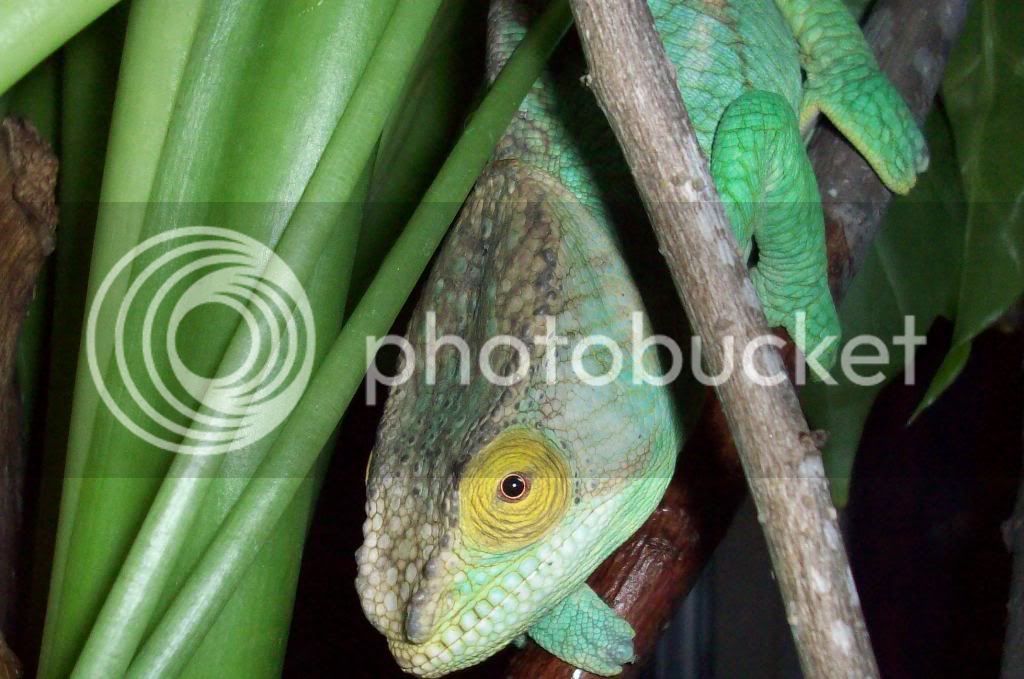 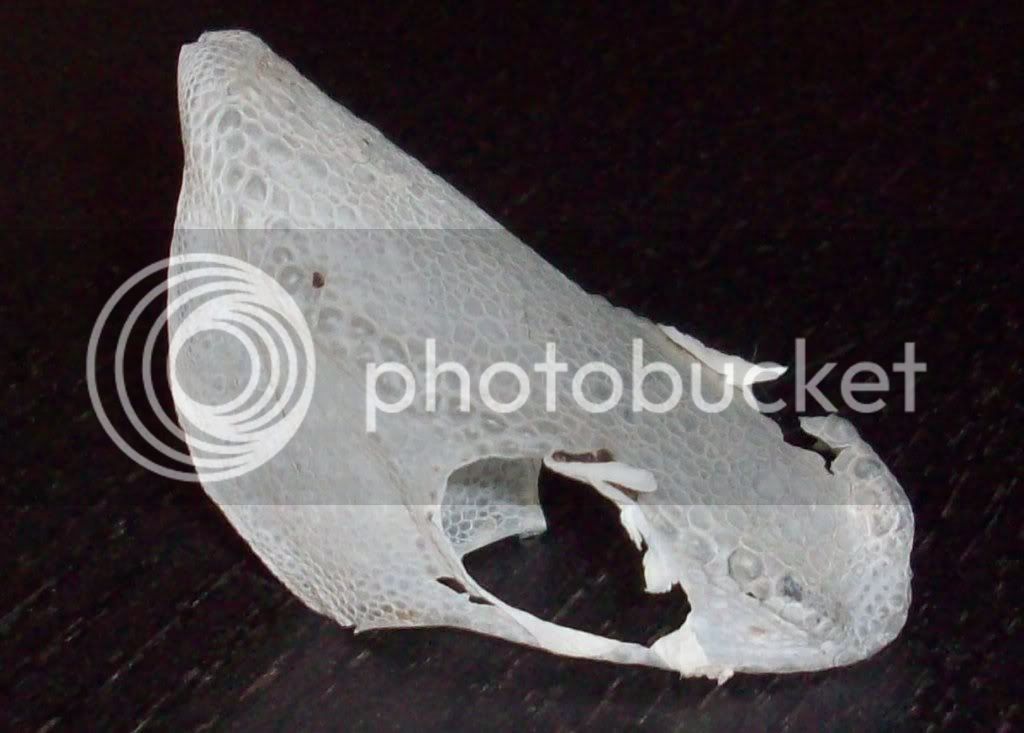 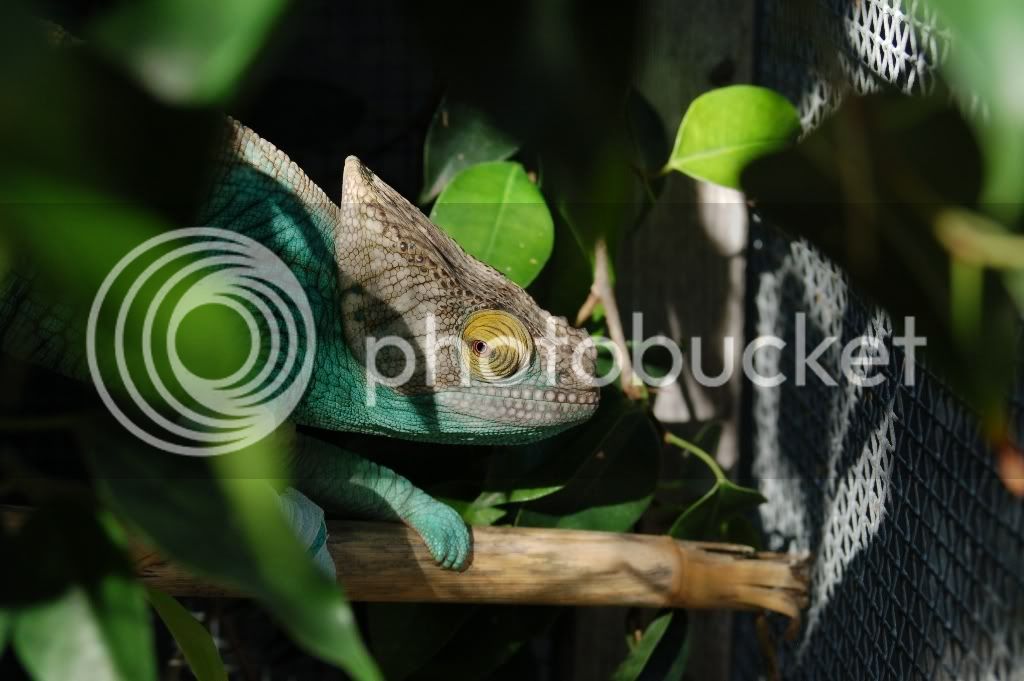 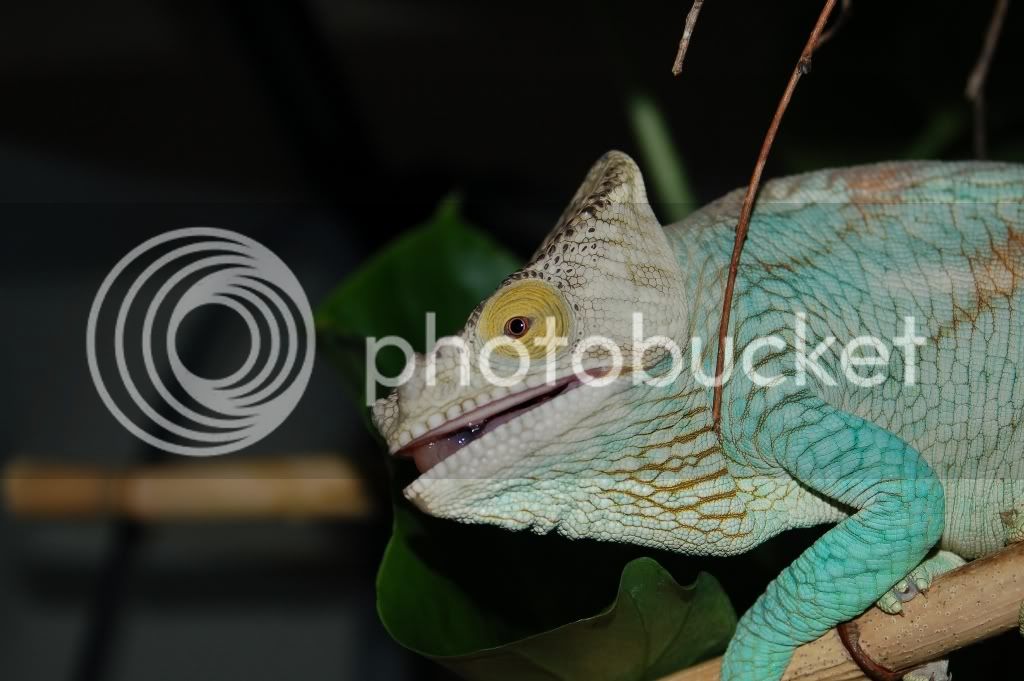 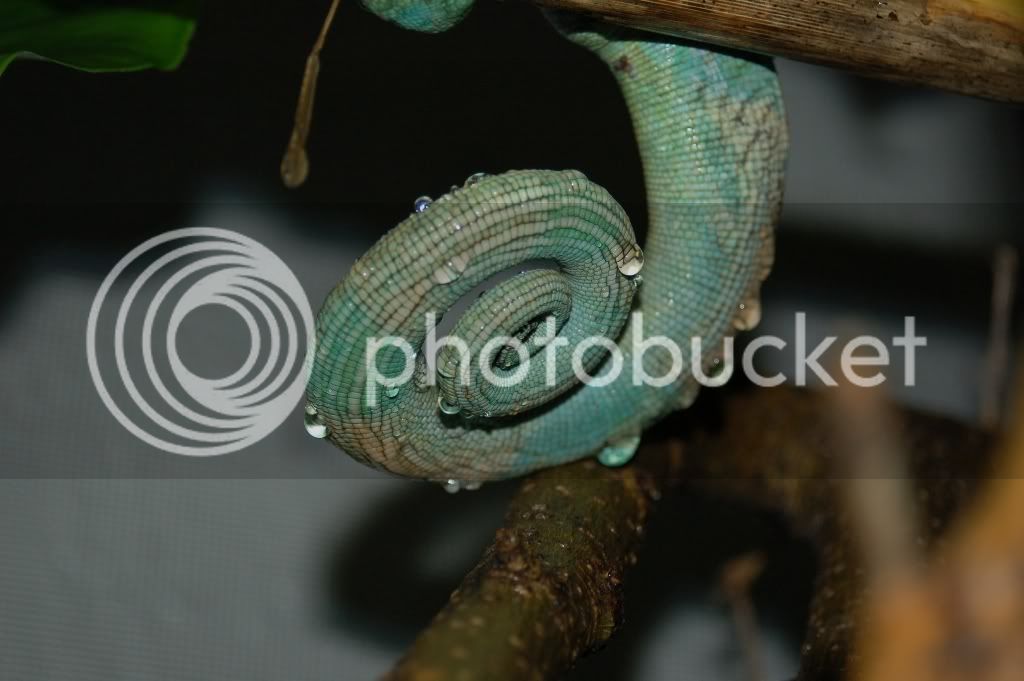 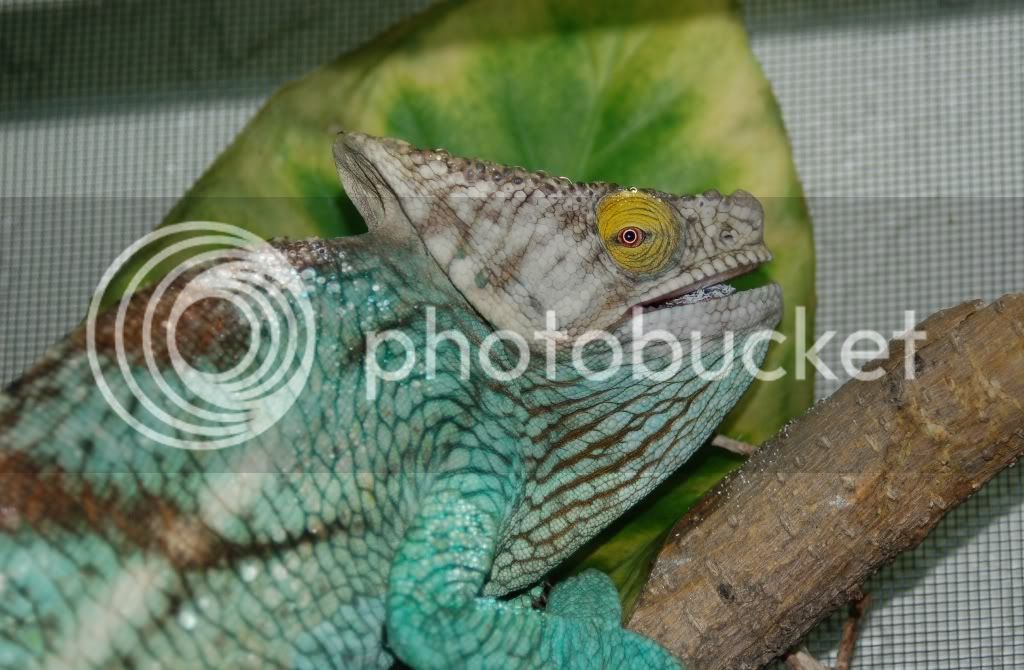 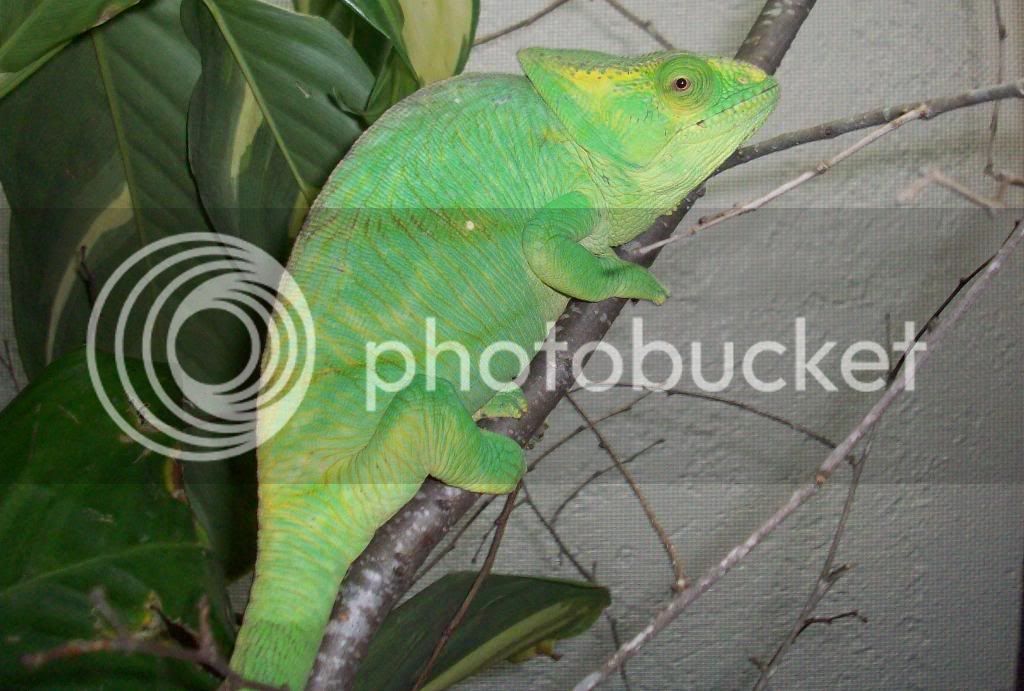 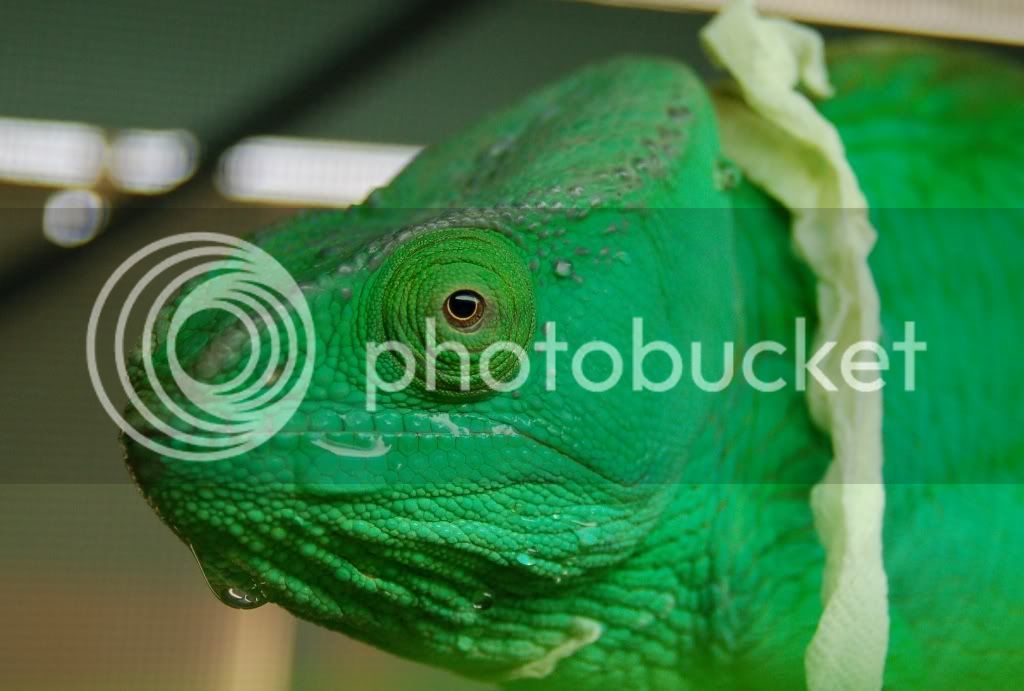 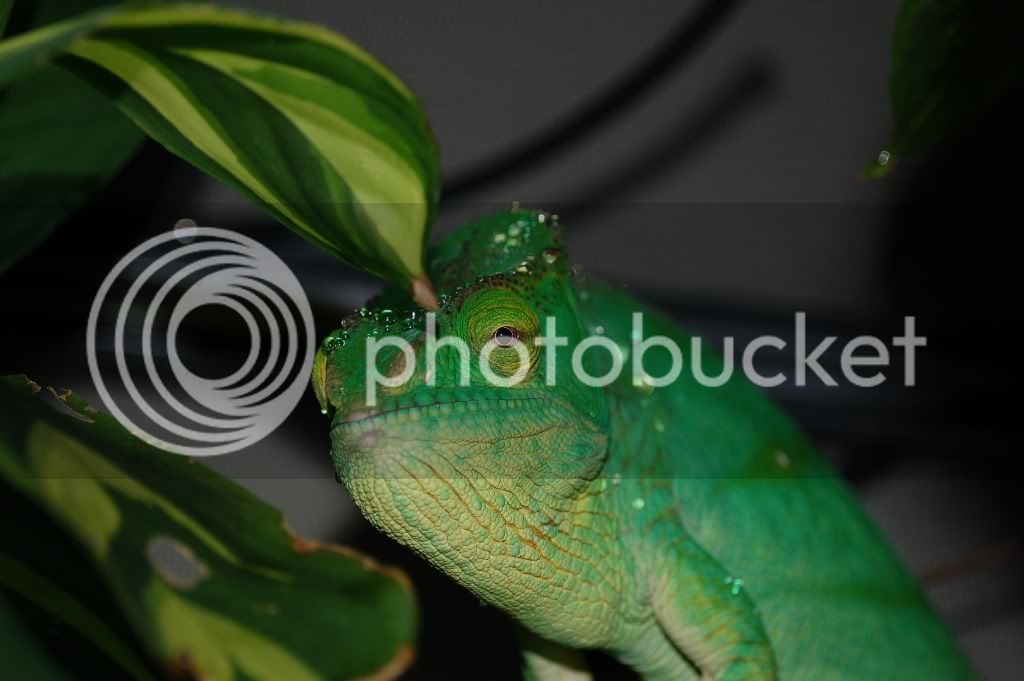 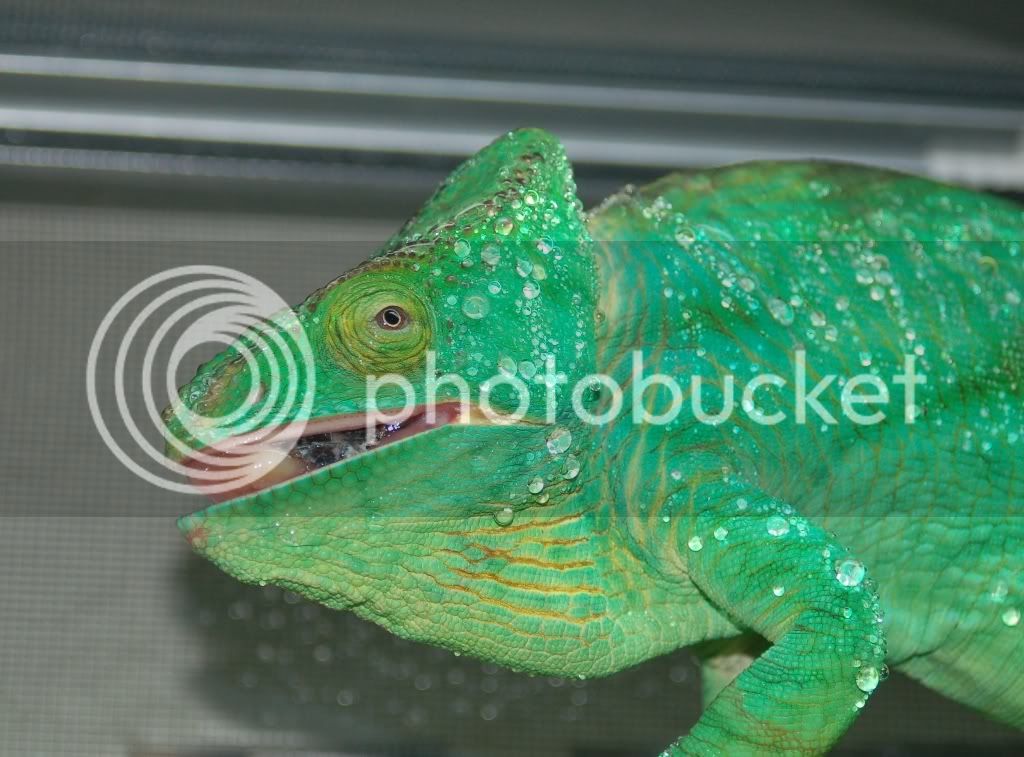 Those chameleons look beautiful. They seem very happy and friendly.

Congratulations on your one year! Sounds like its been a wild ride for all of you guys!


Heres to many more years to come!

but even after all that, if i had the reserves and space for a pair i gladly accept when the time is right that i feel i can care for one, which is in the far far future i hope to reach haha

and i cant imagine the vet bills

Nice story good thing they found you. They are awesome, I love there skin it looks like velvet.
M

They are beautiful. Thanks for sharing. What a bumpy road, I hope all ends well for you guys.

awesome to hear a follow up Kent! Thanks for letting Renee and I meet your pair. AMAZING looking animals, in your photos, and in person!

What a great story Kent, they are beautiful creature’s indeed. Learning never ends it seems Anyhow congrats on a job well done, happy that you were given the opportunity to own this special locale.

summoner12 said:
awesome to hear a follow up Kent! Thanks for letting Renee and I meet your pair. AMAZING looking animals, in your photos, and in person!
Click to expand...

I agree totally, I couldn't help but think they were awesome when I met them. The female is to pretty i could hardly believe it. I guess you could write a will but all the money must belong to vets by now. You can will the pair of Parsons to a good, experienced keeper. But you will outlive them by bunches so you don't even need to spent more money writing a will.

Enjoy them, they are worth it.

BIG THUMBS UP... congrats on them kent they are looking sweet im glad you got them an took care them an put in the hard work it takes to help them strive.. they really are lookin good...

This is why I preach forest conservation in Madagascar. If conservation happens small legal exports of Parsons may happen again in the USA.
Last edited: Apr 23, 2011

That story had me in tears. They have got to make that into a movie with Morgan Freeman narrating of course.
Seriously glad they made it your dedicated hands. Good luck and keep doting on them!

Thanks for the update and pics, Kent!! You have done a wonderful job with them!

They obviously made it to the right keeper. They are very lucky to have you for their dad. I'd like to see pictures of your custom outdoor cages.

WOW stunning!! You have to feel very proud

Job well done Kent. I envy and sympathize with you because they are awesome chameleons and well worth the effort !

As we can read in your post, it was really lucky that they made it into your hands. Not only because of your skill and dedication but because you had the vet resources nearby that could take-on this kind of challange not to mention the financial challange involved in an all-out microbial war . Keep-up the outstanding keeping .

All of your hard work and dedication has certainly paid off. They both look fantastic! Excellent job!

I remember the guy trying to talk me into his outrageous prices and I just had to hope that a few would make it alive and in good hands.


Wow, why does work have to get in the way of me immediately seeing threads like these! Thanks for the follow-up thread update. PS Hello from Northern California.

Hey Chad! Give up work.
You must log in or register to reply here.