Staff member
I have been away for a few days, and noticed nosferatu posted a couple pics in his gallery of his veiled chameleon (Mango) eating a humming bird . I have read some larger chameleons will sometimes do this in the wild, but had never seen a picture. Thanks for sharing. I am curious how easily a chameleon can digest the bones, beak, and feathers of a bird. Nosferatu, do you think this has happened before? If so, did you notice any problems? I am not looking to start feeding my chams small mammals or birds, just curious. 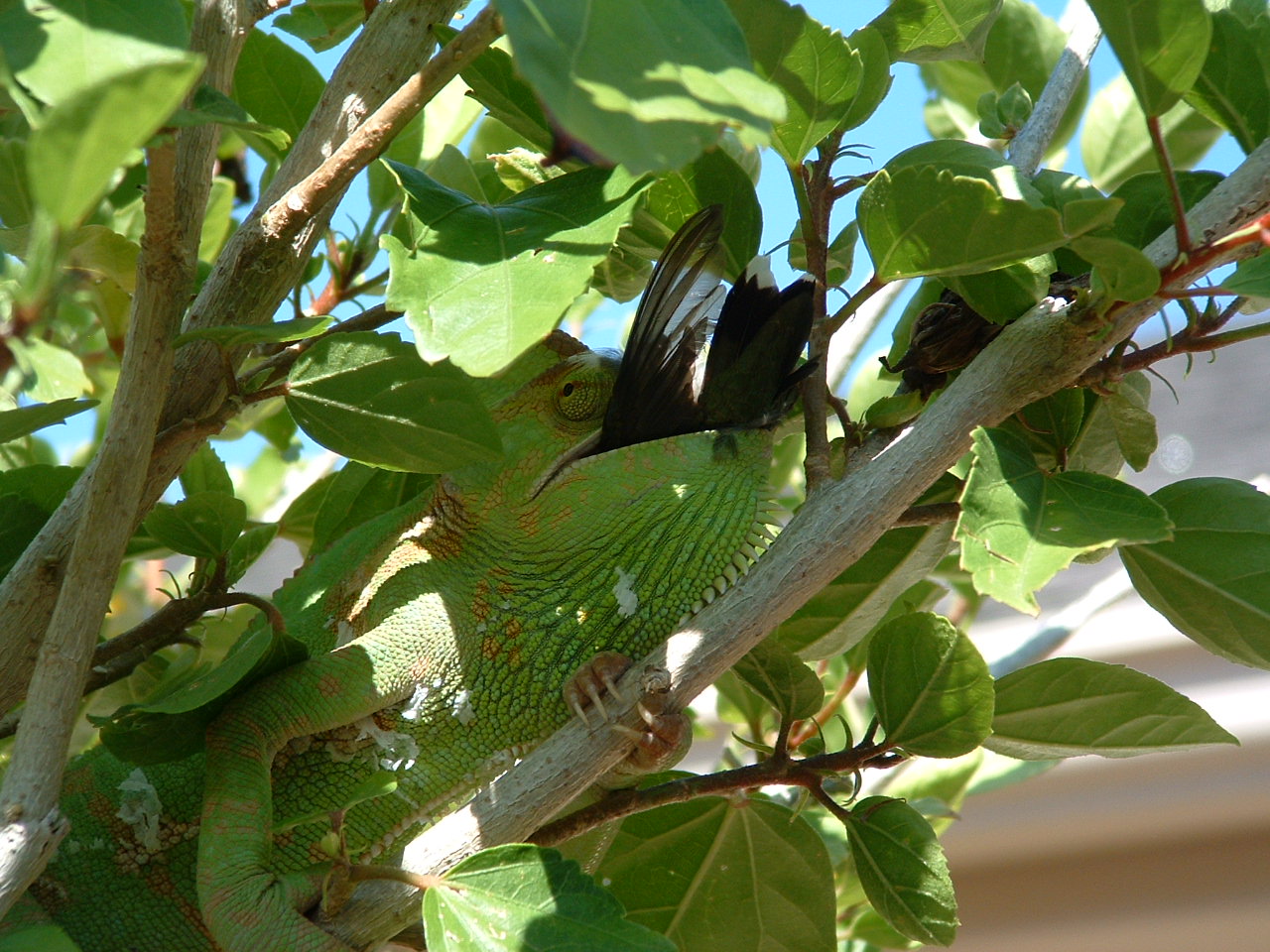 o wow, that is cool
N

[Welcome to the forums Tino]

Yes...Brad...I have also read about chams eating other reptiles, small mammals, and birds in the wild. I know some people who even feed their chams pinkies as treats. I do not know how well adapted the digestive system of chameleons is to this type of prey item. In the case of my female veiled Mango, I was very shocked that she was able to quickly swallow the hummingbird which was probably not much shorter in length than Mango's body (Snout to Vent she is probably between 6 to 7 inches) and was pretty wide in some dimensions. I really don't know where the bird went lol, but it suggests to me that are somewhat adapted to swallow relatively large prey items like other reptilian predators. If she were gravid, I could not see her being able to accomodate the bird though. As far as digestion goes...I am not sure yet. I do not think she has passed much of the bird yet but her activity levels seem to be normal (she has shown increased thirst though). I have not fed her much since but will continue to watch her closely. Although I give her way too much freedom when she is outside and really don't regulate what she eats thay may fly by...I do not think she has consumed any hummingbirds as they just don't ever come around here...don't think I will take her bird hunting anytime soon either

[Tino...remember that it is probably not a good idea to feed chameleons large prey items like birds...I do often feed Mango pretty large dragonflies...she loves them!]

I know of parsonii eating hummingbirds and reportedly digesting their beak completely. I've never seen this but this is what I've been told by a parsonii keeper many years ago who had one that would eat them fairly regularly. Let us know if you see any signs of the beak, etc., in the feces.

Chris...thanks for your input...so far she has not seemed to have any problems digesting the bird as far as I can tell...have not seen any remnants of the beak or feet...maybe some material that may have been feathers but most completely digested...it has been over a week but I am guessing she is still probably digesting some of it. As far as parsonii and birds go...that sounds like a better matchup (have heard they can reach lengths > 30")...so it is probably adaptive for them to pick out a large prey item like a small bird for a meal which could last a few days than waste their energy hunting many smaller insects/day. Unfortunately my female veiled Mango does not seem to be too discriminatory concerning her prey items from...from zapping a poor hummingbird to ant-sized fruitflies.

This thread is amazing, I had never thought it to be possible.

Yeah, I am back. I had changed jobs and moved and been real busy! Nice new forums brad.

Got to be honest, i have a small breeding colony of common geckos as there are hundreds of them here that i feed to my panthers, i have also tried feeding them hatchling sparrows there about the same size as pinkies and go down a treat, sorry bird lovers
M

This pic is amazing. Ive been away recently and missed this picture. Ive never seen or heard of chameleons eating birds!! WOW. Is the chameleon doing ok?
N

Thanks for your comment...I am still amazed myself as my veiled is just an average sized female of about 14"...although I hope she does not accidently come across any large prey items like that again (saw a recent picture of a Burmese python I think that had not faired so well after eating an alligator...glad my Mango did not follow the same fate as that snake; anyway she will be inside mostly as winter is coming soon anyway)...she did not seem to have any problems digesting it...don't know how her digestive tract was able to accomodate it though
You must log in or register to reply here.

C
Landlord allows fish and birds, but not chameleons

cham being picky... need suggestions for the cup?