Silkworms take my stress away!

Okay....
I know I am a late-comer as far as sikworms are concerned, but I have to say I couldn't be happier!
Our first 100 arrived today and Kitty zapped three down in an instant!!!
As you know we've had some issues lately (Kitty and Me) with him being BEYOND picky and me fretting that he's not eating enough....so today I am happy, happy, happy! No more waxworms....(at least not for awhile).
The chow has an "interesting" fragrance doesn't it?

That's just because they haven't started the massive die-off yet LOL! J/K, I have 20,000 eggs on my doorstep right now. Ever since SilkwormFarm.com shut down, I can't afford to buy live worms anymore.
Last edited: Mar 21, 2007

Massive die-off! None of mine died and they were growing so fast that I had to give the majority of the first 50 away! I just hatched 250 eggs and I am sure that every single one hatched and they are also growing at the speed of light! My little guy absolutely loves them. One trick I learned is to only feed the silkies every other day or so to slow the growth down a bit. Does anyone know how long it takes for the moths to hatch out after they cocoon?
G

I believe that it takes about 2 weeks for them to hatch. Just watch out if two of them mate. They stay stuck together for several hours, but then the female runs all over the place laying eggs. I didn't have a top on my container because I've never had any get out and she made a mess with them.

They better die fast!
I'm planning on feeding these suckers off pretty quickly.
Incidently, they arrived from Coastal in pristine condition. Not one dead.
I have them in a freshly sterelized drawer and am scraping freshly made chow with a sterilized spoon.
I know they are somewhat more delicate then other feeders....this is as far as I go though (so far, talk to me in a month when I have decided to start breeding them )

Silkworms are great. They grow really fast. I bought some 3 weeks ago and feed them a little bit of fresh chow everyday and now they look like they're gonna explode. My Cham gets full off of 3 of them in the morning. I only had a couple die on me. They were really small though. Once they get to a reasonable size, it is easier for them to survive when neglected. One time I didn't feed the bigger ones for three days and they're still growing.

I must say-isn't it a little eerie when they lift their little heads up too look at you when you open up the container??? They are actually very beautiful worms!

My biggest problem with silkworms has been that I can't get silkworm chow here in South Africa.

So I have to feed the worms actual mulberry leaves. And I don't have my own mulberry trees.

I can tell you, I get some pretty strange looks from the passing traffic when I stop on the side of the road to cut off leaves from mulberry trees in public places, or from trees that hang over the walls of some people's gardens. My girlfriend has actually done most of the leaf-collecting so far. There is a big tree near her office, so it's become part of her lunch-hour routine to collect a bag of leaves.

The leaves can stay fresh for about a week in the fridge, but they never last that long once the worms get to about the 3rd or 4th instar. 200 large worms can go through leaves equivalent to the surface area of about 4-5 A4 sheets of paper a day.

My latest plan involves setting up a small orchard of potted mulberry trees in my garden. Theoretically we're not supposed to be planting mulberry trees in our gardens anymore because they've been declared an alien invasive species, but I'll justify mine for 'agricultural' purposes...

Ah, the joys of a diversified menu for my chams...

OK-my first moth emerged today. I am assuming that it is OK to feed the moths to my cham????

Yes but why not leave it and wait for others to emerge and let them breed.
They only live for 6 days or so and need no food or water.

Brad-are you just going to let them lay eggs in the container they are in? I was thinking about eggs etc. but really was not sure of how I was going to go about the whole thing. What is your plan?

Julirs said:
OK-my first moth emerged today. I am assuming that it is OK to feed the moths to my cham????
Click to expand...

You can certainly feed them to your cham, but as Brad mentioned, they don't eat or drink anything. So it's impossible to gutload them.

As such I don't think they provide much nutritional value. But they do add a bit of variety to the diet, and may even provide some stimulation for the cham.
I'd imagine the females (the ones with the broader, plumper bodies) would hold more nutritional value, since they're full of eggs - though someone posted the other day that the cham's fecal deposits were full of silkworm eggs after eating a moth, suggesting that perhaps the eggs aren't even digested.

As for egg-laying, the way I've done it in the past is to move the moths to a separate container when they've emerged from the cocoons (be careful with the moths when they come out of the cocoon - they release a orange-red fluid from their abdomen within a few hours after emerging from the cocoon. It stains terribly. I usually only move them once they've released this fluid).

I line the new containers with wax-paper (not sure what you guys call it - it's the stuff my mom wrapped my sandwiches in when I was a kid).
The moths start mating almost as soon as their wings have dried. A couple of days later they'll start laying eggs. Once the eggs are all deposited on the wax paper, I can then remove it, cut it into strips and keep it in the refridgerator. Then I just remove a strip of wax paper every time I want to hatch new worms.
Online sources have indicated that the eggs remain viable for up to a year in the fridge - so far I've been hatching them out for about 6 months and they're all good.

Tygerr-very good information! Thanks! I will try it.

Mulberry trees need a LOT of root space. Then they grow rapidly if you can find a good ground spot in your yard to fit one or two trees.

I worry that a mulberry eating silk worm only diet might not be so GI friendly long term. Any conclusive findings on that?

Julirs said:
I must say-isn't it a little eerie when they lift their little heads up too look at you when you open up the container??? They are actually very beautiful worms!
Click to expand...

lol! they are responding to movement/vibration and are actually taking a defensive posture. The bulge behind their tiny heads with the dark marking are supposed to frighten of potential predators, however they have not existed in the wild for centuries, so it is just a leftover response. Many caterpillars (they are not "worms" ) have all sorts of defense mechanisms from frantically shaking their head to shooting out what looks like a snakes forked tongue (osmeterium) and smells bad, too (the latter being our lovely swallowtail butterfly larva) Here's one that uses the bird poop camouflage and the stinky "tongue" as defense 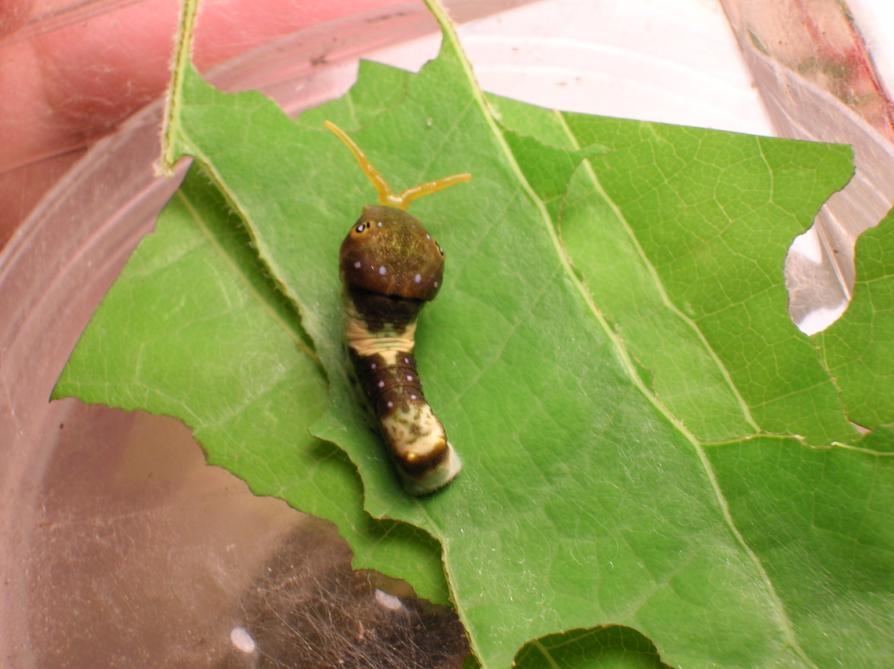 as do many adult moths, like the Io moth which flashes its "eyes" if attacked. Notice the white spot on the "eye" making it look realistic, as if belonging to a mammal.

once again, probably more than you wanted to know, but I just love all Lepidoptera and find them so fascinating that I love to share their strange little world with others

I just counted the silkworms I got from coastal. I included what I've fed off in the last three days in the count (obviously).
I am very impressed with this company!
I ordered 100 with 1/4 lb. chow. With shipping my total was $21.05, that makes them .21 ea. which I thought was expensive but if Kitty eats them (and he does!) well worth it.
Coastal sent me 150 worms. I think a 50% over count is amazing and as I stated before not one dead. They're all still doing great and now only cost
.14 ea.
Just wanted to say how happy I am with the service and product from Coastal Silkworms.

I love the look of the moths -- somewhere between a fuzzy fairy creature and science fiction concotion. Don't know if you can make out all the fur on his face and legs (I will have to learn how to shrink jpeg files without losing so much). The antennae are wonderful, very soft and the males clean them incessantly. The seem to work as ticklers. All that design for just a 5-7 day life expectancy -- ain't nature curious?
Anyway, if you let catepillars spin their cacoons in pieces of paper towel roll, which they seem to appreciate, then when the moths emerge they'll hang vertically on those to mate, and the female will lay her eggs on the outside of the roll. The eggs stick -- very convenient. And fast. I may be the only person in the neighborhood with deconstructed paper towell rolls in my refrigerator crisper, but it works and saves a ton in shipping costs.

Hi!
I did talk to Brian(I think the owner of Mulberry Farms) and he told me that when Silkworms reach over 1 inch in length, you can subsitute shredded carrots for the Mulberry mash/or leaves and they will survive on that diet.
It's good to know if you ever run out of the Mulberry food and it's easy enough to buy shredded carrots as a subsitute and it's a great gut-load for Chameleons. too!!

chrisandpugs said:
Hi!
I did talk to Brian(I think the owner of Mulberry Farms) and he told me that when Silkworms reach over 1 inch in length, you can subsitute shredded carrots for the Mulberry mash/or leaves and they will survive on that diet.
It's good to know if you ever run out of the Mulberry food and it's easy enough to buy shredded carrots as a subsitute and it's a great gut-load for Chameleons. too!!

THANK YOU!!! That is MOST VALUED information on the subject of silkworms I can hear Fractal now.... YIPPEEEeeeeeeeeeeeeee.
You must log in or register to reply here.

Goodbye to my Danger Skittle, Toby

Help! Does he look okay? I'm afraid he might be sick or he might get sick soon
2