* Your Chameleon - Male, Translucent Veiled Chameleon, Age unknown (but would guess somewhere between "baby" and sub-adult" ... he can sit entirely on my index finger! so cute!)
* Handling - Not often, maybe twice a week - but he surprisingly very comfortable when handled (doesn't get stressed out easily)
* Feeding - Gut Loaded, lightly Dusted Crickets every day and the occasional butter or wax worm...
* Supplements - (see above) ...Using ReptiCal and Total Bites...
* Watering - Has a drip system in terrarium.
* Fecal Description - Unknown. (Only had him for three days and he hasn't pooped yet...)
* History - Unknown. (Only had him for three days - got him from a local, trusted pet store)

* Cage Type - Screen Terrarium, Approximately 2 feet X 2 feet X 4.5 feet
* Lighting - Solar Glo Professional Series 125W (UVA, UVB, Heat... all-in-one sorta thing)... on a timer from 10:00 AM to 10:00 PM
* Temperature - The temperature is pretty steady between 79F and 82F (no lower, no higher)...using a digital ExoTerra thermometer...
* Humidity - Usually at around 60% + ...using a digital ExoTerra Hygrometer...
* Plants - No Live plants in his terrarium.
* Placement - The cage is in my bedroom (fairly low-traffic), not near a window or any vents or drafts... it sits on a platform with wheels (locked so it doesn't move) that lifts it about 2-3 inches off the ground... not close to the ceiling...
* Location - Ontario, Canada (GTA Area)


* Current Problem - So! I recently lost my beloved Izzy (she became egg bound...) but was pleasantly surprised with a new little guy, courtesy of my brother. As I said is just a little guy (named him Rango) - is a translucent veiled cham and he has a healthy appetite, he drinks his water, he's active, etc... but over the past couple of days that I have had him I noticed that every once in a while (I've only witnessed it three times) he shudders. It's almost like he's chilled or something - like his whole body just shivers for a split second... He doesn't seem to be ill or anything, but I have never seen a chameleon do that. Could it possibly be that he was under supplemented prior to me owning him, and that's causing the shuddering??

Thanks in advance for your help!

i kick myself in the butt for not buying a female translucent at the chicago show all the time. i want to see pics!! sorry i dont have any idea on shivering with temps in the 80's although personally i would raise them to 85 basking and room temp floor.

just a quick observation of your husbandry. you have one part of the dusting schedule but will need two others. plain calcium without D3 every feeding and calcium with D3 twice a month and a multivitamin twice a month. are you spraying at all or just relying on the drip system? lights- are they linear bulbs, coil or cfl? pics of the chameleon and set up would be helpful.

Hmm ok well. The ReptiCal that I have has D3 in it... so I see I should cut back on that (drastically) and get some plain Calcium (if I can find any.. I remember it being impossible to get Calcium without D3 when I bought this supply...)

Another thing that just occurred to me - the link you provided says a 12 hour light cycle, which I'm doing.. but the past two days he crawled into his "Bed-spot" (hidden away from the light in the leaves in the same corner every night) a couple of hours before his light went off, and was asleep about half an hour before his light went off... should I be worried about this behaviour? Could it be that he's just a baby? Or possibly a sign of relocation stress??

I just really hope he's not sick - I'm so paranoid after losing my first cham, Izzy - everything I think isn't normal freaks me out and I think he's sick or something.. gaah!

Also here are some pics 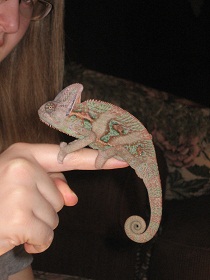 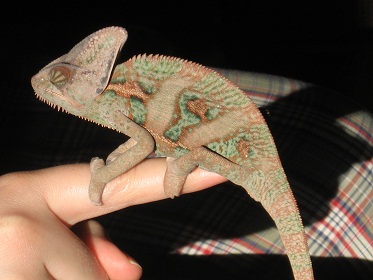 Help is this gout