Senegal Chameleon not eating or drinking

Current Problem - The current problem you are concerned about. My chameleon will barely eat or drink. She is not lethargic or anything but has only eaten a total of 6 crickets since I've gotten her and 2 waxworms and I've had her for about a week and a half. She was drinking water but around 2 days ago, she just ignored the water. She would stare at it but she has not drunk it. It does drip and she didn't have problems with it before. We had an appointment for a vet but an emergency happened and not we are not able to afford a vet visit for a couple more weeks. I am unsure of what to do to try and fix this problem at home so she'll make it to the vet appointment.

She has always been beige with some green lately but she looks skinnier and slightly dehydrated to me. I have attached a picture of her that I took today when her fogger was on. There is bell pepper on her leaf next to her since I tried to get her to eat something else if she wanted it but she also refused that. She also normally has more plants in there but some are being cleaned. 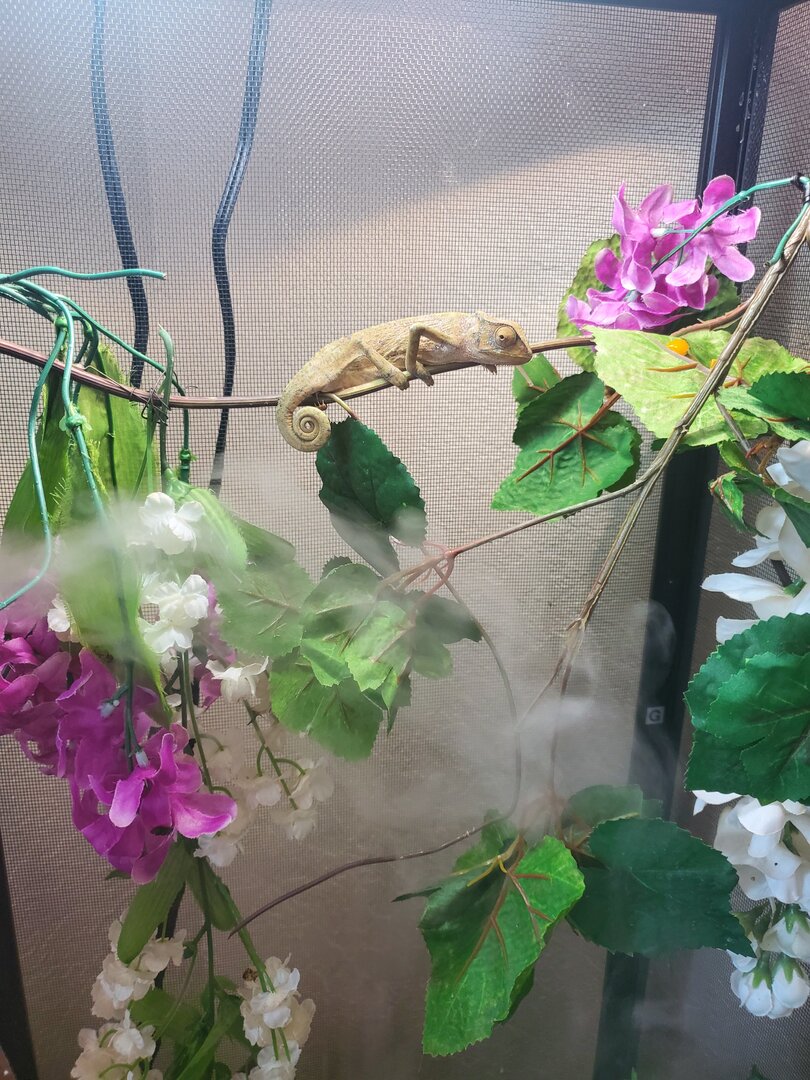 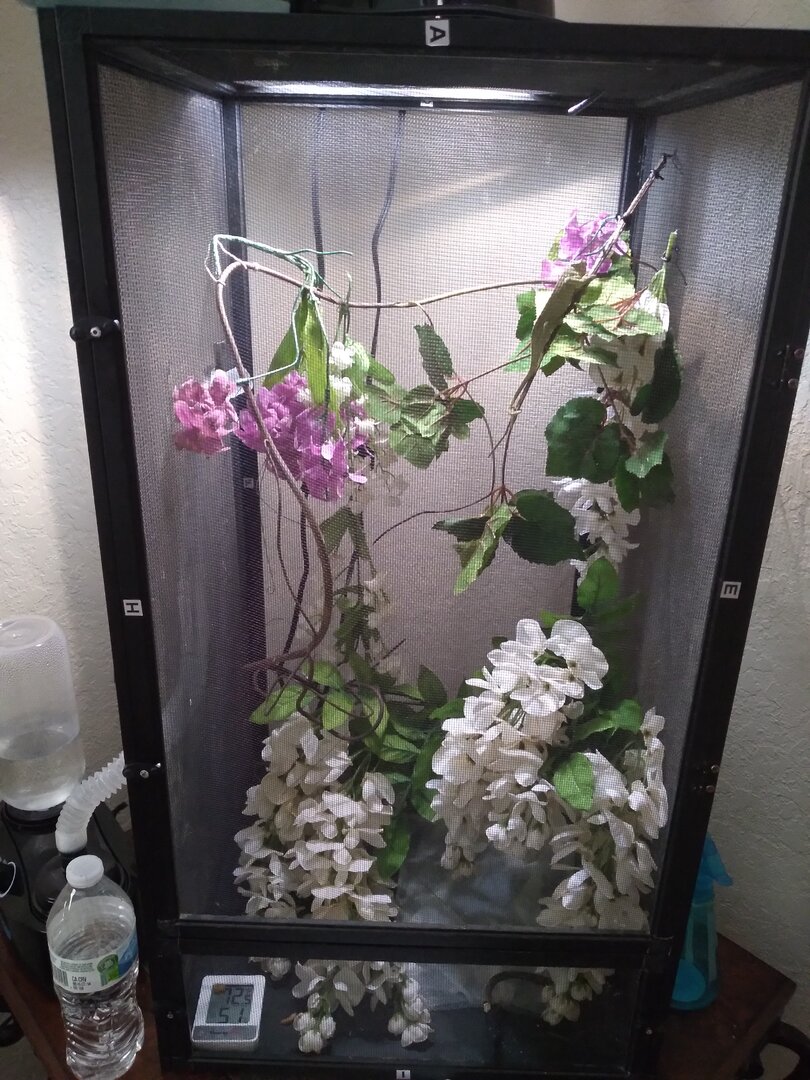 Could you post a picture of her entire cage, please? Also, what is the brand, strength, and type of UVB bulb? Has she ever been tested for parasites? I think @kinyonga has kept these before
A

ERKleRose said:
Could you post a picture of her entire cage, please? Also, what is the brand, strength, and type of UVB bulb? Has she ever been tested for parasites? I think @kinyonga has kept these before
Click to expand...

I just added another picture of her cage. It's a little bare right now since I'm cleaning some plants. I believe it is a T8 reptisun 10.0 UVB but I am not completely sure since I threw the box away. It could be the 5.0 UVB. The breeder i got it from said she was tested for parasites before we got her and she was clear but we personally haven't since we had to cancel her vet appointment for now.

So I do not know specifics for senegal's but 90 seems way too hot. I would reduce back to 80. You should not be fogging at all during the day when lights are on. This is an RI risk. Only at night and only when temps are below 67 degrees.

You need real plants to fill out that cage. Try home depot or lowes and look for the ones in the link here. https://chameleonacademy.com/wp-content/uploads/2021/06/Chameleon-Plants-061321.pdf

She is extremely exposed and those fake plants are not made for reptiles so there will be risk of the dye leaching out when wet.

The light pattern does not look like you have an actual linear UVB fixture. Can you take a picture of the top of the cage so we can see the actual fixtures.


@kinyonga do you know specifics for senegals?
A

So final update: I did end up taking her to the vet because she really didn't look good today and she actually had extremely bad parasites so the breeder either didn't check or they lied about the results. I surrendered her to a reptile expert who has far more experience than I do with reptiles and he will hopefully be able to get her back in good health. Thanks for your help!
K

Sorry I took so long to reply...I had a few things I had to do that took longer an unexpected today and I couldn't put off.

Is she supposed to be CB?

First thing that hit me when I saw her was parasites. I hope the vet she's with knows how to treat chameleons with a heavy parasite load. More in a minute.

IMHO 90F is too hot for her. I used to keep mine around 83F usually. They are real water hounds IMHO in captivity....don't know about in the wild.

@Beman ...I wondered about the lights too.
K

Regarding a heavy load of parasites...
If you kill them all off at once you hand the chameleon's system a big load of "garbage" (dead parasites) to get rid of and the immune system may very likely not be able to handle it all at once. In a way, the live parasite load is tolerated to some extent until it's killed...so killing them more slowly gives the chameleon less "garbage" to deal with at one time.

I think feeding the chameleon more while all this is going on may help too because the parasites are sucking up a lot of the chameleon's food/nutrition.

Are you sure it's a female?

More about their care in a few minutes...
K

I've found Senegalese to be fairly easy going once they are acclimated and the parasites are taken care of. They may be plain in the color department but make up for it in the personality and interest department.
They can be kept very similarly to veileds as a rule.

This is a very interesting article...but don't try to keep them in a group should you get more....it's something I wouldn't recommend to someone who hasn't kept chameleons before for sure...
http://www.chameleonnews.com/08FebFrancis.html
A

If CB means captive bred, she was supposed to be but I have my doubts considering her parasite situation.

The picture of the tank is a few days old since I wasn't home to snap a new one. She came with the enclosure and the lights so we replaced the UV bulb with a hood and a UVB light around 3 days ago. I put it so everyone could get an idea of what it looked like and I was going to update the picture when I got home but we ended up taking her straight to the exotic vet we had locally and then to the local reptile expert so he could take over care while she was getting treatment since I have never had to give any of my reptiles treatments before.

She was barely eating for the full week and a half we had her and she just stopped drinking as much which I know is strange for senegals since they're known for drinking so much water. The breeder told me to soak the fake plants for a couple days for some reason so I was doing that when she stopped drinking water so maybe it was because she was exposed? It's why the tank was so empty in the picture and maybe that stressed her out. I have never had a senegal before so I didn't know what the normal was for them. She was supposed to be a veiled chameleon but we were surprised with her so she was new to me.

I'm going to completely redo the enclosure IF we get her back or if we get another chameleon since I didn't know about the fake plant issue and I will keep in mind temperatures for the basking spot.

Thank you for your help! It was muchly appreciate. I will update this forum when I get an update on her but I am hoping for the best since I handed her over to someone who is more experienced than I am.

Good luck!
You must log in or register to reply here.

Cham climbing top of cage & acting like a daredevil

Chameleon lifespan or some other problems ?
2 3

My chameleon has become lathargic in the last 2 days
2