I got in an order of pygmy chameleons today! They are really cool, I can't quit staring at them. I bought five, one male and four females. They are housed in a 65 gallon terrarium. I have seen lots of pictures of them, but still wasn't prepared for how small they are. Cute little buggars. 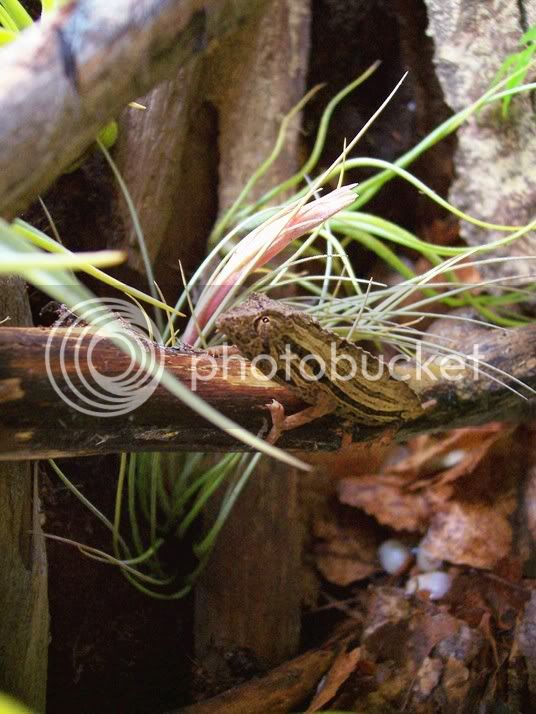 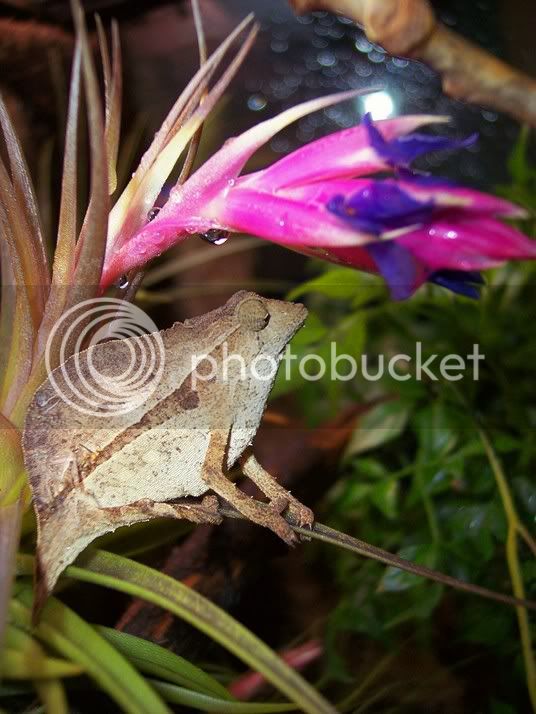 She looks like a stick in this picture. She is the smallest of the group: 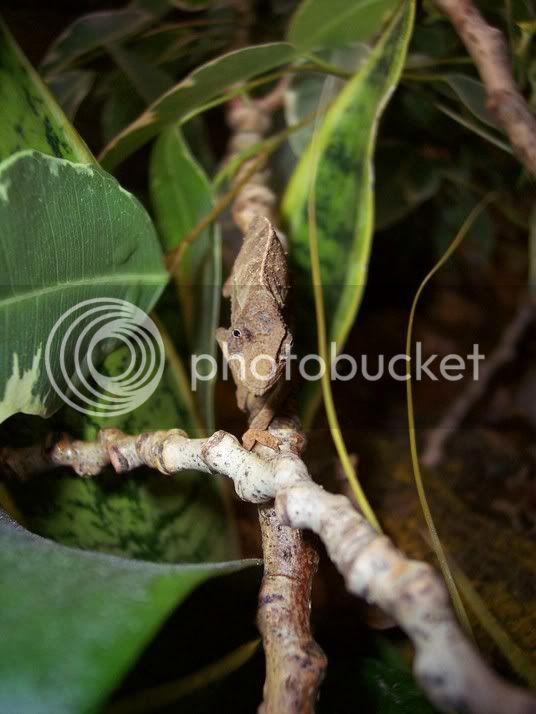 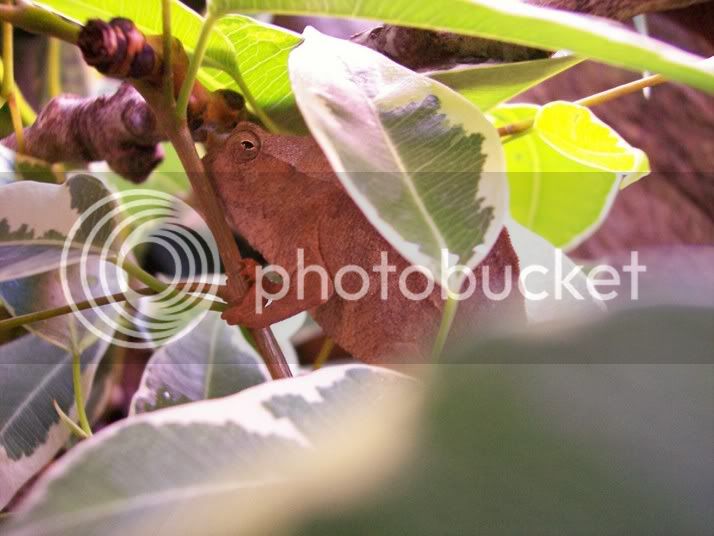 This last little female came in injured. The injury looks old and is on her rear right hip. She can't seem to grasp with that foot, but she isn't slowed down and doesn't seem to be in any pain. In this picture, she is climbing on top of the wall that is on the back of the aquarium: 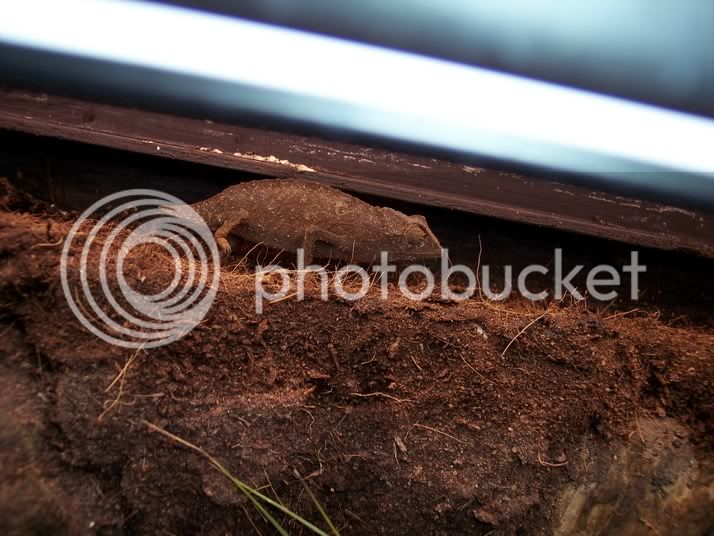 Here is another pic of her hip: 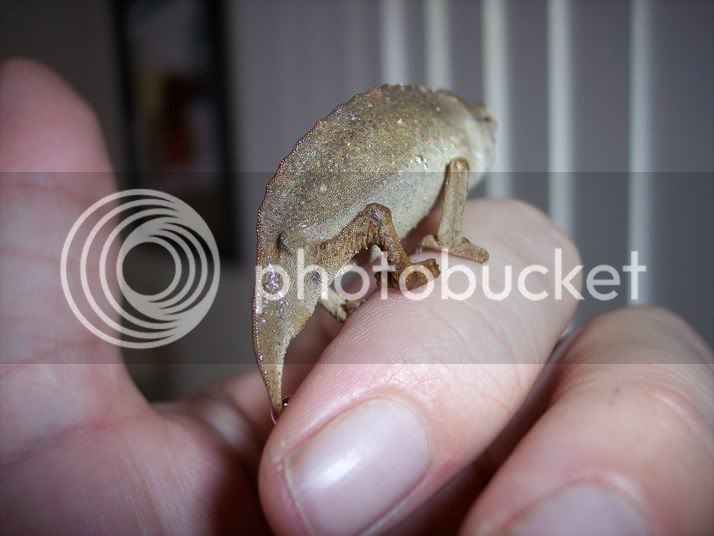 Cute little guys....Maybe someday I'll get enough time to put together a good setup for some little Ramph's. One can only hope.

They are cute. Do they get big? Will you always be able to keep them together in one enclosure or just now while they're little?

That is as big as they get. They are adults. They can be housed together successfully as long as there aren't more than one or two males, unlike most other chams.

do any of them look gravid. they are cool looking where did you get them from

The are adorable Heika! I am looking forward to when I get my business all set up so I can add some more species of chameleons. Have you ever owned any before? What are the differences in care that they need and/or habitat from the other chameleons we frequently discuss here on the forum? I'd be interested in hearing about them .

PS. It almost looks as if the older one has a broken hip. It may have happened in transport or could be old as you said. Keep a good eye on it and her. If it happened in transport, she may need some pain meds and antibiotics or something of the sort to prevent infection.

Jenna, have you had a cham with a broken hip before? Is that what it looks like? I am going to take her to the vet today, but I am afraid that with such a small little animal that there probably won't be much they can do. She doesn't seem to be uncomfortable, and she trots around on that leg like she has been doing it for a while. She was rocking back and forth at the little male yesterday when he made a friendly approach, and held that leg straight up in the air. My concern is that if she does breed, laying eggs with a broken hip would kill her.

Jville, there is one that I am almost certain is gravid. Another one of the females looks like she may be also. There is a young one that doesn't look old enough to be gravid, and then the female with the hurt hip. She doesn't look gravid, either.

I have wanted some of these little chameleons for a while now! The preperation has taken a while because I wanted to take my time getting the tank together. Buying all the plants, the substrate layers, etc. and then putting it together was alot of fun. I was going to order the chams from "Roo", a pygmy breeder on the East coast, but he didn't have any available when I was ready to order. I really wanted chams to arrive at the beginning of my spring break from school so that I could spend some time making sure they were acclimated. I ended up buying WC pygmies from LLLReptile because they aren't far from me and have a pretty good reputation, as far as wholesalers go. I bought the last five they had... in fact, I originally ordered another male and female for a total of 7, but they didn't have that many. I have seen them popping up on Kingsnake lately, and "Roo" may have some CB available soon. There are a couple of really good articles about the tank set up needed and the chameleons themselves on Chameleon News:

I have never owned any before. They require high humidity and lower temperatures than panther chams, and no basking light! Also, they don't require UVB lighting because they are forest floor dwellers. I am using one anyhow, a reptisun 5.0 and a plant bulb too. Keeps the cage well lit and makes me a little more comfortable. It doesn't take long to have it drilled into your head that a chameleon requires UVB lighting, and not doing it just feels wrong!

No, I have never had a chameleon with a broken hip. Thankfully so! It could have nothing to do with a her hip at all, it just appeared to me that "some" type of "something" seems to be displaced or poking in a place it shouldn't be. Which made me think like a human and think of a bone . I am glad you are taking her to a vet, as he will be much more knowledgeable about what that bump is above her leg.

But, if she's moving around and lifting her leg fine, I am thinking as you are, that it must be something old and doesn't seem to bother her. As far as breeding her, I think your vet would be a great person to answer that question. It very well could be she won't have any problems at all! Oh my gosh, little Pygmy's!! I can't even imagine how little they would be once born.

They are really cute and sound easy to care for.

Let us know what your vet says.... I'd be interested to hear what she has above her leg.
0

I recently purchases my first Pygmy Chameleon and am enjoying watching her. I am interested in getting another male and perhaps one more female. Could anyone give me some breeders sites that I could purchase them from. I got my first one from Reptile Depot but would like to get different blood lines.

You can find excellent care advice as well as a few places to purchase R. brevicaudatus here, http://www.chameleonnews.com/brevcare.html

Contact Mike at FLChams at (239)560-5523 or www.FLChams.com. He carries a nice selection. He'll treat you well. He has some yellow phase, blue eyes available.

By the way, I just talked to him and he's lost his voice so don't be scared!!!

Fl Chams has Rhampholeon Nchisiensis available. They look to be very cool little chams, but probably shouldn't be mixed with another species. If you purchased your first from Reptile Depot, chances are very good you have a R. brevicaudatus. I would strongly recommend a CB R. Brevicaudatus from Wild Eye Reptiles, now that they are available again. Good price on the trios, Jason. http://www.wildeyereptiles.com.

Site Sponsor
I actually have Nchisiensis and Brevicaudatus. I just haven't posted their availability yet. I prefer to keep them for atleast 2 weeks. When they first come in it's better to aclimate them for a couple of weeks.

Hugs to ya both... I tell you what, I'll settle this.... How about a panther chameleon Marsha? Hehe.

Beautiful pics - thanks for sharing

Heika - I love the second pic of lady with flower! Nice big tank for them! That is great - I have my beardie in a 65 gal, I can just imagine how much fun it would be to set up one that size!

I had a 1:2 trio a few years ago and will be getting more this summer, I hope. Enjoy!

Thanks, Brad and Lele!

They are really cool little chams, I really really like them. I want more..

I love that flower picture, too. Amazing that I took it, it turned out so pretty!

Love that you have them in a large 65gal setup we're planning the same thing so its lovely to see someone has succesfully done it and we're not mad Great photos too!

Any more of the setup you run would be great!!

Love that you have them in a large 65gal setup we're planning the same thing so its lovely to see someone has succesfully done it and we're not mad Great photos too!

Any more of the setup you run would be great!!

Is Tom R. (roo) keeping chameleons again Heika?
Kevin
You must log in or register to reply here.