Here are my Oorana Mena . We had lightning and rain all day, they liked it. I didn't.
They get whiter with age, he's only a juvenile.
The other pink one is the female.

Thank you. Being WC the male is a handful, he tagged me once and it did hurt for awhile.
Last edited: Jul 29, 2007

Nice Nice Nice...hope you will have clutches coming soon!

Sweet animals! Is there an approximate age that they start getting the white?

I would guess it would be the same as other panthers a year to a year and a half . I'm working on unknown ground .

I had to come back and look again. I can remember back in probably the early or mid nineties seeing animals at a show that I think looked like your male. It might have been John Uhern if I remember right. They were blue, but looked different than Nosy Be's. They didn't have any of the white that I've seen in recent Oorana Mena pics though. Just got me to wondering if those could have been this locale because I've never really seen anything like them again.

Speaking of white, why doesn't anyone work with I'le Ste. Marie animals??

We had a WC male Tamatave that tagged me and ripped my finger wide open... still have the scars! He was a terror.... here is a pic: 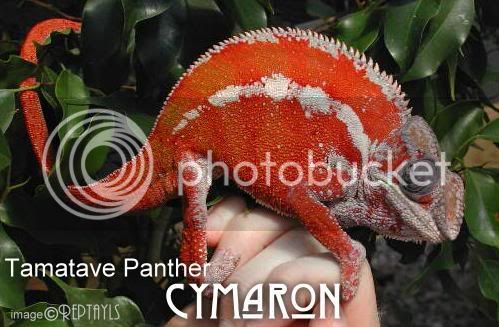 We purchased him from BeBe just after the company split. Cymaron was with us for a good long time too. Unfortunately we only found one tamatave female to breed him to and it was too late - none were fertile. Sad that his bloodlines couldn't be passed down.

He nailed hubby a couple of times too - but not like when Cym bit me. After that, I was a LOT more cautious of him - but I didn't back down. I just put on gloves and let him bite. After a while he just quit - but he still flared a bit.

I still watch for Tamataves in the ads....
U

i want i want!

Dean Pulcini said:
Here are my Oorana Mena . We had lightning and rain all day, they liked it. I didn't.
They get whiter with age, he's only a juvenile.
The other pink one is the female.
Click to expand...

Who told you that they get whiter with age? And Do you know if they are WC of CB I am interested to know who all has them right now. Thanks!

I've seen adult pics and they were whiter and had more red in them. As far as I know they have not been bred in the U.S. as of yet. Vince 0f Screameleons has a few we got ours over the winter thanks to him. Hes got pics of adults on his project web.

I have 2 clutches so far from mine still in egg. How long is your male V TO S . We that have them need to keep in contact to do breeding projects in the future. Have you seen my male?

As you can see from the pics hes big and not full grown yet . I have not measured him but hes bigger then my male Mafana who's 2 yrs old. Wild caught get a good head start when there born. Yes I have seen your male on your website very nice. I plan on breeding in 2 weeks the female was young when I got her shes ready I think . Shes receptive when they see each other .

Because of all of the discussion I'm reposting these .

Where are the Faly babies now??? Updates???

Best I could do Tex hope these help.

These were one of the first to enter the country winter 2007.
You must log in or register to reply here.

What should I do?