New to the club... Introducing "Pip"

I just wanted to share some pictures of my new baby, whom I have named "Pip". I picked him up yesterday from a family that didn't want him anymore and it was obvious that they weren't doing much of anything to care for him. His enclosure was a joke, he hadn't been fed in over four days, they hadn't been utilizing a heat/basking lamp in months and the uvb light was about a year old. They had dragged him, cage and all to the front door and just expected me to throw him in the car. I made it clear that I would NOT be moving him like that and had brought an already warmed box with a cushy warm towel inside for him. As I opened his cage, they started to fidget and began to say, oh he hisses and gets upset. I calmly said, we would all be fine as I tried (for the first time ever) to pick up a chameleon. *I should note that I've been scouring the web/forums/etc. for information on chameleons, their care, enclosures, feeding, etc. for months. I practiced what I had watched in several you tube instructional videos and magically this supposedly vicious, hissing chameleon slowly, but gently accepted my hand and we took our first steps towards friendship. I realize that it will take a long time to undo the damages done by this family, but I fully intend to do all that I can to make the rest of "Pip's" life as good as I can.
In hindsight, the fact that I am OCD helped me to be better prepared for this as I had already purchased several plants that were chameleon safe along with other necessities, calcium supplements with and without D3, Multi-vitamins, two different types of worms and a few other accessories that had caught my eye. I had to run inside the petstore (my daughter held the box in the car) and purchase two dome lamps along with a basking lamp and a new UVB light.
I cleaned out his enclosure redesigned the one savageable item (a bendable fake branch/vine) and added the plants, accessories and setup the lighting and drip system and I was ready to see how "Pip" liked his new enclosure. Again, he was nothing but gentle when I picked him up. He took to his new enclosure wonderfully. Exploring a bit while I prepared his meal of crickets dusted with calcium with D3 and multi-vitamins as I couldn't be sure when or if he had received anything before. I also placed one giant worm and one butter worm on the flat area of a fake tree in the bottom. I had already misted his enclosure, so I lightly misted again and closed it up, then waited. Anxious to see how he would do in a completely new environment.
He climbed right up to enjoy the heat from the basking lamp and less than 20 minutes later began to hunt down each and every cricket along with both worms. I know this sounds odd, but he looked so happy afterwards.
I have so many different things to learn about Chameleons and hope to be able to share many great memories with y'all. 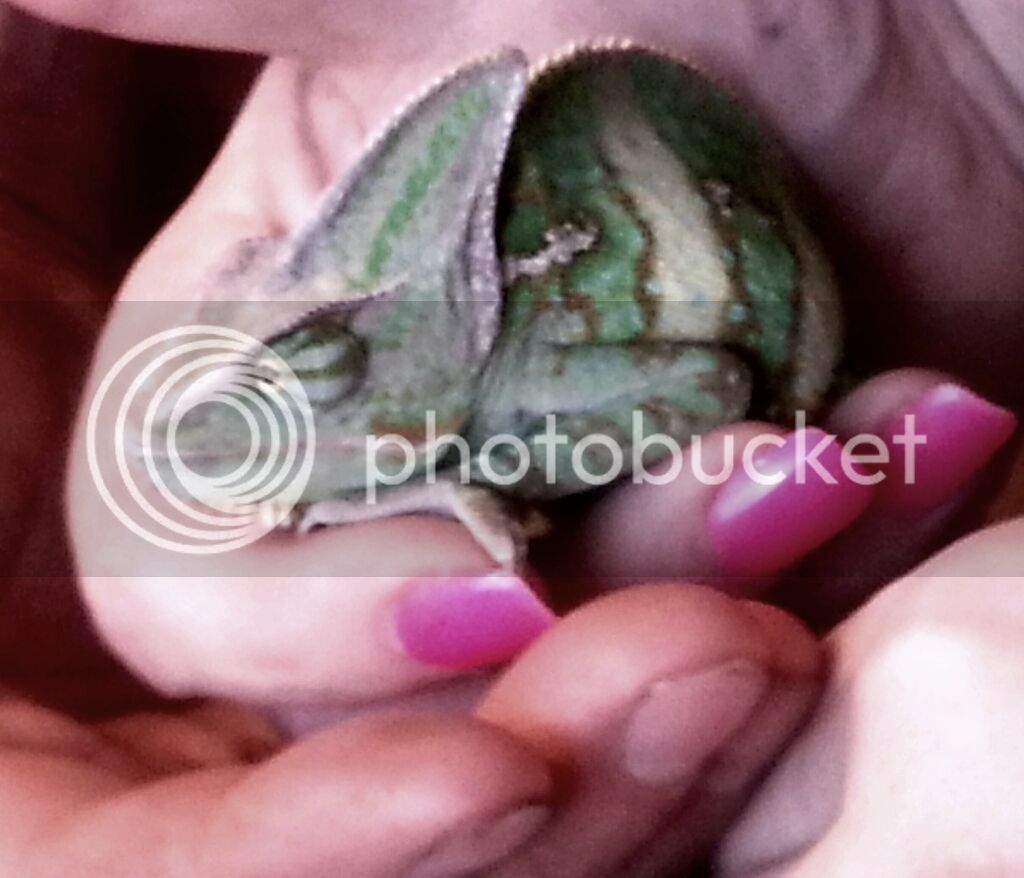 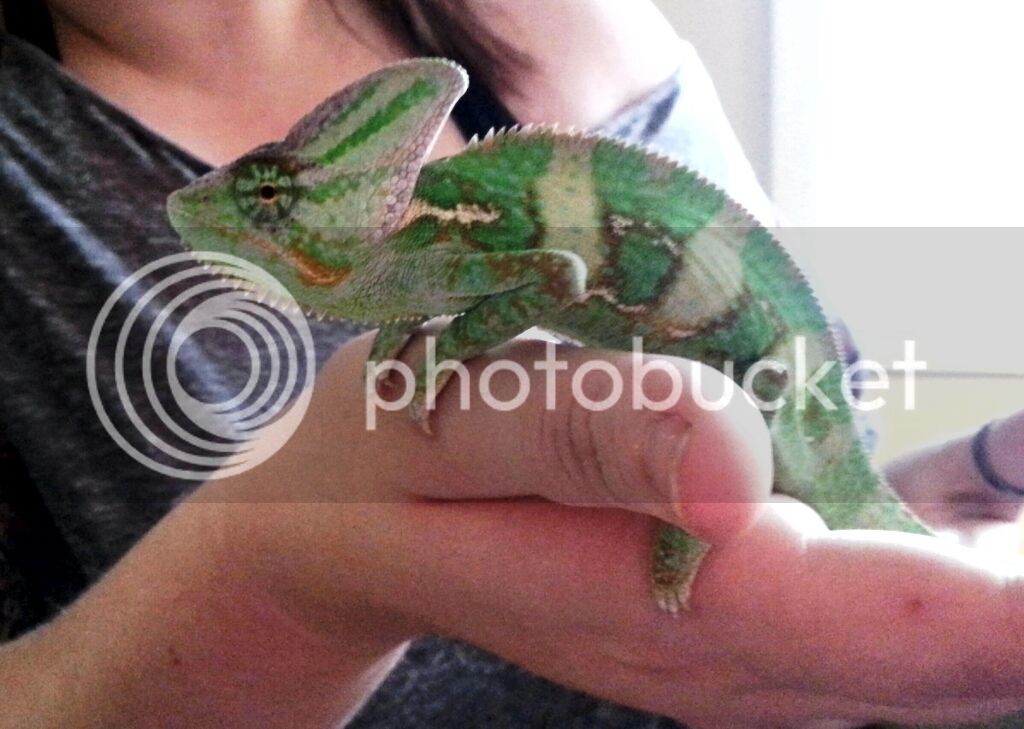 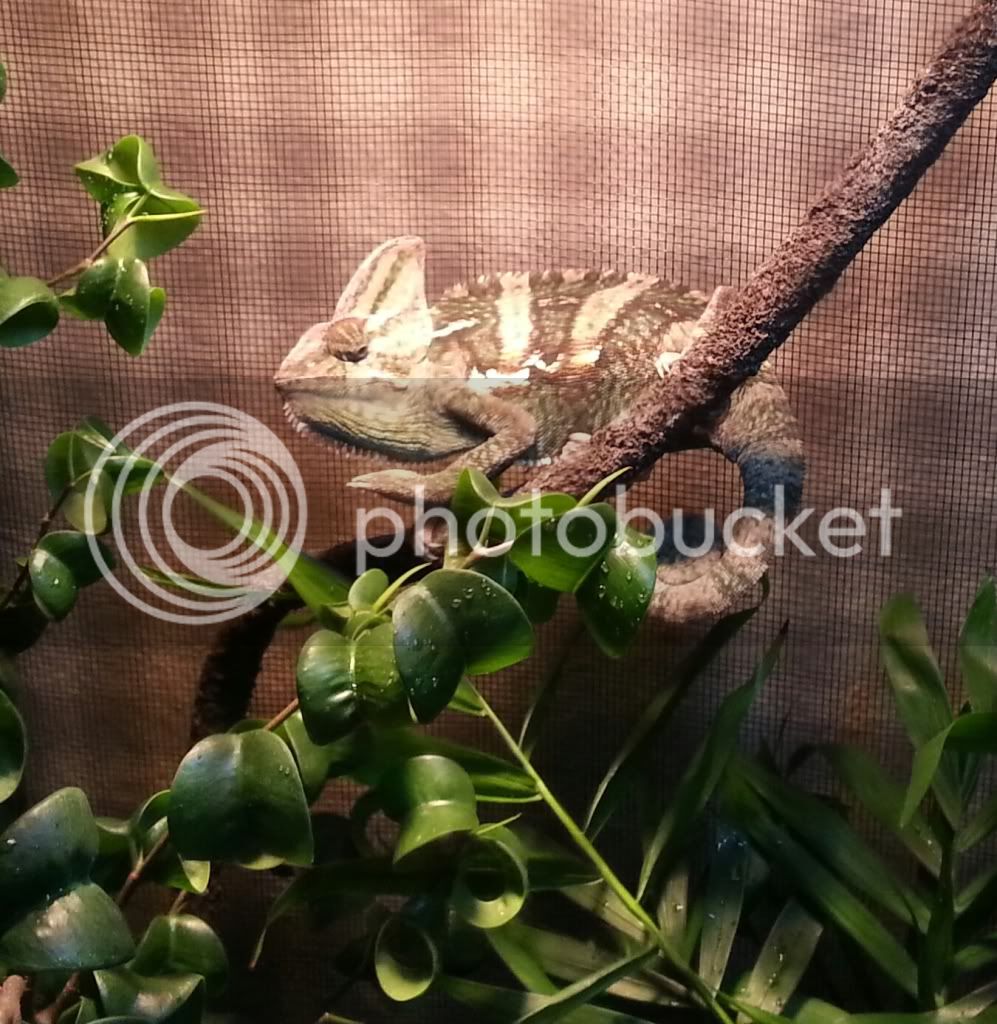 Welcome to the forums. This is a great place to learn about chameleons. Congrats on your new little man. He looks so sweet in the pictures. I'm so happy you got him and are planning to give him a kind and loving home. I have a few links for you so you can do even more research.
https://www.chameleonforums.com/blo...-keepers-young-veiled-panther-chameleons.html
https://www.chameleonforums.com/care/chameleons/

glad you were able to take Pip (is that like from the Pip & Flinx stories?)
and are going to give him a better home.

It's so good to hear stories like yours. Thank you for giving this chameleon a second chance, and welcome to the forums!

That's so wonderful that you've taken him from such a terrible situation and are going to give him lots of love and affection!!! He deserves it, and you are a wonderful person for doing it. Welcome to the forums and good luck!

Welcome I am glad you took him, he looks so sweet, he may have hissed at them, but he knows good people when he sees them Jann gave you excellent links to read up on

Thank all of you so much for the supportive messages. I am excited to learn all that I can and over time be able to say that I am the owner of a completely healthy and happy chameleon.

What a great story! He looks like a sweetie- so glad he has a wonderful new home.

He's adorable. His colors are gorgeous. Good for you and best wishes. :-D
You must log in or register to reply here.

If I would just had one more enclosure setup
2

Hemipene out while on my hand!?