Here's a new picture of Kitty,he's 27 weeks old today.
He stretched out for the pic so you can't see how fat he is!

Looks super healthy to me Brad … nice beefy legs, fat tail base, great color/skin, big bulgy eyes, and a tall straight casque. Now I am totally not saying this is a problem but more of a comparison to my guy … the casgue looks great but not very full compared to my guy – but that may be all the horn/silk worms he eats. To me, and strictly an opinion, the casque is like a reservoir for extra fat/moisture for when it’s needed – like a low bug population and/or a dry season. So it’s an area of the body that can fluctuate and in your case may just mean you are feeding him just right and in my case I may be over feeding him. Just my thoughts but either way I think you are doing a great job.

Kitty is looking great, Brad. You inspired me to try and get a picture of my young male veiled, but he really wouldn't cooperate. He has a striking resemblence to Kitty, though.. you would think they are clutch mates!

BTW.. after lots of indecision, I decided to name the veileds after noteworthy American political figures. With that in mind, this little fellow's name is Bill, because he is already posing for the ladies. I am venturing a guess that this guy is only about 4.5 months old, a couple months younger than pretty Kitty.

Anyhow, after much effort.. I pulled him out of his cage and put him on the ladder. That didn't work. I finally gave up after this shot because I am pretty sure that he was feeling just a little stress: 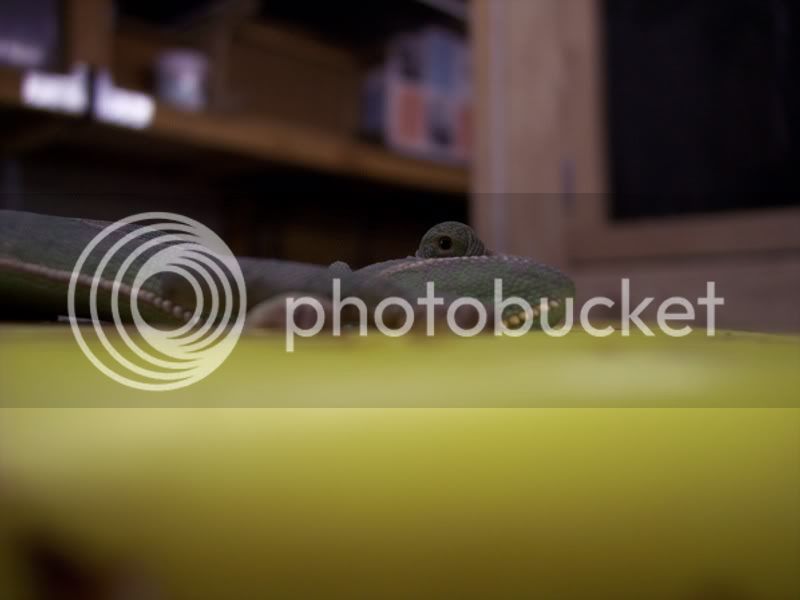 Can you say flat chameleon? He really didn't want his picture taken today.

Heika:
That picture is hilarious!

Roo:
I don't think any water or fat can catch up to his casque.
I swear it's bigger every day.
I don't think I can make him fatter, his budha belly already
hangs over his basking branch.

I had to add this picture (just taken this morning).
I love when he sits with his front hands crossed

I think this is a cool pictures of King Tut when he was younger.

Brad Ramsey said:
I had to add this picture (just taken this morning).
I love when he sits with his front hands crossed

Awww how beautiful is he? Simply gorgeous

Awesome! I think he looks perfect! He's a lucky cham to be sure. Great job with him.

Brad Ramsey said:
I had to add this picture (just taken this morning).
I love when he sits with his front hands crossed

Wow that is a nice picture. He is really nice. Looks like a model..lol..such a perfect shot. Kitty has awsome colors.
You must log in or register to reply here.

Pictures of large enclosures for inspiration 💞💜