New pics of Zelig from today!
He's my little Nosy Faly, he's around 4 months old now (never did remember to get an exact birthday from Chameleon Nation)
Zelig is a son of Raiden & Nala, & a grandson of both Screameleons' Wylde & Slash. 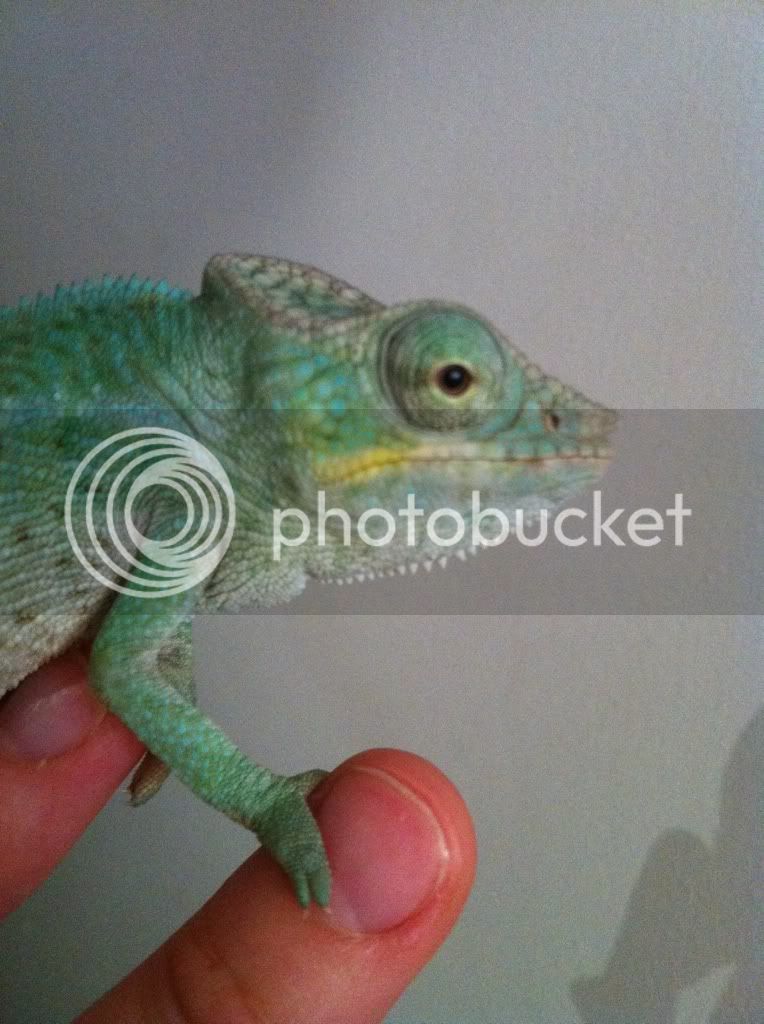 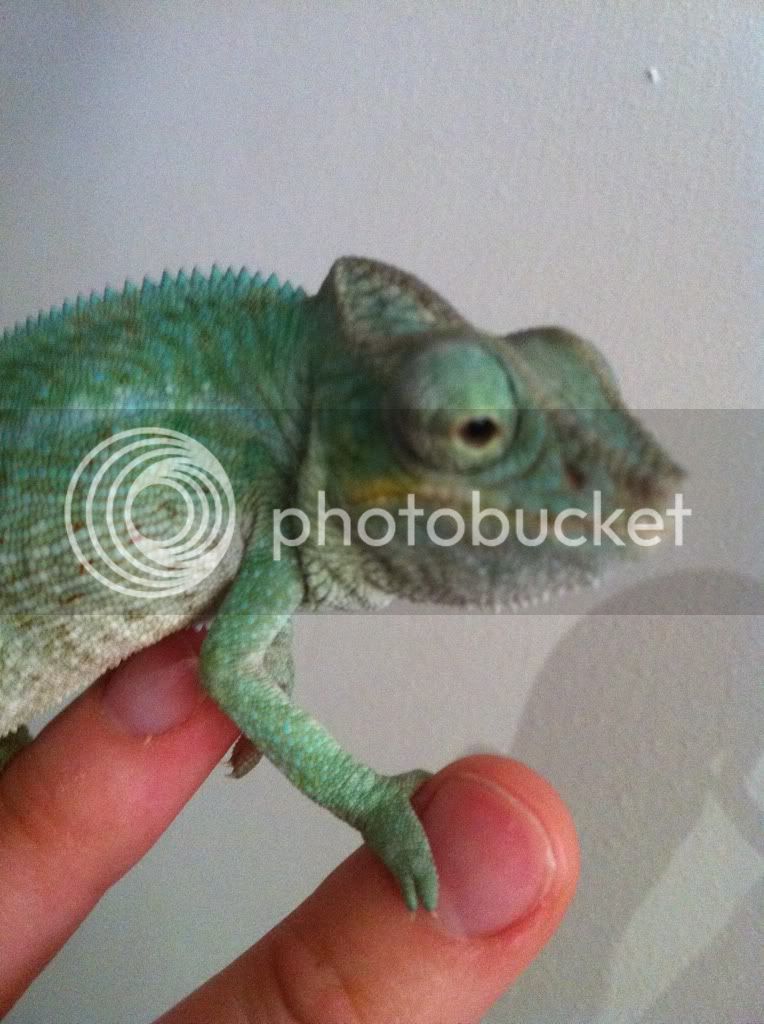 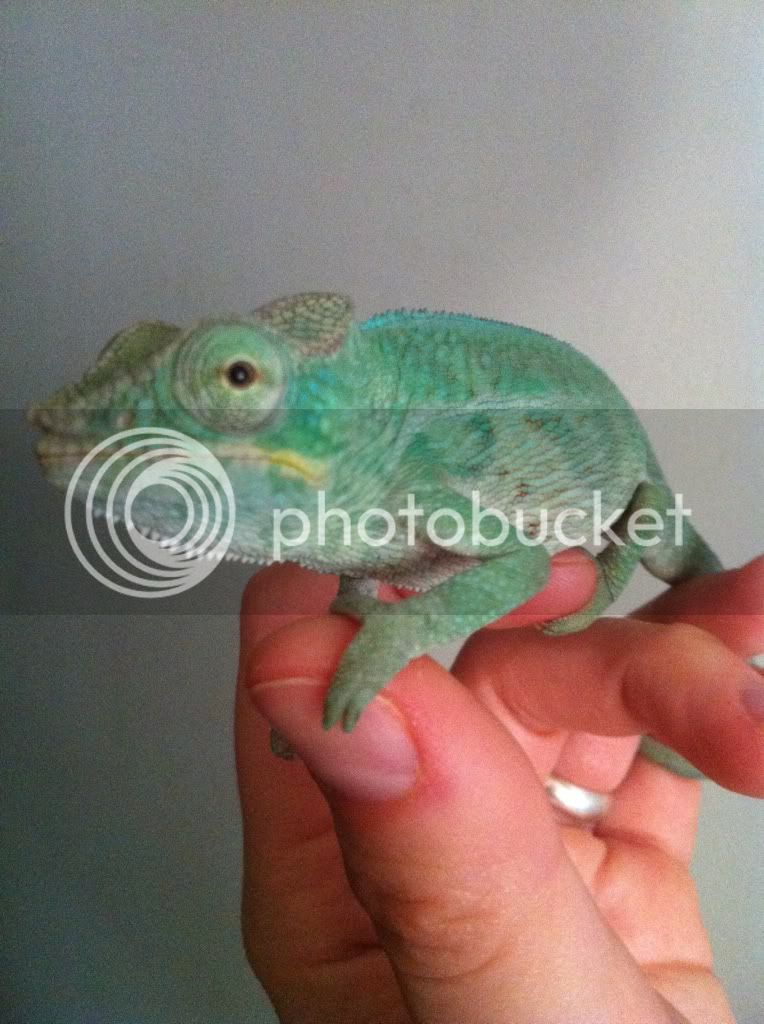 This next one looks really yellow, sort of reminded menof Olympia's Cobalt for a split second! Lol 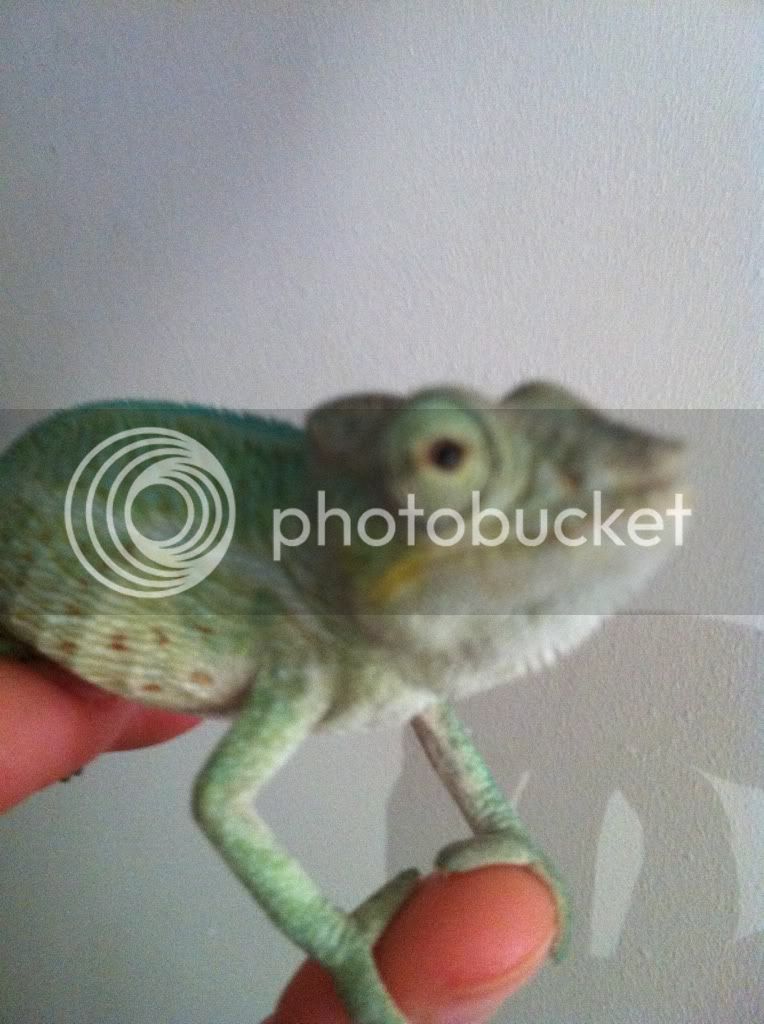 And here's a few looking really blue in the cage, before and after the other ones: 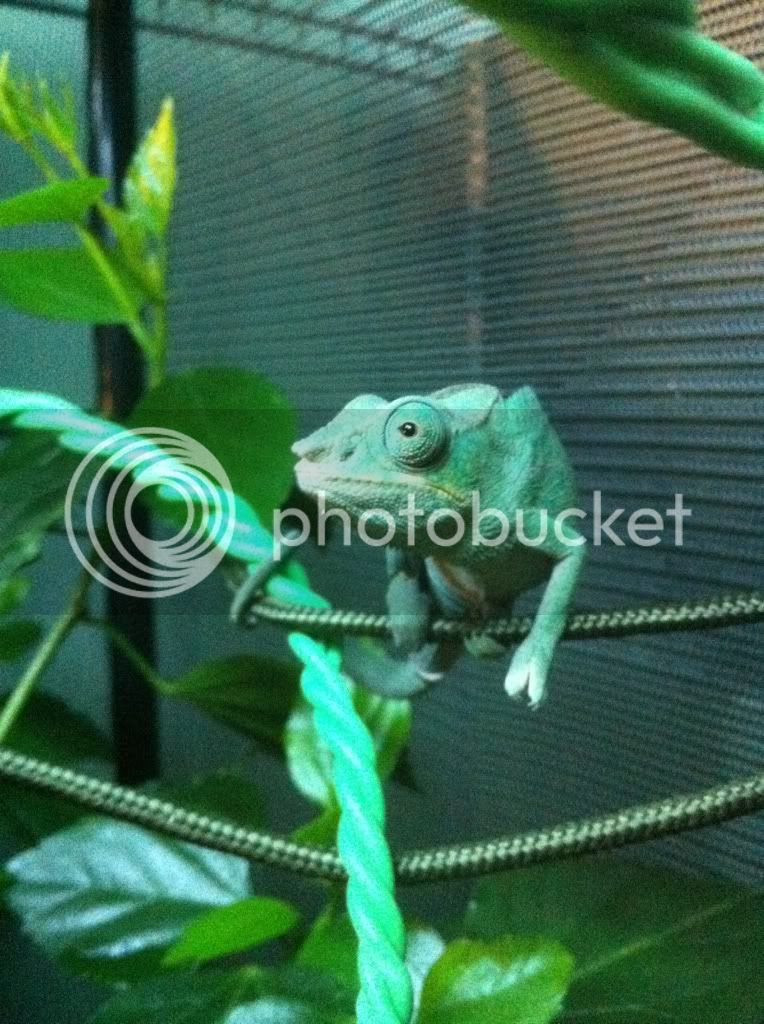 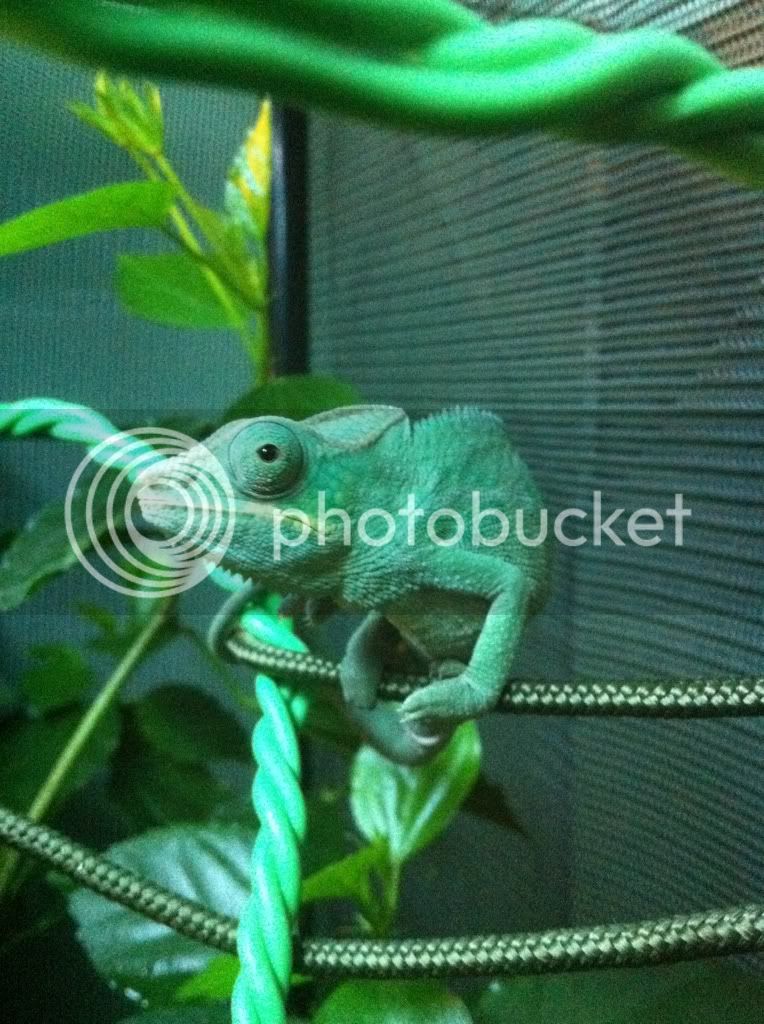 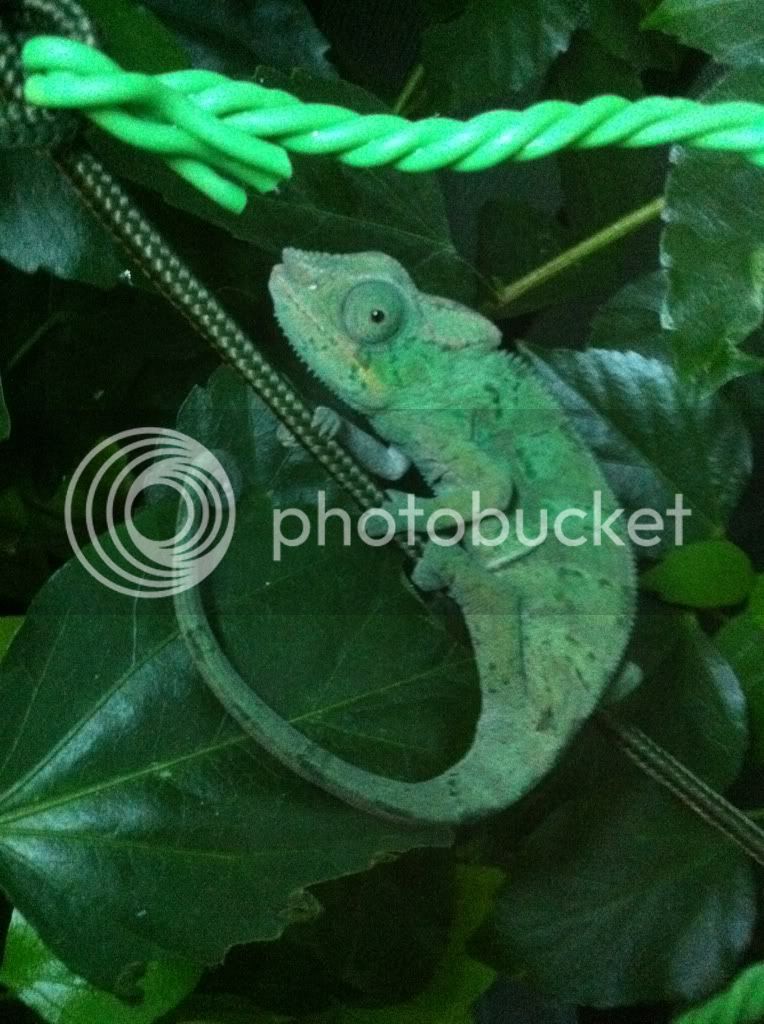 What do you guys think?

I think he's very handsome.. and I love his "lellow yips"

I forgot to mention, I was just in shock this morning about how big he's actually gotten. Lol. He crawled out from under some leaves after I misted, and I was just like WHOAH... Is that really how big he is now???
S

He so Purdy!!! It really is amazing how fast the grow at that age. He is looking good! I love the subtle colors he has in that last picture. Hes gonna be a looker for sure when he grows up.

Scott85 said:
He so Purdy!!! It really is amazing how fast the grow at that age. He is looking good! I love the subtle colors he has in that last picture. Hes gonna be a looker for sure when he grows up.
Click to expand...

Yay! I'm so glad you like him, Scott. He really is so cool. I'm incredibly happy.
I know, about the amazing, and I knew he was growing, but you know when you see something every day you don't notice small changes then it just hits you? Lol. That was me this morning.
That last picture didn't even come out that good. In person, his stripes were a nicer, kinda brightish lime green colour almost. Really neat.
He's a looker already, I'd be happy even if he stayed like this forever, but I'm also dying to know how he's gonna end up. I think it's gonna be pretty crazy! Lol

My Raiden offspring just arrived today! Been waiting over a year on this import. I cant wait to actually see them. I got them at work and I cant take them home til lunch. The waiting is killing me!

Your boy looks really good. Honestly, I have seen alot of Raidens' offspring in the last yr. I havent seen any that I wouldnt be proud to call my own. He really produces some outstanding falys. Good luck with him. And keep us updated with pics on how he colors up.

I saw the pics of your mitsio also. He's going to be outstanding as an adult. His bars match my males almost identically. I have a ch male from wc parents. Ive got pics of him on the forum. If you search you will find them.

Ahh, finally got them did ya? Yay. Well I look forward to seeing your new arrivals also - soon!
How old are they then, if you've been waiting a year?
I know, now I want to go and look at all the other Raiden boys, and compare. Lol.
I'd love to find someone who got boys from the same clutch and follow them along...
I love both of my guys so much. I cringed spending the money, but i wanted to go with colours I really loved. I figure if in the future I do decide i want to try breeding, which I have a feeling I might, I wanted to have something really spectacular to start a line with. At first i started out looking at ambilobes, but the only one that was blue bar with enough yellow to satisfy me, only had crosses. I wanted the blue, but I also really wanted yellow. Lol. So I said, screw it, I'm getting me a faly for the blue and a mitsio for the yellow! Haha.
It worked. They're both just wonderful, and im sure either of them would make amazing babies if I decide to do that. I almost got an unrelated female faly, but I chickened out at the last minute. I'm already such a paranoid mom as it is with the boys, I just freaked at the thought of worrying about gravid stuff too until I'm sure these guys are all healthy and happy and settled in their new home. I think we're getting there.
I can't believe they've been here a month already!
but then at the same time, I also can't believe I used to not have chameleons to look at every day!

Also forgot to add - weighed Zelig today and the scale says 19.6. That about right??

Echoezra said:
Also forgot to add - weighed Zelig today and the scale says 19.6. That about right??
Click to expand...

Sounds good too me. I almost pulled the trigger and got a mufasa/lexus female to breed with my male mitsio. I had to wait. I just got two wc faly females in Jan and a male from Chams Northwest last week. So I had to hold off. Besides I already had a gf for him but I really wanted some GT3 blood in my line. He was soo friggin cool. I love my falys but the mitsios are so baaad. They are my favorite locale i think. I wish it was a little easier to find them though.

I know. I feel the same way. I love the blue, but man when that yellow peeks through, it just brightens my soul.
Even on Zelig, my favorite thing is those yellow lips. When I saw that coming through a couple weeks back, I was ecstatic!!!

Peeked in this morning to find a flaky face. Lol. Told you he was growing!
So I guess I'll need a new set of pictures soon to show off his fresh new skin!

Seriously though check out my crappy pics of my new male Razr. They listed as Raiden falys in gen photo section. The quality sucks but Im going to shoot some better pics today or this weekend.
You must log in or register to reply here.