Hello I'm Pam I'm new here and to Chameleons. I did have one over 10 yrs ago but I made plenty of mistakes. This little guy was bought at a chain store on black Friday by my boyfriend pretty much on a whim! I did tons of research and hope I'm doing everything correctly. I own a lot of reptiles but no Chameleons well until now. He is in a reptile room that is a constant 70 degrees. He has a Zoo Med 5.0 flour. and a 40 watt Zoo Med day bulb for basking. He gets no additional heating at night. I drip and spray his enclosure 2x a day. He eats crickets and Dubai roaches daily and gets wax and meal worms as a treat. I have a question on the meal worms.... I have my own breeding colony and only give him freshly molted worms can he have more because of this? He gets plain calcium at every feeding and has had Herptivite and calcium w/D3 twice since Nov. 26th. I would really appreciate any comments on him or his enclosure. I did notice his veil is not perfect it has gotten much better since I've had him and seems to be straightening out or losing that crease that was in it. Does he look healthy? Again any feedback is really appreciated and needed!
His pics...... 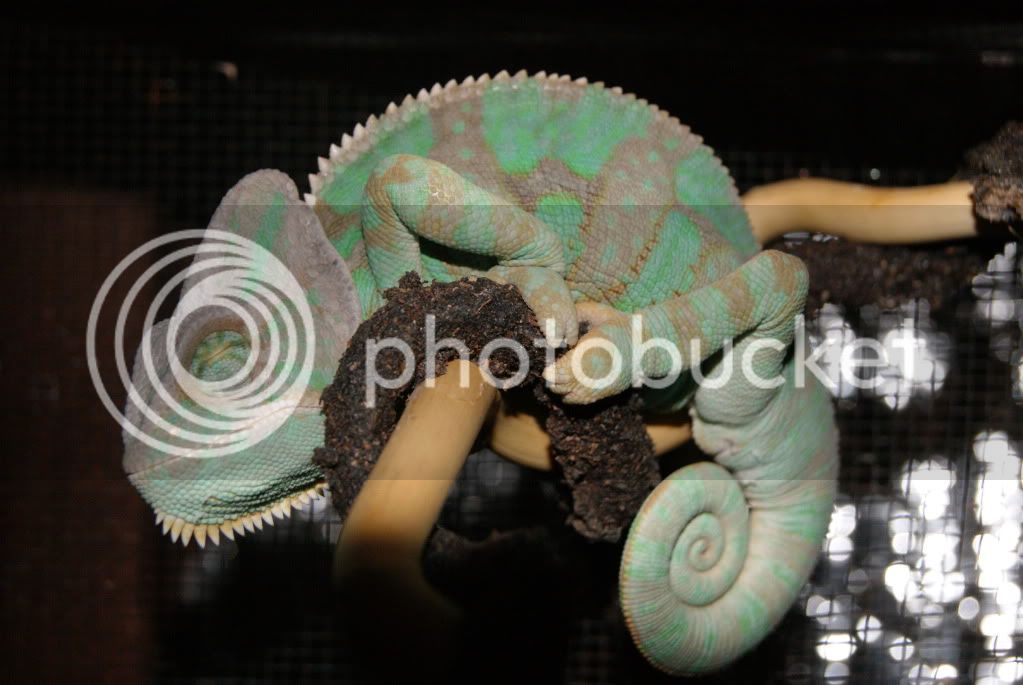 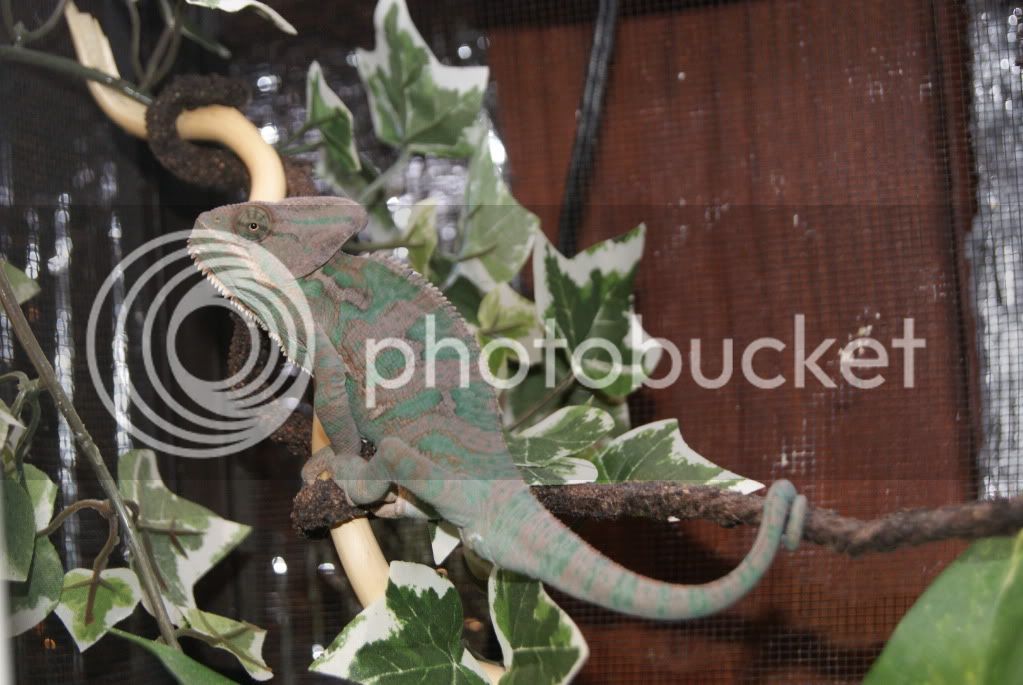 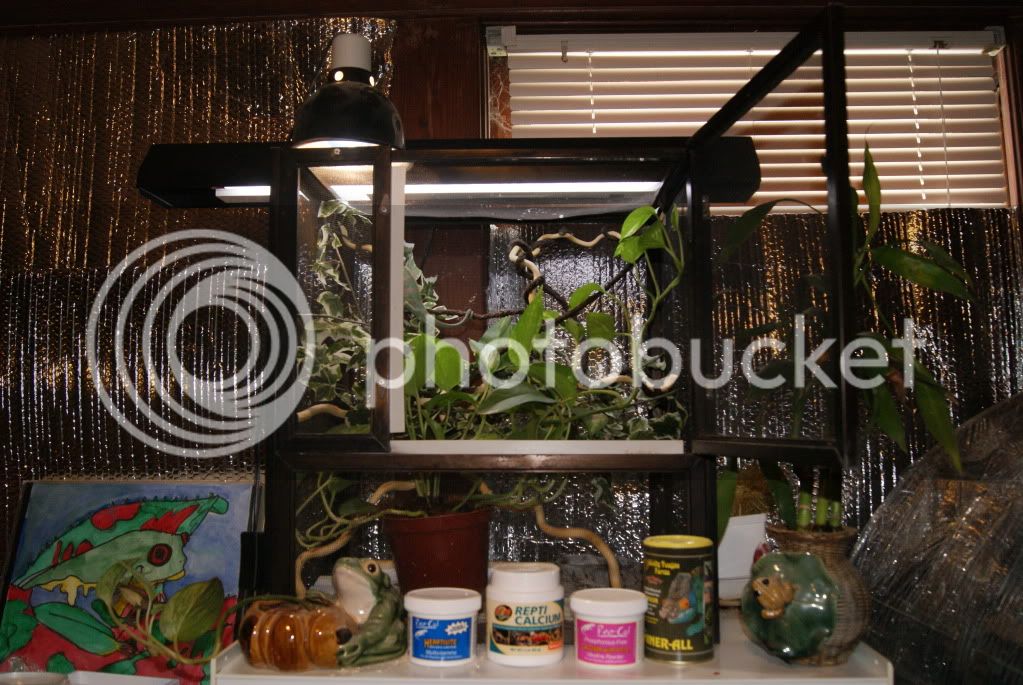 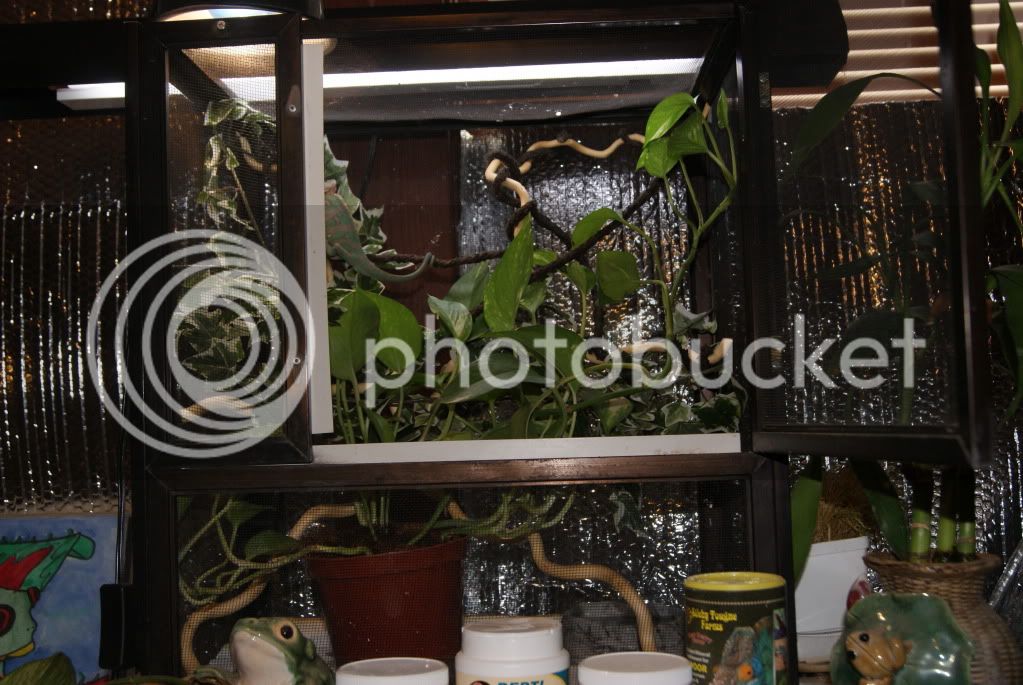 Overall your enclosure looks good! I would add a bit more horizontal perches in your enclosure though. Also, you will probably have to move him into a larger screen cage in like a month or so. Personally, I would stay away from mealworms because they have almost no nutritional value. Try feeding more nutritious feeders as treats like silkworms, butterworms, hornworms, etc. Crickets and roaches you are feeding are great staples.

What is your basking temp?

Is that a water bowl i see in the corner?

Thanks! His basking temp is 80 degrees, he gets plain calcium everyday and has had both Herptivite and calcium with D3 twice since Nov. 26th. That is a water bowl I use it to catch excess water of the dripper if I don't drip into the plant.

GeckosbyPam said:
Thanks! His basking temp is 80 degrees, he gets plain calcium everyday and has had both Herptivite and calcium with D3 twice since Nov. 26th. That is a water bowl I use it to catch excess water of the dripper if I don't drip into the plant.
Click to expand...

80 seems a bit on the low side. I would say ideal temps are 83-85 degrees. You can adjust this by raising his basking perch closer to the bulb.

Anyway everything else in your husbandry seems correct and I commend you for doing your research.
G

Thanks again! I will go move some stuff around to get that area to the correct temps. -Pam

Eh, I don't like the term staple. Mealworms are fine as treats, but they shouldn't be fed too often. I use them about twice a month. Variety is important, so keep up on that. I also wouldn't feed waxworms too often as they are fatty and addicting. Healtheir worms would include superworms, silkworms, hornworms, butterworms, etc. Other prey could include stick bugs, moths, butterflies, houseflies, blue bottle flies, snails, crickets, different species of roaches, some spiders, grasshoppers, etc.

It is important that you research the feeders because some should not be fed wild caught, some build up stuff in heir systems, some are more likely to carry parasites, etc.

Edit: I wouldn't move his basking spot closer to the bulb, he already looks pretty close. You don't want him to burn himself. I would suggest a higher wattage incandescent light and then raise the bulb off the screen so he can't burn himself.
G

I also have a colony of stick insects I believe they are the Indian sticks. I will get a pick up soon to make sure but would these be OK? I just started a colony of Super worms because the ones for sale seem to big for him or can he eat bigger ones? I will also order some different worms at the next show its really cold here in New York and couldn't imagine anything living through shipping right now.
You must log in or register to reply here.