Well, we finally finished remodeling the rickety old cage that I bought on Tuesday. I'm really happy with how it turned out!! My boyfriend worked day and night on this thing until it was finished...it went from being MY project to his...which I think is so cute, considering about 6 months ago he was totally creeped out by the idea of a chameleon living here. He said he would never touch it, he didn't want it to crawl on him, he hates crickets, etc.etc.etc... NOW, it's a totally different story! He loves this little guy just as much as I do...he holds him, he lets him crawl on him, he spends hours on end re-building this cage, he hand-feeds him crickets...it's just so neat how these little creatures can make their way into any heart! Anyways...here are some before and after pictures! 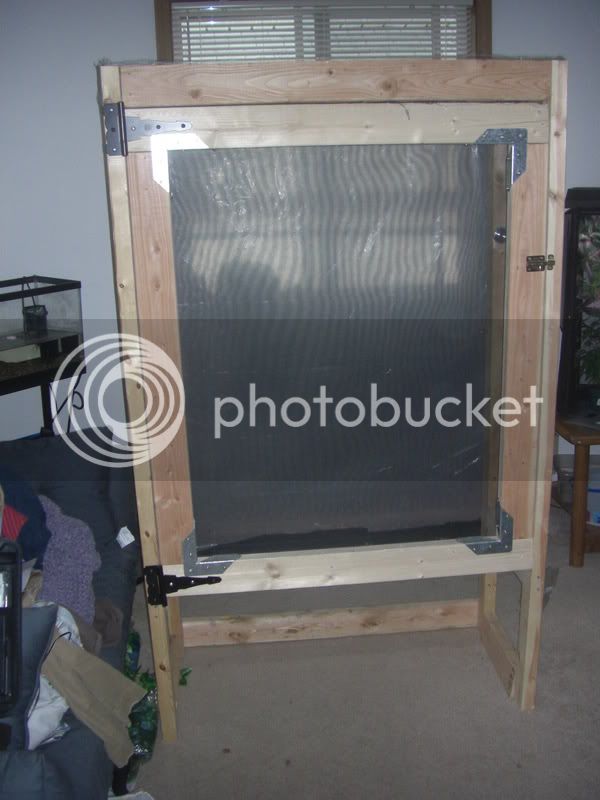 This is the basic cage before we started re-doing it. The guy said he built it in about 6 hours, so it was pretty wobbly and unstable. Also, the door was too heavy and would tip the cage over when it was opened. It has the same base dimensions as that of a 40 gallon breeder, and the previous owner had built this cage around one. It sat under the screened in part, and contained cyprus mulch, a water dish, and some live plants. It was kinda dirty looking and Im not sure if the mulch was ever changed...I took that out right away...I'll save that tank for a different reptile! 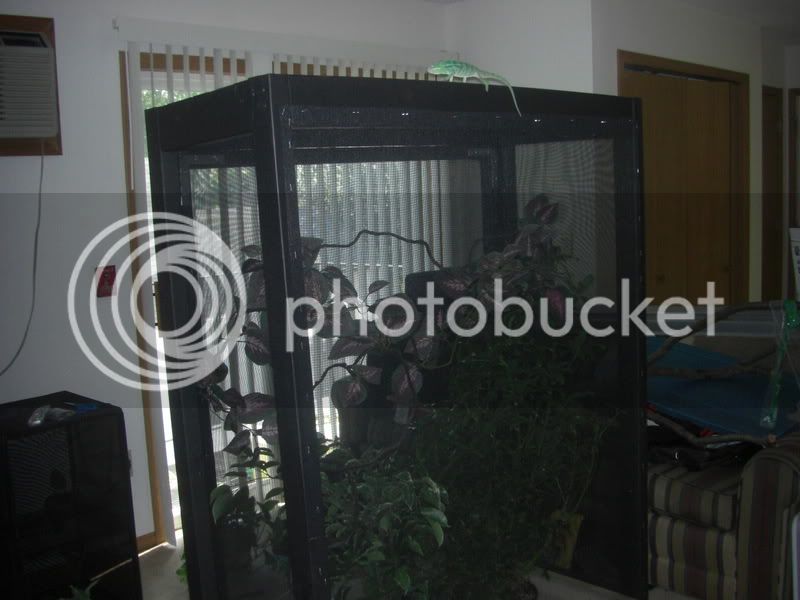 Here is the finished project as I was decorating the inside. Apparently, Elmer didn't think it was big enough...he climbed around on the top the whole time! 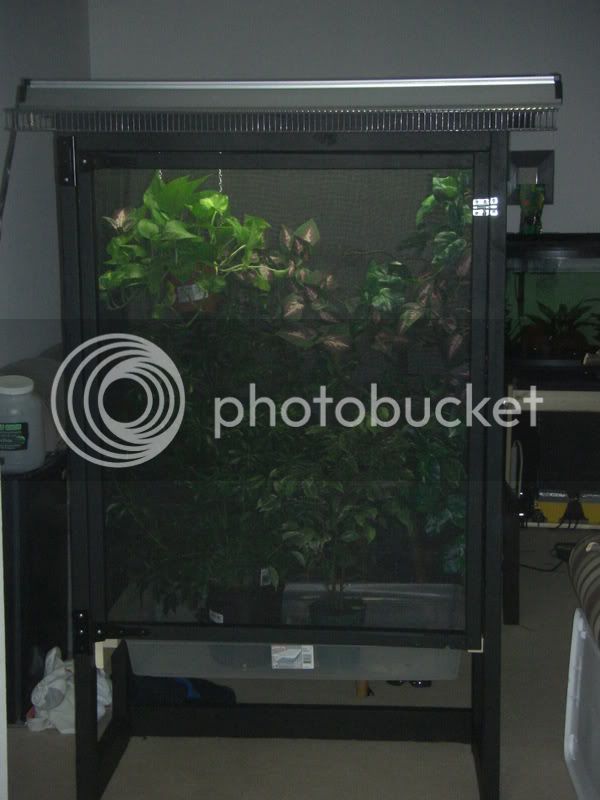 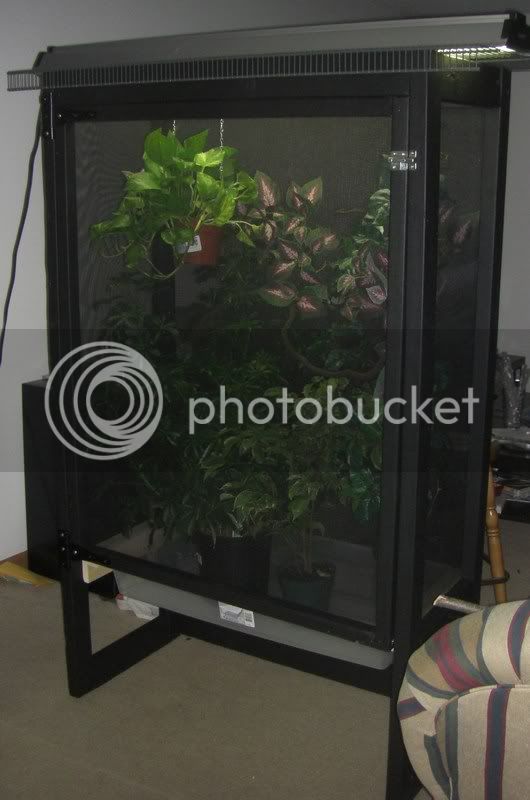 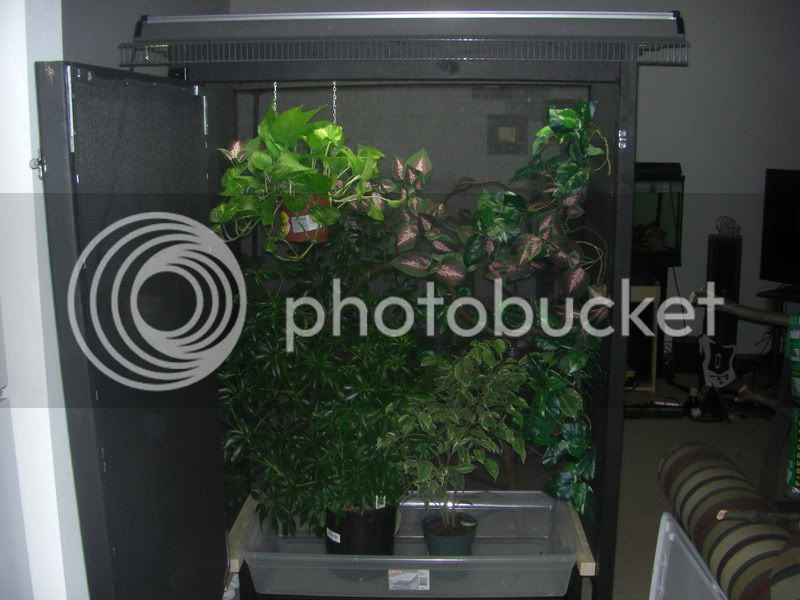 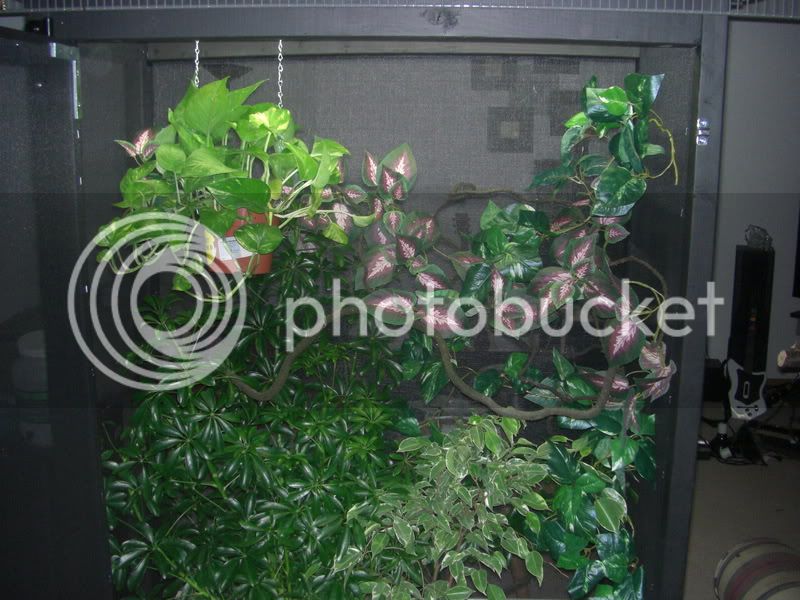 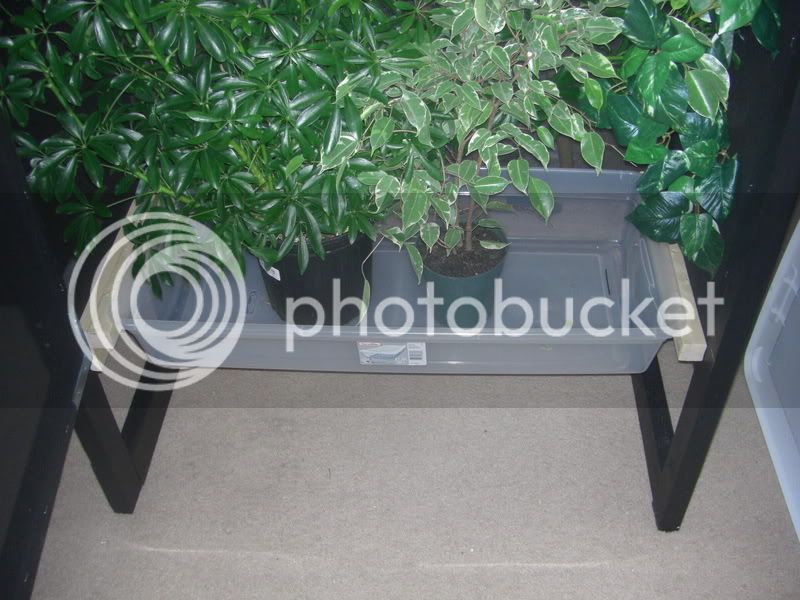 Here is a picture of the bottom. Im planning on drilling a hole in the bottom of that rubbermaid tote, and sealing the sides with something to prevent water damage. 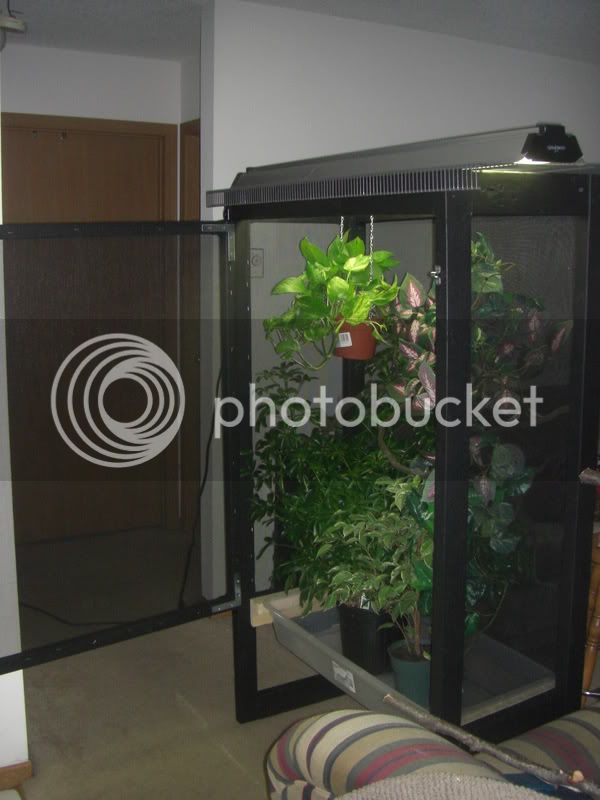 And here's one more picture of Elmer curling up for bed in his new big boy cage! 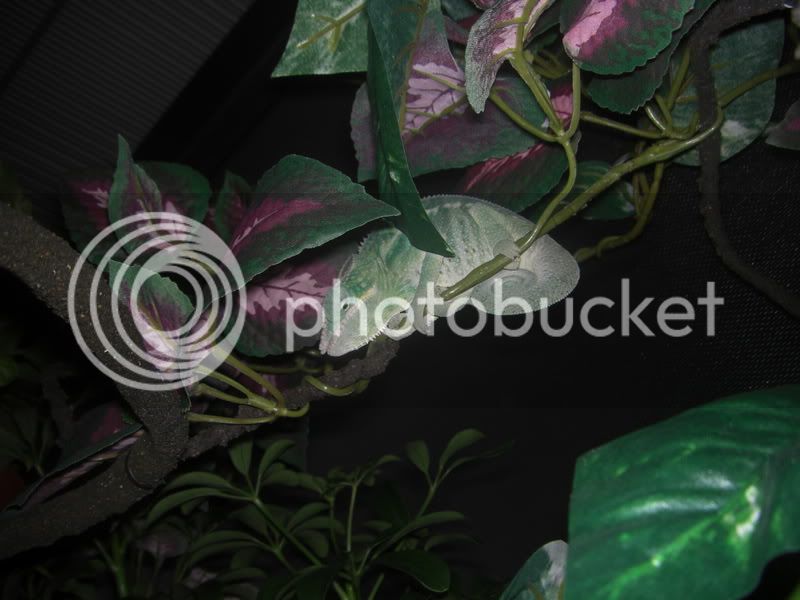 Nice cage! And a really good idea with that bottom of the cage.

I like your idea with the wire shelving top for the lights and such so it doesnt sit on the cage wire... the bottom is also a good call, I would put another board across the front and silicone the edges to "glue" the bin in place as well as seal it, looks very nice and black seems to work good for your cage and the room its in...

Very very nice! I like how nicely you have finished it...good job! Elmer will love that for sure!

Thanks guys! Yeah, I got the idea for the top from a friend who has a bearded dragon. Her dad made her a cage so she was having a hard time finding a top that fit it, so she used one of those. I figure it lets light in really well, I can hang my hanging pothos from it, the cham can climb on it if he wants, and i can clamp lights on it too.
D

I like it! I need to get a hanging pothos for Clyde. That UV light is gi-normous! Need to get one of those too, but then my cage isn't that long

nice new home for the Elmer!!

Dig it...totally sweet. Love the plants in there. What kind are they?

The tallest one on the left is a schefflera (umbrella plant) then there is a ficus on the right. The one that is hanging on the left is a pothos, and the rest are just artificial vines and foliage that I got from the pet store.

Great setup, i'm in the process atm..hope mine turns out as good!!!
S

Great cage and great cham! keep up the good work!

Wow! Elmer looks like a movie star in his new Hollywood mansion And.............your boyfriend is a definite "keeper"!

Very nice setup!! Well thought!! Quick questions (as I am going to build my own as well):

Hey thanks for all the compliments! Elmer is loving his new home, he explores all day long. The screen material is just a fiberglass window screen that i got from Menards. This one, to be exact http://hardware.hardwarestore.com/72-156-window-screen-fiberglass/firberglass-screening-653092.aspx

Thanks for the reply. I just came from Home Depot and noticed that they also have this PetScreen version. Seemed thicker...

Any comments on the difference(s) between these two types?
D

I actually bought and use the Petscreen stuff. Works really well. I was concerned about not being able to see Clyde through it, but its no problem whatsoever. The only issue I had is when I put it on the enclosure. Make sure you pull TIGHT when you staple it down. It does have a tendency to stretch slightly. So if you plan on attaching vines to it, make sure its really secure.

I don't use it for the roof though. I was concerned about the material filtering out the UV. Plus since it does give a bit, I didn't want it to get slack or sag. I use a 1/8 mesh out of a different material.

I have been reading these threads here for the last 4 days!! And I still don't have a good answer on which screen to go with...

1) Aluminum/Metal: will wear off the toes

2) Fiberglass: crickets will chew through

4) Too big holes: crickets go through

I am dying to start building but this decision making is terrible!!!