Has anyone ever seen an Albino Cham? I know they all have a form of Pigment Manipulation to turn colors, but what if the pigment wasnt there? You see a lot of other Reptiles that are Albino, but I havent seen any chams. Like the post say, I am just Curious.

I have wanted to know for a long time but have still yet to see evidence that one exists. It can occur in any animal as far as I know. I would be very interesting to see what colors that they would show and if they would have the ability to change. One probably wouldn't survive in the wild so we won't see it until someone hatches one out. I'm sure that it would be worth a lot of money. I think that they would show different shades of yellow and their color changing ability probably wouldn't be as dramatic. I am very interested in seeing one and I have a feeling that it isn't too far off with the rate that they are being bred in captivity now. I did have one panther chameleon that hatched out white without the red eyes, but as he grew he gained a more normal coloration. He is still lighter than the others but he is only around 5 months old now. I'm excited to see how he turns out. I sold him to a close friend because I had to see what his adult coloration would be.

Staff member
I have never seen an albino chameleon either. I do recall some disturbing photos of veiled chameleons earlier this year. However, I don't think they would be considered albino.

Yes, there are albino chameleons. I don't have the photo's but I believe Chris Anderson does? They are rare, I don't know if any are alive in captivity or not. Personally, I'm ok with that. I don't ever want to see designer chameleons on the market.

I personally have an r.brev that is of questionable pigment. Not an albino, but possibly a luecistic or hypomelanistic. It does not have the ablity to change color either.

That is sad. But it is interesting. What was the outcome of that little guy. Did he/she live or were there other problems? I would also hate to see "Designer" chams too. I was just curious about it with the way Chams change colors. That Brev. is pretty. Thanks for the post.

I'm not quite sure if anybody's seen this pic, but I googled "Albino chameleons" and look what came up: -->

I had more problems with the people hating on the breeder for trying to sell the "translucent" Veiled for $4000 USD. As if $4000 was too much for this rarity- no matter how "wrong" it was to be created- though I am unsure of the details to how they came about.

Personally, I will only sell a chameleon for as much, or as little as I am willing to part with it for. Not the market value- though we all have certain important responsibilities when selling below the MV, I feel that unless you are one of the larger companies, "worth" is a price tag that will fulfill the loss of the animal you are selling.


What was the outcome of those Translucent Veileds anyway?

MicheleSmith said:
I'm not quite sure if anybody's seen this pic, but I googled "Albino chameleons" and look what came up: -->
Click to expand...

LOL- are you talking about the Brev or that Jax?

MicheleSmith said:
LOL- are you talking about the Brev or that Jax?
Click to expand...

The Jax. Haha! That brev looks like it doesn't have pigment at all. Pretty interesting.
Last edited: Jul 12, 2006
M

Jerm said:
The Jax. Haha! That brev looks like it doesn't have pigment at all. Pretty interesting.
Click to expand...

Oh...right. You even quoted me and I missed it LOL.

Staff member
The jax is actually albino to the best of my knowledge but I don't know how accurate that determination really was. Its a very old pic and has long been dead, however. There was also talk of an albino melleri but no photos were ever produced of this animal. As for the translucent veileds, I know some went to England but I'm not sure about the rest. My problem with them is they are being marketed like a new money making morph which I think is a huge problem considering the complexities these specimens will present regarding their UVB requirements and lack of pigmentation to protect themselves from it. I think the seller's motives were highly questionable and while I don't condone irradicating the genes, I think they should be bred on a limited controlled basis until the difficulties with UVB are fully understood and seen.

That jax just looks like a really six red phase female to me...

There is definately a genetic issue going on with the Jax. Even if it isn't true albino, it is at least hypo.

Here is another pic of my pigment impaired brev. Chris, one of these days I'm going to have to bring her up to Ithaca for you guys to check out and give me your opinion. 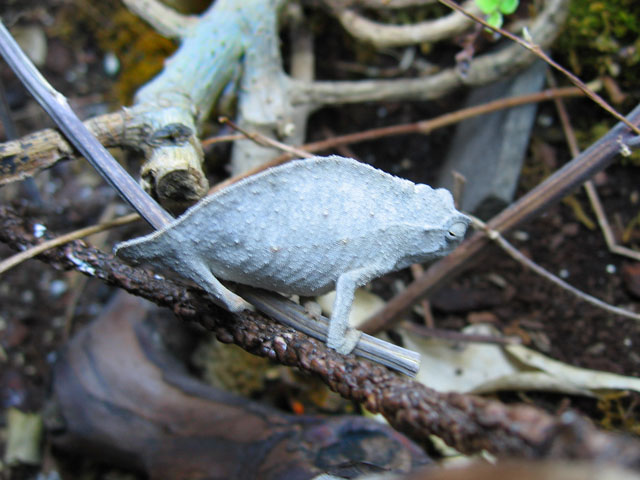 Just wanted to let you know that these chameleons have resurfaced, bought by Holland at Colour Creations from the opriginal French breeder and are now in the US for resale.

should Cache the page/photos for reference.

I couldnt get through the link. The page said expired.

The add has been moved. If you go into kingsnake classifieds you will see it.
I also wanted to add that I heard someone at the Daytona Show speak of an albino C. parsonii that they previously owned and have photos of. It didn't survive to adulthood though. I would love to see the photos, could you imagine the value of that today if it would have survived? I will see if I can get them to post here.
Last edited: Aug 22, 2006

Value isn't a linear scale. Something's only worth what someone's going to pay for it.

That's why I laugh at the ads for the ugly new veileds - they make it seem like a money making deal. If Holand can sell those for $5,000 a piece, then they were worth $5,000 a piece to the buyer.

Last April, I sold this male:

for a LOT of money.

I was not going to sell him. I was at a reptile show, using him for my demonstrations. One guy, who was well informed, wanted him. He didn't want the other veileds, he wanted HIM. I told him I wouldnt' sell him. I told him he could get an entire setup with a chameleon online for less than that. I thought about how I could reinvest the money in my deremensis and melleri, and I caved.

That guy was worth a lot.

Personally, I wouldn't pay for those translucent veileds. They're not worth as much as a nice veiled, not to me, anyway.

An albino parsonii? I think, the majority of chameleon owners would probably put its value BELOW that of a normal, healthy parsonii. Rarity isn't the sole factor in determining value. Although, since parsonii are not as big sun worshippers as veileds, skin problems might not be a problem at all in captivity.
Last edited by a moderator: Aug 3, 2016
S

Hello. I am new to this. I have just bought my self a Yemen and he sees a little different from other I have seen. I thought he was pied but have talk to some shops and they say to ask you guys cause I am living in the uk and our exeperts are not that good. My Yemen has or seems to be lacking in black pigment?? And has a lot of White on him. He is 9 months old and as every day goes by he gets I little more whiter! Does any one know what he could be? I will post some pics when I get chance! Thank you for your time.
You must log in or register to reply here.

Parsonii or Mellers Breeders in the UK