I've been debating whether or not to get a Jackson's chameleon and just had a few questions. Do jackson's get colorfull? I always see them green or brown. And also are they that much harder to take care of than a veiled?

Jacksonii Jacksonii ( Chamaeleo Trioceros jacksonii jacksonii)
female bears 3 horn just like male
Male is the most colorful of all 3 subspecies, with a yellow band run horizontally across the body, lots of blue and green

Jackson were listed as one of the starter Chameleon; BUT personally I would go with the Standard Jackson to start with.

Here is a link to FLChams, Mike have all 3 subspecies and picture of them to compare:
http://www.flchams.com/other_chameleons.asp
M

Mine are very colorful not like a Panther but still very nice to look at!
This is my site where I post pictures of my hobbies
http://markdeb100.googlepages.com/thelizardlounge
You will see how colorful they get The male is as always the more colorful of the pair. As far as husbandry I find them easier to care for then my vails as they require less heat. The trick is to keep them in a very low traffic area and no stress

Hey marksteeves i really like the way your chams look! what type of jackson's are they? I'm guessing dwarf cuz the female looks to have one horn.
M

Jacksonii Jacksonii as far as I know, I am new to the world of Jackson's and only bought them because they were suffering horribly at the pet shop we walked into. They were all black and in really rough shape. I run a cold air humidifier inside the enclosure and it sure made a difference.

ya i know how that feels. I work at petsmart and they have no idea how to take care of their adult male veiled. I want to buy it just to save it but i just don't have the money for it ($200 which is soo overpriced). its always dark and in a glass cage not too much bigger than itself. i would deffinitely get it if i could
M

They are all the same as far as chams go. Why not try to approach your supervisor and ask him if you can set up a display for the Chams. As a customer I always complain about the condition that lizards are kept in if I see something amiss. and more than once changes were made for the benefit of the animal.

mine turns a really light yellowish and a light teal on the tail but other then that he is just a light green or dark green with black. he's awesome

My jackson's have great personalities, always curious. When I clean they're enclosures they seem to need to see what is going on. Also like to be out whenever possible. Not the most colorful but stunning in they're own right. By the way they are xanthos. Hope this helps.
K

i just picked up a second male Jackson because he was housed in a small size retibreeze at a pet shop with another male and was solid black.. He hadn't been in there long thankfully. He's is doing a lot better now, in a solo enclosure about the size of a large retibreeze. I posted another thread not seeing this one.. sry..
On a side note, How long does it take for baby Jackson's to grow their horns to maturity?
Both of mine have pretty good sized horns, but i was told this one is a sub adult..

Benjlan said:
My jackson's have great personalities, always curious. When I clean they're enclosures they seem to need to see what is going on. Also like to be out whenever possible. Not the most colorful but stunning in they're own right. By the way they are xanthos. Hope this helps.
Click to expand...

Funny, I don't think of them as less colorful than any other species. They are their own beings with the color range that worked best for them in their habitat. A healthy cham's color just glows. Often you see this best when looking very close. Same with T. deremensis and K. fischeri. The range of color change isn't as broad but the intensity of every shade is wonderful, especially that yellow. Almost looks as if they have a lightbulb inside somewhere. T. deremensis often show pale cloudy patches rippling across their skin almost as thoughts flit through their minds and this can happen even without their stress spotting pattern. Their skin is so light sensitive that it can develop a "shadow" in a patch that happened to get shaded by a leaf. When the cham moves it disappears. I think of them as the cuttlefish of chams. I also kept F. verrucosus for years and though they are often described as "less colorful" than their panther relatives, when watching them fire up at close range they are stunning! All sorts of flecks of intense turquoise, metallic greens, and white.
Last edited: Apr 8, 2016

I have all three subspecies of Jackson's. Mt. Meru Dwarf Jackson's are my favorite. I have 15 merumontanus/Mt. Meru. Three months ago, I received a pair of the more rare jacksonii jacksonii. It has taken him quite awhile for the male to settle in and get his nice colors so I don't have any good full-body shots of him. His name is Stripe because of the trademark yellow stripe down his flanks. I also have a one year old xantholophus; the most common subspecies of Jackson's here in the US. Here are some pics of my cham fam. 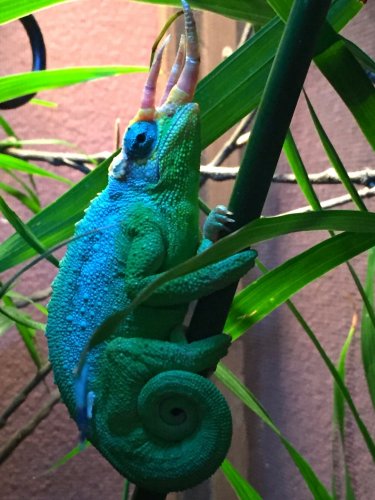 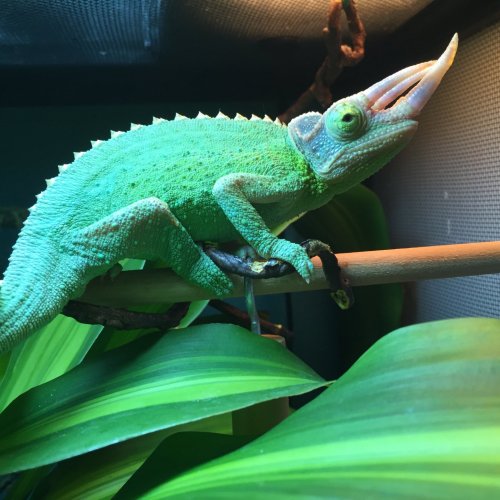 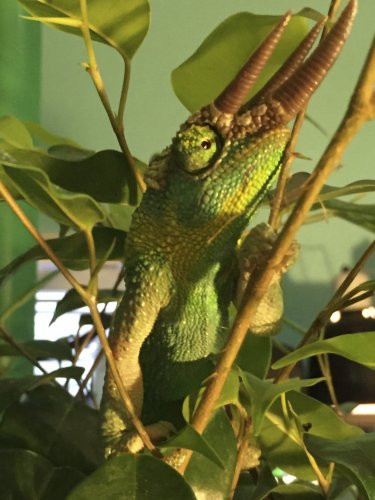 Is my Jacksons Chameleon pregnant??

I
Looking for reference of Jackson's Chameleons different colors