I got some vines from the ivy plant on our garden fence, which I scrubbed with bleach, baked, scrubbed bark off, bleached again and baked till dry to put in enclosure to create connecting 'highways' between the bigger branches.

I've noticed, when I'm near the enclosure, there is a faint smell of the vines.
I'm not sure if this is harmful to chameleons or not?

Should I take the vines out?? My Dad has honeysuckle in his back garden so could replace them with that??
M

Well, I have removed the vines, but it was coz they ended up being in the way.....

....I found a schefflera arboricola!!!

When I was setting up the enclosure, all I could get was ficus. I rang 5 garden centres who didn't have any scheffleras in, then the 6th one I ended up in, Dobbies, only had ficus, so that's what I got.

Anyway, I was in Wilkinsons today (which is a chain of shops which sell basically anything and everything for those of you not in the UK ) picking up some plastic containers to put the feeders in, then on the way to the till, I spot these plants.....and there on the bottom shelf with a little 'hand' of leaves poking out, was a little schefflera arboricola, just the right size for the front of Simba's enclosure.

I'm over the moon! In it went after being washed and pebbles put on the soil and I had to remove the vines I'd put in to get the plant in, which has created a go between for the bigger branches anyway. Yey!

Funny that I got the plant in that store but couldn't get one in 6 garden centres!!!!

Will post a lil pic when hubby gets home with camera. (He's restoring our 1966 VW Campervan so keeps pinching my camera!!! )

I was at the nursery yesterday and someone told me that some ivy vines are toxic. Just FYI

DeviousMike said:
I was at the nursery yesterday and someone told me that some ivy vines are toxic. Just FYI
Click to expand...

Thanks for the heads up. Good job I took them out!

My loveley lil schefflera is at the front. More cover and opportunites to drink....all good 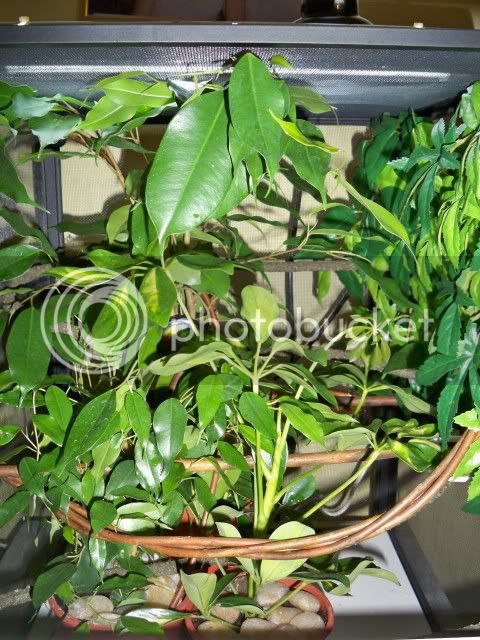 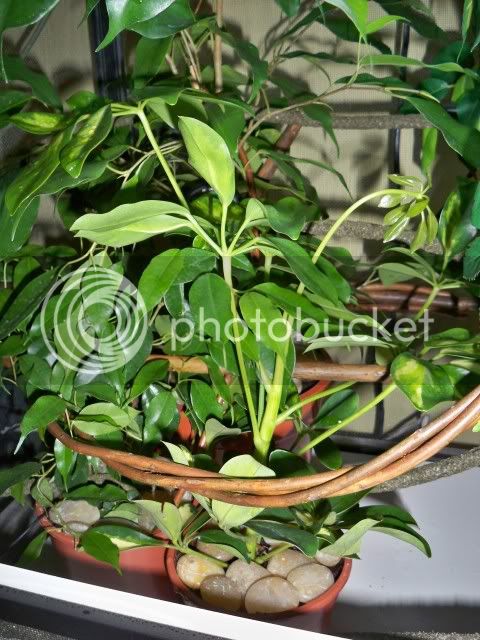 Sorry to be the bearer of bad news; looks like you got the dangerous Schefflera, S. actinophylla.

Edit: My apologies; I was looking at it on my stupid iPhone. The ficus leaves fooled me. Looks like the others correctly indicated it is the right one, S. arboricola.
Sorry.
Last edited: Feb 21, 2011

DGray said:
Sorry to be the bearer of bad news; looks like you got the dangerous Schefflera, S. actinophylla.
Click to expand...

It said Schefflera arboricola on the little plant card?????

I've also just had a look on the live plant database and my plant looks exactly like the arboricola. (In the pic there are ficus leaves in and around the schefflera. Could this be making it look like the other one??)

It's a Schefflera Arboricola variagated:

It looks like the right kind to me.
You must log in or register to reply here.