* Your Chameleon - Panther (Male? Still not sure), about 4 months old, had him since October.
* Handling - Once a week, perhaps
* Feeding - feeding crickets, I let him have as many as he wants in the morning, usually 5-10, depending on size
* Supplements - I've been going back and forth between a multivitamin and cal w/ D3 every feeding. I just found out that this is WAY off. I ordered a cal supplement w/o D3 last night. From now on I'll be using cal w/o D3 most feedings, multivitamin and cal w/ 3 only twice a month.
* Watering - I have a dripper going, and I hand mist 2-3 times pretty heavily. I see him drink at least once a day.
* Fecal Description - Brown with white urate. Hasn't been tested for parasites.
* History - He came from LLL reptile, haven't had any problems with him, though he seems small for his age. He has grown quite a bit though. I ordered some small hornworms and butterworms, I know crickets shouldn't be his only food source. He won't eat dubia - I've tried several times.

Problem: Two days ago I fed him his crickets in his cup, and watched him eat the first couple. I left the room, came back 20 minutes later, and there was his dinner, back in his food dish. I know reptiles aren't supposed to be able to throw up their meals, but It was not poop (I could make out cricket legs and heads, not digested). It looked like he'd thrown it all up. It was all gooey and nasty, coated in a clear slime. It scared me, I thought he'd torn his tongue out. But later (next day) I heard his tongue hit the bowl, even though there were no crickets in there. Today he hasn't touched his crickets, or not that I have seen. He's not even near his bowl. I'd assumed that he'd just eaten too much and or a cricket too large and it'd just come back up, but now that he's still not eating (to my knowledge) two days later, I'm really worried about him.

Is he small for his age? I bought him from LLLreptile on Oct. 10. They told me he was about a month old. He's probably doubled in size. He just seems so little. 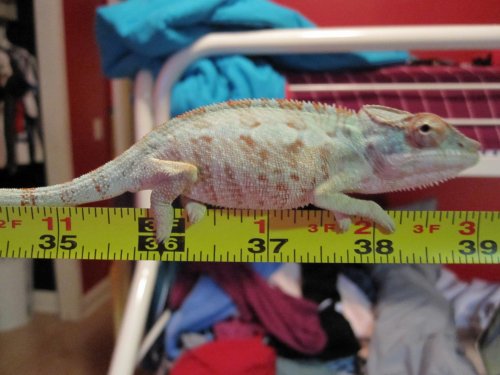 I too purchased a panther from LLL was he is also still very little. My little guy is still very skinny for his age but I'm working on fattening him up. Let's talk about your guy...

What size crickets are you feeding him? The size of the cricket needs to be no bigger than the width of his head. There could be many reasons why he threw up dinner and stopped eating. Keep a very VERY VERY close eye on him.

Is he drinking? Is he moving his back legs ok? It could be if he was fed a cricket too large that he could have an impaction. My veiled did the same thing when he had an impaction, threw up, then lost mobility of his back legs.

If he doesn't improve very soon I would prepare to take him to the vet.

Also, vitamin without d3 every other feeding. Vitamin with d3 once a week.

I would do calcium w/o D3 with every feeding. Calcium w/d3 twice a month and a vitamin supplement twice a month.

Staff member
There a few reasons why this could be happening. I would get a fecal done at least because my veiled started regurgitating his food due to intestinal parasites. Got a fecal done to know what kind, dewormed him and he didn't do it again.

I'm feeding him medium sized crickets. Occasionally a large one gets mixed in though. He's moved up from the smalls. I'm ordering some small hornworms and butterworms to fatten him up. He's not too thin, but he could stand to thicken up a little.

He is drinking fine, and his back legs are fine. He's moving around just like normal and active like usual. He seems fine, other then refusing food. It's only been a day, so I don't want to overreact. But I don't want to ignore something that could be a legitimate problem either.

If he doesn't start eating by tomorrow I'll take him in to a vet and get a fecal done.

What do you guys think about his size? He's growing, no doubt. But he seems so small compared to some panthers close in age that I've seen on here.

As far as the supplement schedule, I know mine has been far off. I've been reading up and my new schedule will be:
MTWThF - cal w/o D3.
Sat - nothing
Sun - Multi/Cal w/ D3, alternated (each twice a month)

That seems to be what a lot of forum users seem to be doing.

If he is only three months old then I think he looks fine in the picture. I would be feeding like 1/4 inch crickets. He surely doesnt look skinny in the picture either from what I can see

A little off topic, but since his picture is in this thread, does he look like a boy or girl to you guys? I asked this about two months ago, and I got as many girl and boy opinions. He's almost twice the size he was last time I asked. What do you guys think? Girl or boy? His tail is getting thicker at the base.

Based on color and bulge, I would say definitely boy.

Lingling said:
A little off topic, but since his picture is in this thread, does he look like a boy or girl to you guys? I asked this about two months ago, and I got as many girl and boy opinions. He's almost twice the size he was last time I asked. What do you guys think? Girl or boy? His tail is getting thicker at the base.
Click to expand...

Good news! He's eating again, and keeping it all down so far. Drinking and waiting for more crickets

Even so, I will still have the fecal done. Just in case there's an underlying problem. He's doing great, however. Eating everything he can catch.
E

I was going to make a comment, but as he's eating again, I'll just say YAY!!! That's good news. And, I think having a basic fecal and vet visit is a great idea, even if you haven't had anything scary happen.

Lingling said:
Good news! He's eating again, and keeping it all down so far. Drinking and waiting for more crickets

Even so, I will still have the fecal done. Just in case there's an underlying problem. He's doing great, however. Eating everything he can catch.
Click to expand...

It could be possible that one of the crix he regurged was diseased or tasted bad. He got "rid" of it and was suspicious of other look- alike feeders that might also taste bad (until he got hungrier). Sometimes if you change your gutload ingredients it will change the taste of the feeder insect and spark a bit of new interest.

Chams must learn what is safe to eat and what's not. Once burned twice shy.

Staff member
I would still highly recommend getting a fecal done. My veiled would regurgitate, eat fine for a week or two and then do it again. It happened 3 times before I took him in and sure enough, he had wormies. Can't remmeber which kind...
You must log in or register to reply here.

Sleeping during the day?

Cham with mbd not eating?

Beau wants out of his cage