I am looking for some good cricket food recipes! If there is anyone out there that has one or even a couple please post links or tell me what you use!?!?
Also does anyone out there use roaches for feeding veildeds?
thanks
again guys

i gutload my crickets with veggies, cricket cubes, potato flakes, and fruit. Just make sure you cut up very small chunks, otherwise they don't eat as much as you put in and you get a stinky, mushy mess. Crickets are fairly easy to gutload because they will pretty much eat anything. I wouldn't waste money on the dry Fluckers brand cricket food powder because they get more of the good stuff from the few minutes it takes to cut up fresh stuff.
C

I use Wer gutload and the occasional fruit and greens.

I also have been using the W.E.R. http://www.wildeyereptiles.com/catalog/index.php?cPath=24&osCsid=f1ae59826dddeb6d3c067c6a3c6df17e gutload for over a year. The crickets and roaches love it. I also add various leftover fruits and veggies along with a cotton pad as a water source. Even though I only need about a pound of gutload every month or so, I buy about 10 pounds at a time and sell the extra to friends, neighbors and even supply the local reptile store. I've been doing it at "cost" so if anyone wants to stop by and buy a pound, just let me know . 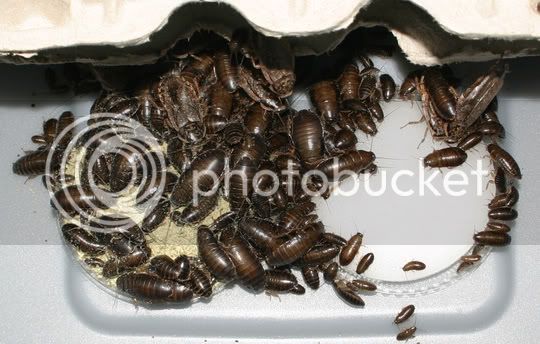 i been using the flukers until i can afford the WER i also throw carrots , lettuce ,potatoes etc its been working ok and its very cheap if you buy the 5 pound jar.

There are no decent commercial gutloads where I live, and it's not economical to ship in stuff from the States in the small quantities I use them, so I've been using a gutload I prepared according to the recipe on the AdCham site: James / Wells / Lopéz Gutload

Some of the ingredients can be a bit difficult to find (I get most of them from health stores/pharmacies), and you won't save any money over buying commercial gutloads. But if you don't have access to decent commercial gutloads like WER, at least this gives you more control over how you are nourishing your feeders.
And if you read Jason Deschamps' article "Gutloading Basics" you'll have more of an idea of what substitutes to use for the one or two ingredients that you can't find.

I also came across a link on another forum to a site with very useful information about the nutritional content of gutload ingredients and feeders: Food Chart (don't worry about the fact that the site is dedicated to Bearded Dragons)

I usually put dry gutload in one saucer, and then fresh fruits/veggies daily into another saucer as a water source, and keep both saucers inside my cricket box.

PS. Dave: I liked that pic of your roach feeders. I'm desperate to get hold of some to breed. The only ones I've found fore sale in S.Africa so far though are Madagascan Hissers. They get too big to use as feeders, don't they?
Last edited: Oct 26, 2006

No you can use Hissers just fine. Ask Brandy about them, I beleive she uses them.

I used hissers for a while but decided to cut back to just Lobsters and Orange Spotteds (Blaptica dubia) these days. Just make sure that the hissers get used before they get too big, otherwise, you'll have more breeding stock . Before feeding-off any of my roaches, I always remove the 4 rear legs. 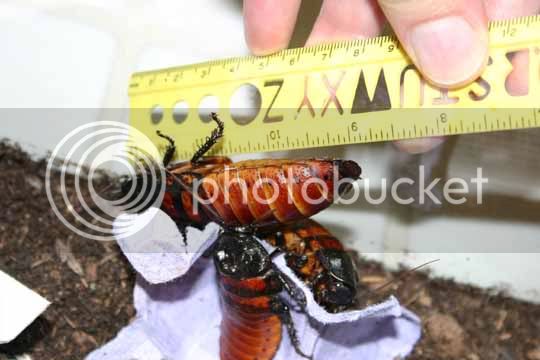 Egg stick before it gets pulled back in: 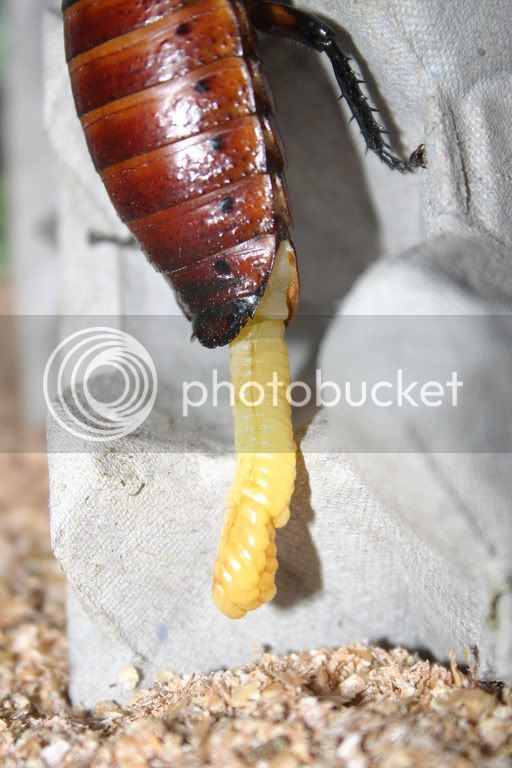 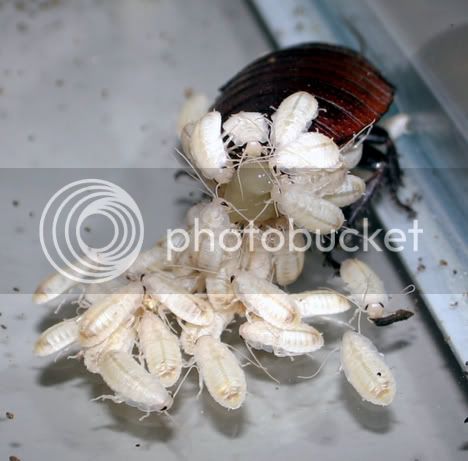 In a pinch I found that commercial fish food and flake is readily eaten by crickets...........I mean they burn through it.

I figured that if I can feed it to my fish to get them as healthy as possible it cant hurt my crickets.........

This was for some domestic toads I saved off the side of the parking lot and captive raising tiny toads into adults was a headache but the crickets loaded on fish food seemed to make the toads grow fast. I went from pencil eraser sized toads to half dollar in a month or two.

hybrid said:
In a pinch I found that commercial fish food and flake is readily eaten by crickets...........I mean they burn through it.

I figured that if I can feed it to my fish to get them as healthy as possible it cant hurt my crickets.........
Click to expand...

You should. Fish flakes have extremely high amounts of Preformed Vitamin A, which is a somewhat controversial source for Vitamin A for chameleons.

What would be a good source of preformed vitamin A ?
K

Will's (the previous post to yours) told you that fish flakes have lots of preformed vitamin A in them....and that's a reason for NOT using it.

Generally, preformed vitamin A come from animal products and beta carotene comes from greens, fruits and veggies. Beta carotene does not build up in the system.

While its debatable as to whether chameleons need preformed vitamin A....its definitely not good to overdose it because its fat soluble and builds up in the chameleon's system.

http://www.zoonews.ws/IZN/318/IZN-318.htm
"Chameleon yolks contained considerably higher levels of carotenoids than levels previously reported from two viviparous lizard species, and β-carotene concentrations were of the same magnitude as reported in grazing tortoises. Measurable concentrations of retinol at all stages of egg development suggest effective conversion from carotenoid precursors, with concentrations similar to those measured in other lizard eggs. "

You asked..."What would be a good source of preformed vitamin A ?"...do you mean vitamin A and nothing else? If not, Nekton-Rep contains it and so does Reptivite....but I don't know if they would be considered "good" sources or not.

In Connie Dorval's book CHAMELEONS IN CAPTIVITY she mentions that panthers require higher doses of vitamin A than most other chameleons and I was looking for a source.
K

I can only tell you my own experiences...when I used to use Nekton-rep (with preformed vitamin A) I had chameleons with MBD and now I use Rep-Cal's herptivite (beta carotene) and have not had a case of MBD in a chameleon for years. However, I have also changed my methods of gutloading and other things that may be part of the reason for no longer having MBD problems with chameleons.

I have had a lot of chameleons autopsied and only one ever came back with a vitamin A deficiency.

D3 from supplements and preformed vitamin A can build up in the chameleon's system...but lack of both vitamins is also a problem...so its a tough balance to achieve.

This article talks about overdoses and defeciencies...
http://www.seavs.com/case_studies/lizards/chameleons.asp
"# The exact requirements for vitamin A and D are no the same for all chameleon species and are higher for growing juveniles and reproductively active females.
# Excessive vitamin A supplementation may result in interference of vitamin D3 metabolism, leading to MBD.
# Excessive vitamin A supplementation may result in organ toxicity (kidney and liver) some times causing gular edema and reproductive problems such as sterility.
# Inadequate amounts of vitamin A may cause eye problems, neurological dysfunction, spinal kinking, dysecdysis and the formation of hemipenal plugs.
# Excessive vitamin D3 supplementation can result in organ toxicity (gular edema)metastatic calcification, gout, and pseudo-gout (calcium-like deposit).
# Inadequate amounts of vitamin D3 (either in the diet or by conversion from exposure to ultraviolet light) can lead to MBD."

Sue is a well-known vet that has written articles and papers and this is what she has to say...
http://www.rocksolidherpetoculture.com/index.php?option=com_content&task=view&id=57&Itemid=75
"Current thinking is to dust with LOW vitamin A and low-to-medium beta-carotene. Give crickets low-to-medium vitamin A and high beta- carotene."

All I can say is be careful!
H

I think being carefull is the key to anything.

I never said it (fish food) should be a staple........I just said I used it to feed the crickets in a pinch.

Normaly I feed them a combination of dog food (crushed) and breakfast cereal which might get some kind of oatmeal added to it or something else.

Then of course it gets any fruits and veggies that I think are about to go bad from me not eating them quickly enough.

I think its fairly obvious that you can easily make some really good gutload yourself.

Ive also used boiled egg yolks to powder up into it for extra goods.

So let me ask this, aside from the information on Sandra's blogs, is the info and are the links in this thread outdated?. Just curious if the Vitamin A issue has evolved over and above the information contained here. Thanks.
You must log in or register to reply here.

The feeding process.... from keeper to cage