Lenny and Pat...... Pat was snooping around some lower branches and saw some food so he surfaced to take better look... he came up just under Lenny. 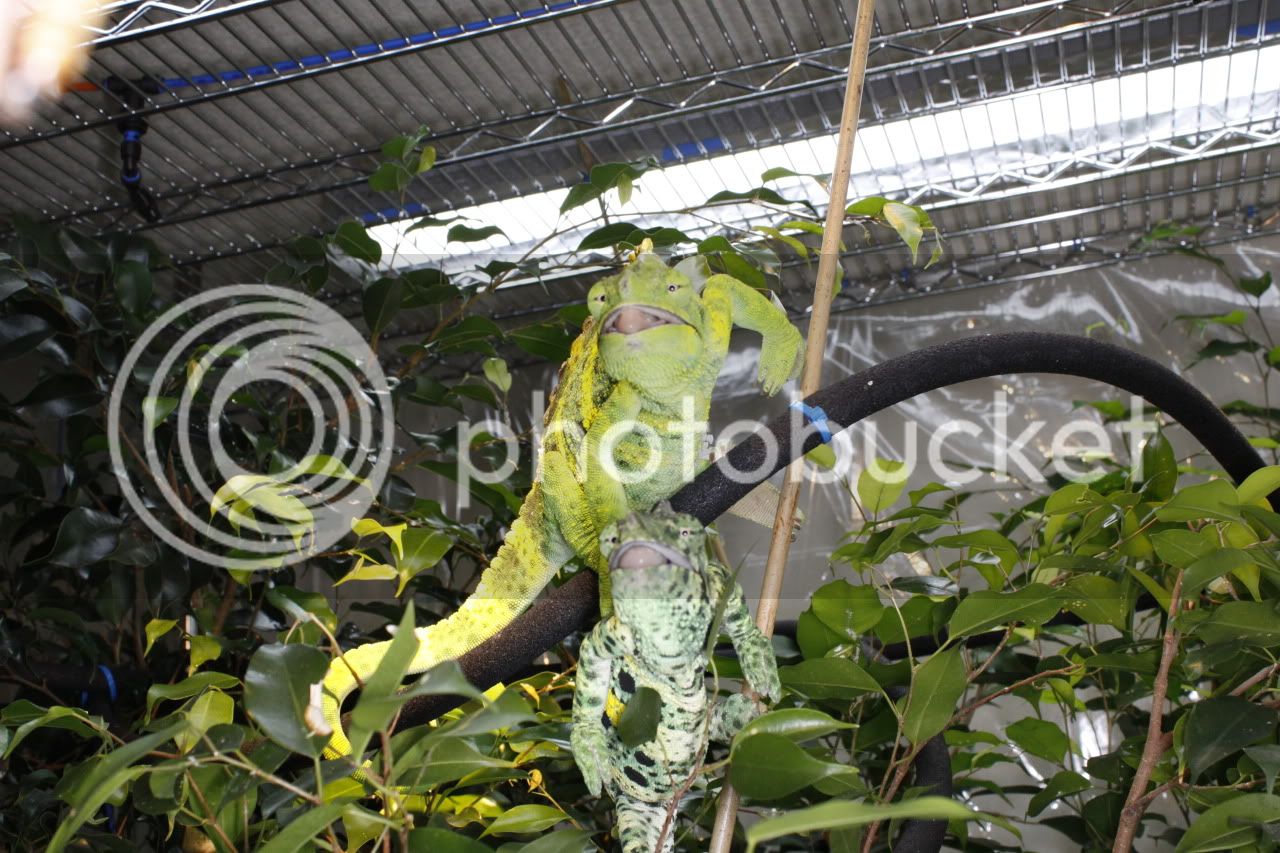 Pat takes a shot and misses.... 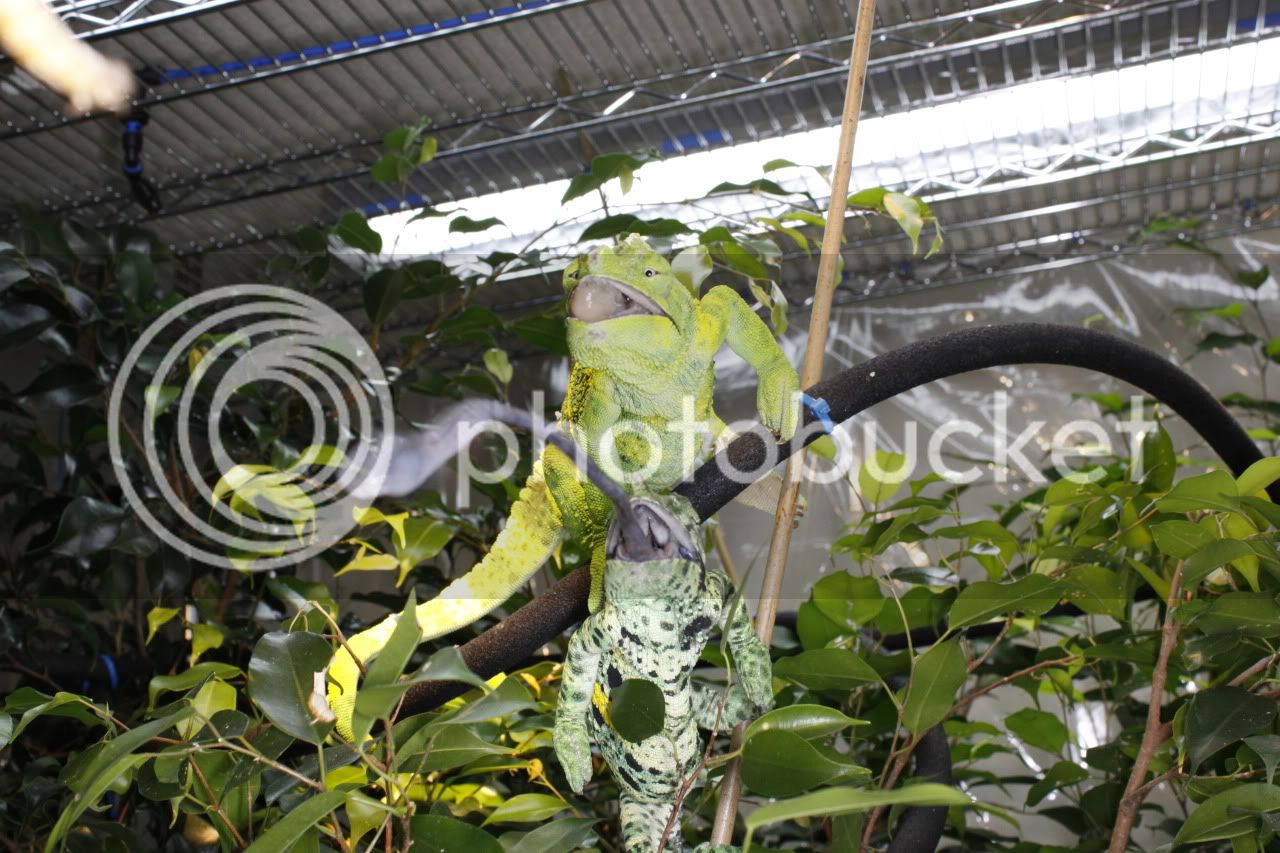 They were both glued to the prey... i could move it anywhere and both of them would follow in unison! 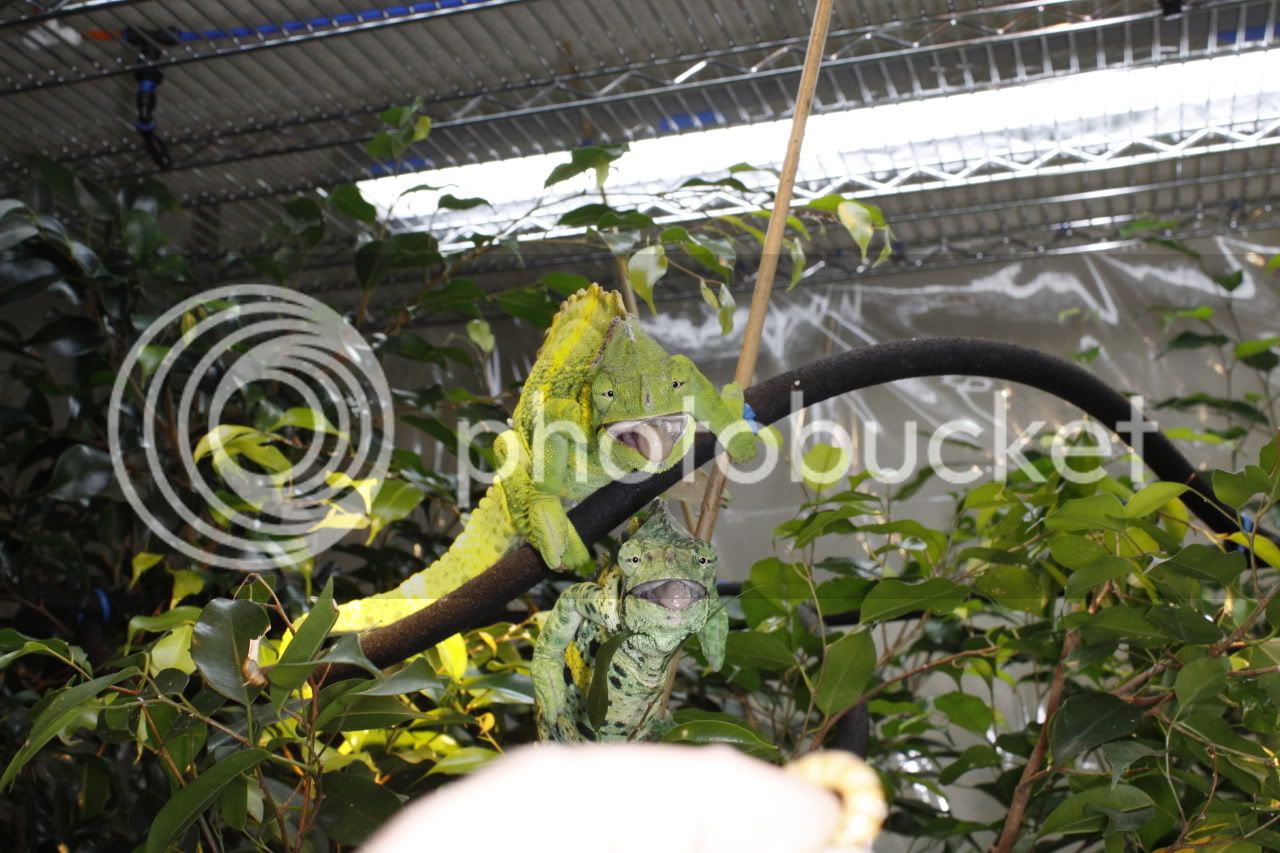 And Lenny gets the catch.... I love how when she gets something her lips fold out as you see.... Pat is all bummed out hahaha 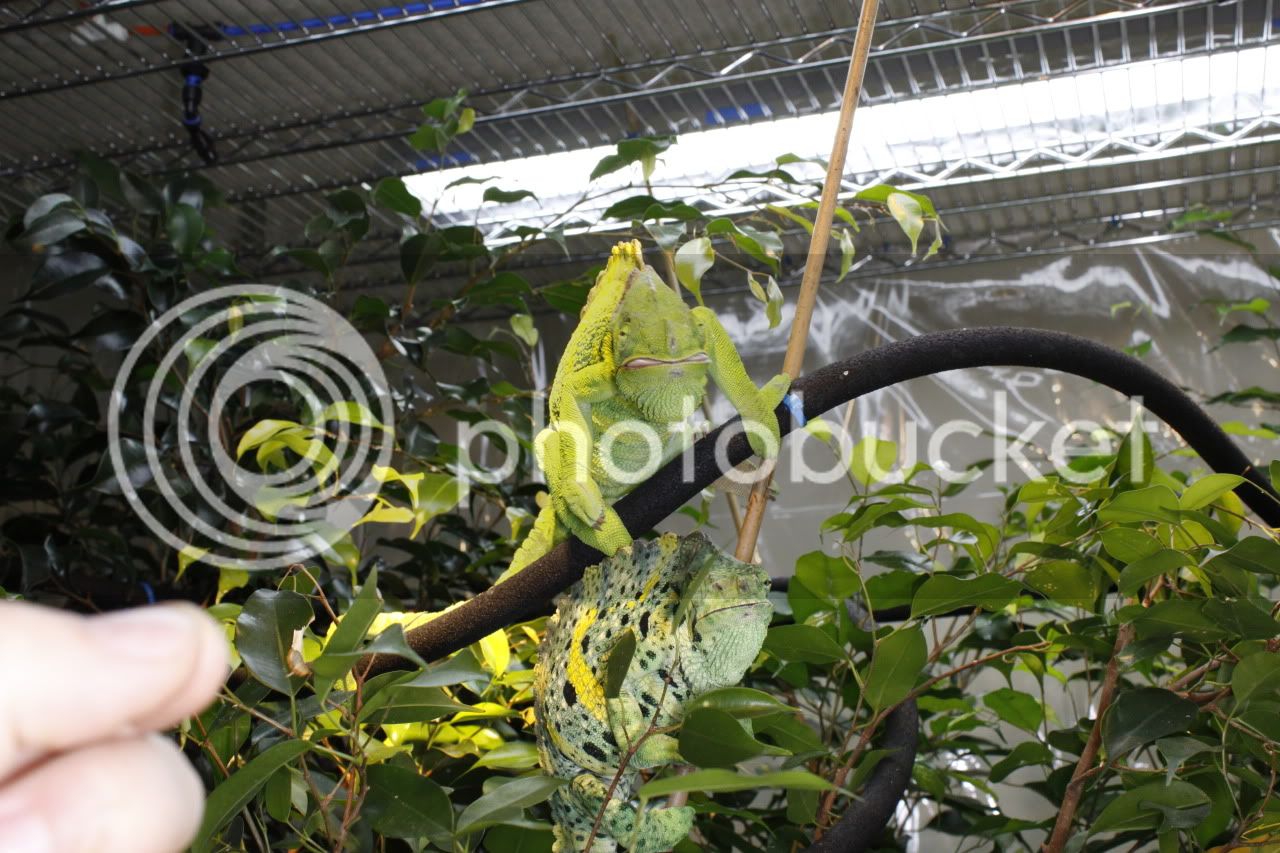 LOL! They are green pigs I swear. Mine watch me and if they think I am even coming near the cage they are ready to shoot!

Those pics are amazing! They just look so great together, and I just love those pics where they both have their tongues poking out - they made my day! What a gorgeous pair! (I was expecting to see green 'pygs', lol!)

They are very nice.

Just want to know how much do they eat every feeding and how often do you feed them, and what are they being fed?
I am told that mellers eat way too much! Which is one reason why I am put off from them.

I don't think they eat too much more than my large Veileds or Oustalets-maybe 10-15 large crickets every other day? I don't really sit here and count the crickets though!

That tops one's face is hysterical in that picture

That is brilliant. I had to do a double take lol.

Fantastic pictures, I assume after seeing your adventures with your new camera stuff, next months chameleon of the month will be a mellers? Based on those pictures it should be.

Class photos!The 2nd to last one is my favorite

Great pics...
Now if those green pigs could fly, I would be even more impressed.

LOL!! I sure hope Pat got something for his efforts!


chameleonneeds said:
They are very nice.

Just want to know how much do they eat every feeding and how often do you feed them, and what are they being fed?
I am told that mellers eat way too much! Which is one reason why I am put off from them.
Click to expand...

Melleri don't really eat much more than the other chams.... it's just that they will eat more if you let them. It isn't that they require all the food they can eat, it's that they just like to stuff their faces. You can't let your melleri eat from a bucket of 200 crickets..... they'll eat half of them before they will stop on their own... and getting them to lose weight is hard.... My big guy Henry is impossible to put on a diet. ya feed him less and his body retains the food... ya feed him more he just poops more and holds the weight, and he is over weight. He is fat but at least more active now so maybe hes losing weight moving around... I haven't weighed him very recently.

This is how I determine they've had enough food.... A: I just keep track of how much I just fed the cham... maybe 3-6 crickets (every other day sometimes I might for two days between feedings) B: I watch how fast they are ready for food again.... as in, if I offer the cham food and they aren't super eager to eat, I cut them off. Sometimes I'll feed one of them a super worm and before they have it down the hatch, they are aiming for the next one... I obviously make them finish the last worm before feeding again, but that is an eager beaver who will get another worm. If the cham just keeps chewing and ignores the next food item being offered, I feel they are 'done' even though they would eat 10 more if I let them. They will keep eating after a couple of food items, but they get slower (at least mine do......). The only chams I let pig out are my three smaller guys. Chris is runty and doesn't always seem to eat enough, he is super thin. Airin and Alex both are being treated for parasites and are also very thin and still growing. I let these three guys have 8-12 crickets per feeding.

Lance, give them another couple million years... those lobes will be big enough for flight!

Julie, Pat did get some food. He is a goof. When he wants a food item that another cham is already aiming for, he'll stop aiming and look at them like hes yelling "HEY! THATS MINE!" and then go back to aiming again.... after the other cham snags the food he'll turn to the other cham and puff his chin a bit giving the other guy the 'stink eye' look. You can hear him cursing! hahahaha! Pat is such a dork though, he'll come clear across the free range stomping through the trees when he sees another cham getting food. He hasn't learned that I feed him where he his... I don't make the chams go into other parts of the free range to eat because each melleri establishes their area.... He seems to think the entire free range is his.
L

Nice funny pictures LOL, Hope to get my meller cham this year... wish me luck

Thanks for the pictures and then elaborating with the other post. That's an excellent description of how a group of Melleri act and eat. My beloved Layla was fully grown and I was trying to restrict her intake. My others are still growing and I wanted them to have more food than Layla. It was hard to do. She would be on one end of the free range and the others at another end. When she saw them getting food she would "run" over to claim what she thought was her food.

Mine are so greedy they will actually zap roaches out of each other's mouths. I have to feed them each in rapid succession so they don't start zapping each other. Green pigs are right. The only lobe flapping or bobbing I've ever seen in my group so far has been over food. Thanks again Kevin. I hope there is a photo contest theme this year that would allow entry of one of those photos!

Yeah, I feed the adults every other day, but Newbie has gotten more since June when she laid her first clutch. She is a little woofer. Fria, on the other hand is a little princes (or old queen rather) and refuses to eat out of her bucket. She will only eat if she is hand fed. But when she does, she will try to take another one before she is even finished with the first. Our new male, however, is getting fed every day because he needs to put some meat on his bones.

When I had Newbie in the free range with Magna Cham last weekend (after the mating), I was giving out horn worms and I had already given Newbie one so I placed one on a branch right by Magna Cham. Newbie turned her head and zapped it away from him and she was about 3 feet away! Heaven forbid that anyone give any attention to anyone but her!

Lizardboy76: You will get yours. Apparently, I know how to pick them, so I will find you a good one.
C

I lve melleri they have suck amusing personalities!!!!!

PardalisGirl said:
Mine are so greedy they will actually zap roaches out of each other's mouths. I have to feed them each in rapid succession so they don't start zapping each other. Green pigs are right. The only lobe flapping or bobbing I've ever seen in my group so far has been over food. Thanks again Kevin. I hope there is a photo contest theme this year that would allow entry of one of those photos!
Click to expand...

lol Its very funny to see one taking aim at the other... like 'hooooollllllllld still!'
You must log in or register to reply here.

May 11, 2021
JulianAndGuthixChams
J
I
My husbandry form and introduction

F
How/What to feed a chameleon missing half her teeth