Alright so I have a very strange story to share with everyone here.

As some of you know my first clutches of Sambava babies started to hatch a little over a month ago. My last egg just hatched 3 days ago. I have kept very good (written) records of when they hatched and what cage they got put into. I started with 41 eggs from 2 different clutches (well some went bad a couple weeks after they were laid, but I am not counting those) that started hatching at the same time even though they were in separate containers. Well 2 never made it out of the egg. The egg shriveled about a week after sweating, so I cut them open and there was a dead fully formed chameleon in each one, one even had its tongue sticking out.(I threw those into the bathroom garbage about 2 weeks ago.) One chameleon out of the bunch never started eating and passed a week after it was born (I was very sad by this because it had made it out of the egg, but there was no way to force feed it, I wish there was something I could have done ), well I had my hubby (we are getting married in 9 days so I might as well call him that ) flush him...that was our "proper" funeral for him ...The others are doing very, very well...eating drinking and pooping....never realized how much poop could come from a baby well anyways that is the background information....

Here is the weird part;

I woke up this morning, turned on their lights, waited about an hour and went to spray them down. On top of one of the cages was a little baby. I first assumed I left the lid off of one of the cages...well I checked and I didn't. So I check all the cages, everyone was in place, so I did a count...39 babies...well the math doesn't add up. 41 eggs to start-1 that died and -2 that didn't make it out should equal 38, but now I have 39...I swear I counted them like 10 times, and even took a picture of each one...So I am dumbfounded...The only thing I can come up with is one of the babies from the "bad" egg wasn't actually dead and somehow made it out of the trash can...is that too far fetched?? I have stupid FF's crawling all over the place, so it would have had plenty to eat...it is the only conclusion I can come to. I only have records of 39 babies hatching, one of which was flushed after it died...

Here is my set up. He was on the pink cage on the bottom shelf. There are plenty of cords and other "junk" he would have been able to climb. (we just put this together and I just ordered longer UVB lights, and I ordered some screen cages for the bigger ones) 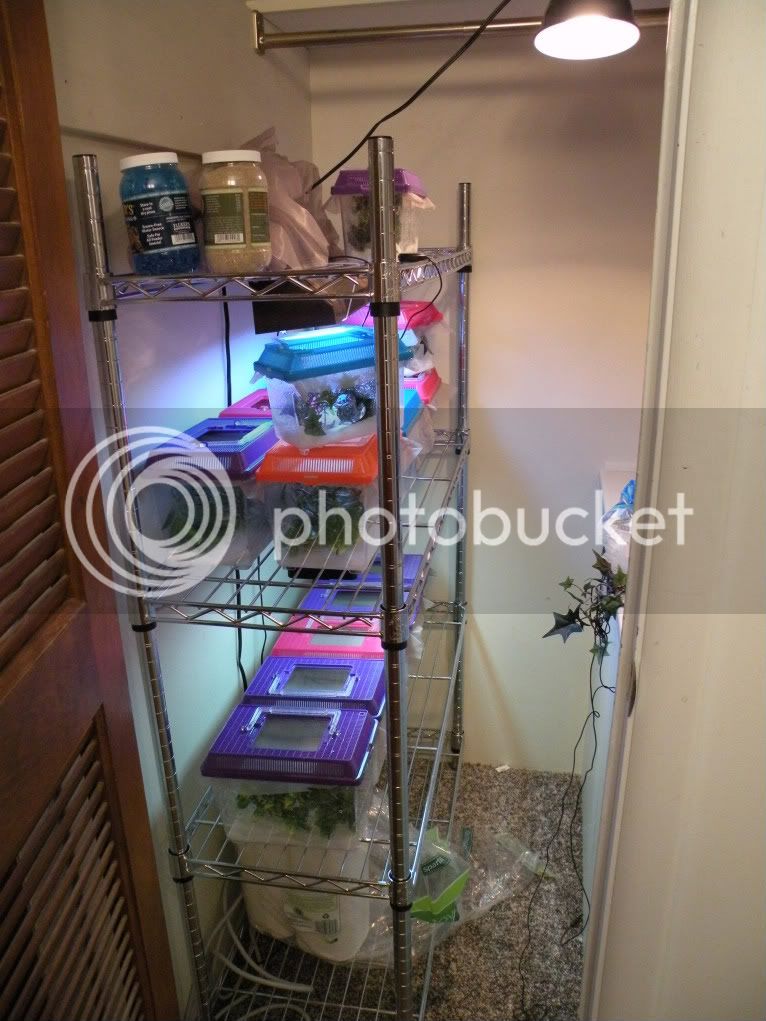 Here is my "extra addition" that I will probably name Lazareth. 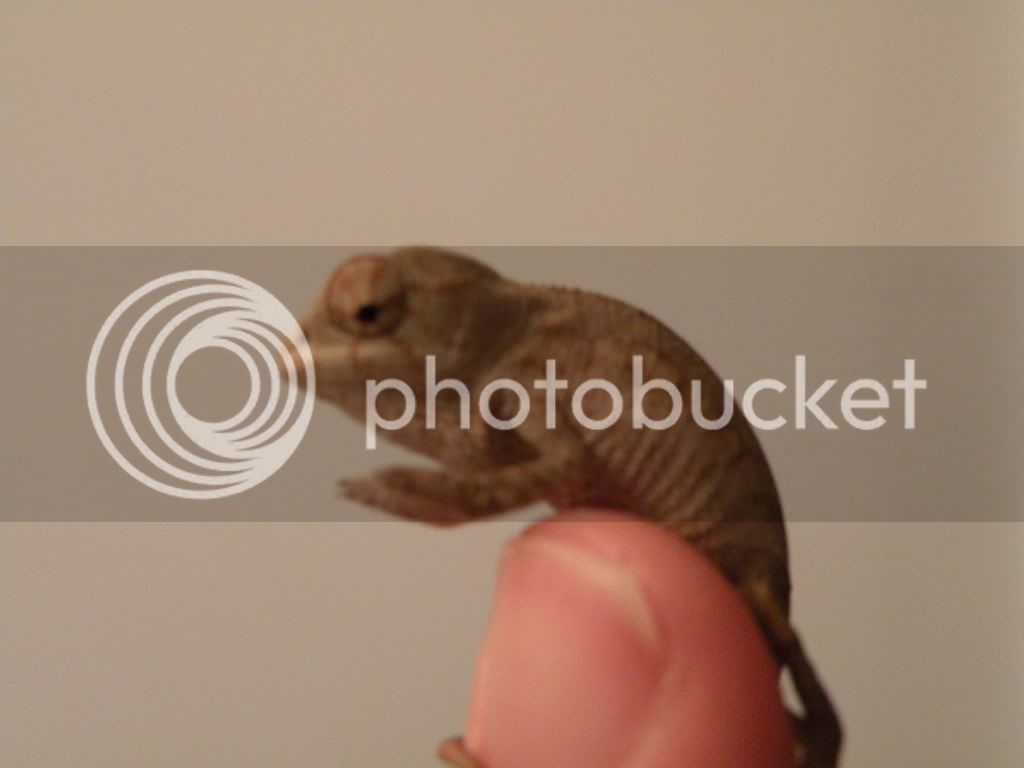 I know this is a very long story...but I did have to give all the background info for it to make sense Let me know what y'all think!

Well, I honestly don't know what to say.
Congratulations! He/she is a survivor.
Can you post pictures of the sire and dame?
Where did they come from.
Curious for a sambava breeding project.
view our sponsors

Did you count the babies as they hatched? You could have had twins, and did not notice it.

I did count the babies as they hatched, so I am 100% positive they weren't twins, that would have been cool though too

Justin; I am going to see if I have any recent pics on my camera. I will post some soon!

Twins are indeed a possibility...but if not...and he climbed out of the trash can and survived on rogue fruitflies for days..WOW! And considering none of the cage tops were a-jar... How cool! Either way, that is a special little chameleon.

Edit: I guess from reading the above twins aren't possible. WOW! It is so cool that the little guy survived and even found the other babies. Aww!

Somebody wanted to get to know it's siblins! lol. That's an awesome little guy you get there!
Hope all is well for them and keep us updated with their progress.

just kidding...congradulations..I am glad you have a survivor.

Ok, sorry Justin, I didn't realize how soon I had to get to work.

But here is a pic of my male the first time he saw a female. (a little over a year ago I think ??) I received him 7-6-05 from Chameleon Paradise. He is CH, so I believe that would make him an F1 right?? He was almost 4 months when I got him. He is awesome, the best personality ever! He only bit me once, a long time ago, but in his defense he was recovering from an eye infection, and I was messing with his eye So this picture is of him fired up, but it takes a lot for him to get those colors because he is so laid back! 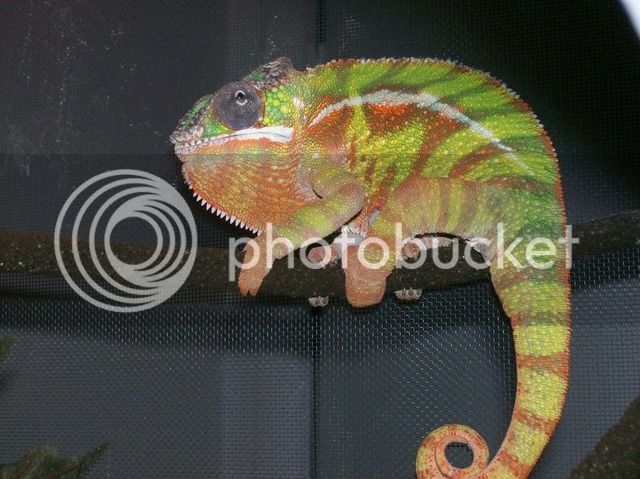 Here is a picture of my female. I got her on 7-26-07 from Nicole Guy at crownedroyalreptiles.com. Her Father is skittles, he is on her website. She was 9 months old and never breed. She is nothing like my male...lets say I have been bit many of times...I only hold her when need be, thank god! She always seems to get the flap of skin between the thumb and pointer finger! 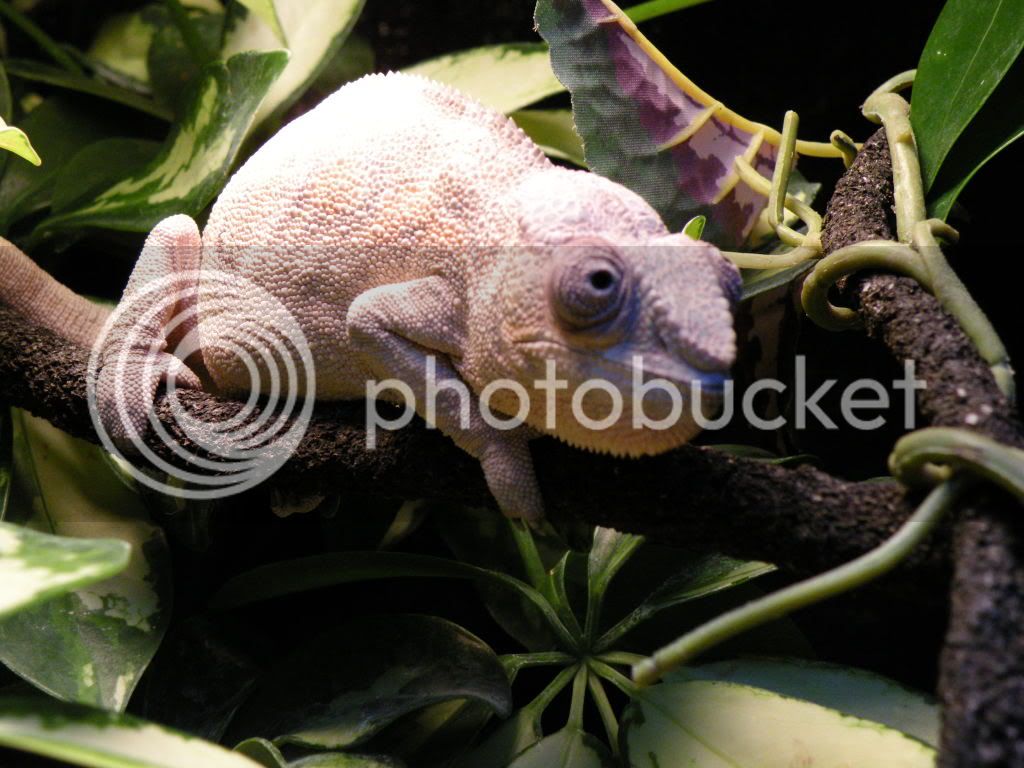 and here is a picture of their last date...if you know what I mean Bow-chicka-bow-wow 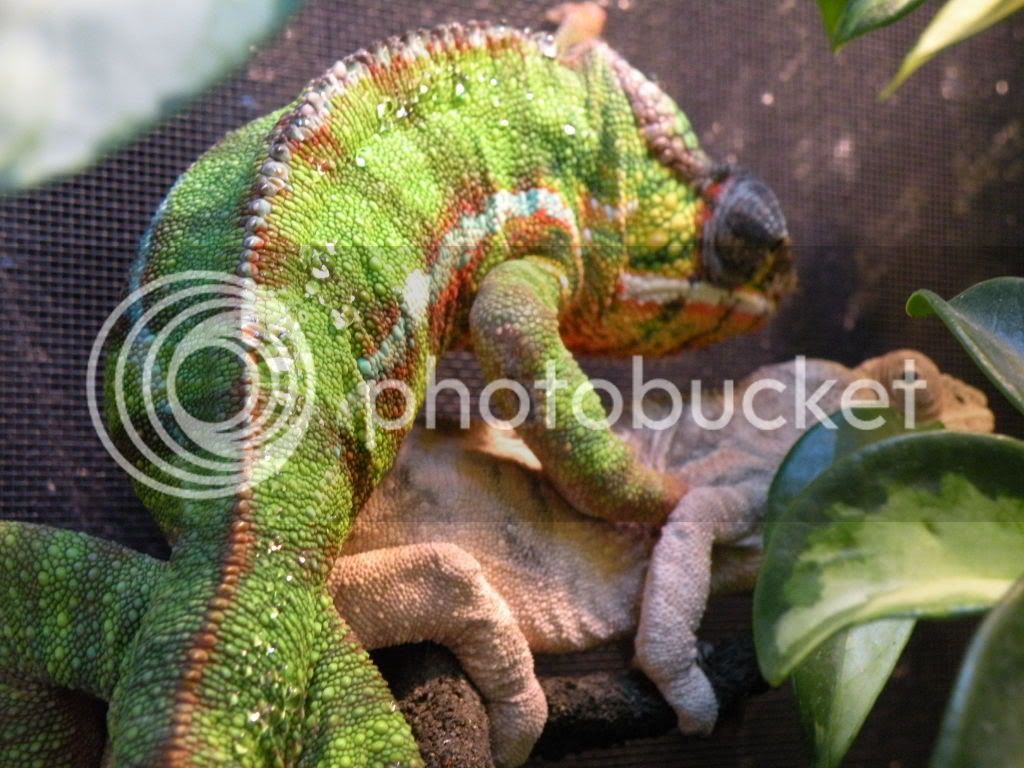 So that is each of my chameleons life stories...well the parents and Lazareth