For everyone who KNOWS you can't keep chams in glass

Staff member
There is a widespread negative stigma and general misconception, particularly amongst US chameleon keepers, that you can not keep chameleons in glass enclosures. I thought I'd make this post to hopefully dispel that myth and talk about the use of glass enclosures for chameleons.

Aquariums are not good chameleon enclosures. While some terrestrial species (pygmy chameleons) can be kept in them, this is simply because they live close to the ground and the top of the enclosure is not far from the bottom of the cage and some airflow is being exchanged. For arboreal species, however, the distance between the source of fresh air and the bottom of the cage is larger and thus, it is not ideal for chameleons.

Breeders in Europe have kept many chameleon species in glass terrariums for decades with excellent results. In the US, glass terrariums have not been commercially available until recently. Up until this point, a glass enclosure meant an aquarium and the majority of US keepers didn't know the distinction between glass terrariums and glass aquariums, glass was glass.

A couple years ago I was introduced to the Exo-Terra Glass Terrariums at a show while I was helping Mike at FL Chams. Mike decided to pick one up as a display enclosure for his Brookesia stumpffi and over the next year I was impressed by how they ended up doing in it and how simple caring for them in these enclosures was. I was so impressed, in fact, I started to wonder if you could keep more arboreal species in them so a year ago, I got a couple and started keeping Rhampholeon spinosus in them since they are a more arboreal pygmy that is typically kept in screen enclosures. I liked how they did so I then decided to try raising baby true chameleons in them. The Rh. spinosus have been in these enclosures for a year now and are doing great. The babies I raised in them did very well and are now in new homes.

While raising a couple clutches of babies in the Exo-Terra Glass Terrariums, I decided to start trying adults of some of the smaller montane species. I gradually started keeping more and more species in them and I've been completely pleased with the results. All the adults I have in them look great and seem very happy. It has now progressed and this is part of my montane setup: 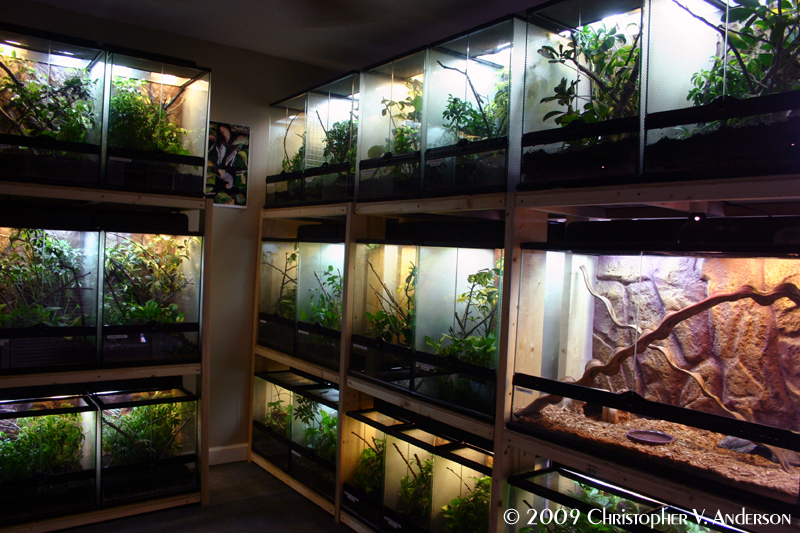 In these enclosures I am keeping a variety of Rhampholeon, Brookesia, Bradypodion, Trioceros and Kinyongia species. I have enclosures of the following dimensions: 12x12x18" (for newborn baby chameleons), 18x18x18" (for terrestrial pygmy species and older babies), 36x18x18" (for terrestrial pygmy species and older babies), 18x18x24" (for adult arboreal species), and 36x18x24" (currently housing a Boelen's Python but I may get more to house slightly larger arboreal species). Size wise, I have up to adult male T. montium in the 18x18x24" enclosures and would consider slightly larger species in the 36x18x24" model. I have all of them fully planted with organic soil over a layer of drainage, just like you would plant a typical pygmy enclosure, and I couldn't be more pleased with how everyone looks.

One thing that is very important to note, however, is that when you use these types of enclosures, you do have to change your husbandry. When I kept my montane species in screen enclosures or even in enclosures with 3 solid sides, I misted heavily multiple times a day. in these enclosures, I mist every enclosure for a minute or two once a day and that is it. Because these enclosures hold humidity much better, the chameleons don't need to be watered as much and if you do, you risk fungal and respiratory infections. Even with misting only a single time a day in these enclosures, I've had excellent success with species with high water requirements and babies.

Anyway, these terrariums aren't for every species but for smaller montane species, I'm very pleased with them. I'm now trying to find a terrarium large enough to house C. parsonii.

Great post Chris, are you sure you don't need an assistant ? I can even sleep on the floor.

So a question about aquariums. IF you stand them on end, with the screen facing you, will that provide enough air flow? Or will it be just as stagnent since there is no funnel affect but I would guess more of a clustered swirling affect.

Thank you for this post.
I have been back and forth with this issue myself.
I house the cristatus in a 1/2 glass enclosure and have had great success.
I would like to add that I have never seen a chameleon recognize it's own reflection in glass. I believe this to be a myth.

So a question about aquariums. IF you stand them on end, with the screen facing you, will that provide enough air flow? Or will it be just as stagnent since there is no funnel affect but I would guess more of a clustered swirling affect.
Click to expand...

The problem with this is UVB lighting.

I have used Exo Terras for years, they are superb, and great for raising babies of all species, and keeping smaller montanes in full time, i use them for both.
Great post Chris.

Thanks for the post, Chris (and the picture). I have started using more terrariums for montane species and love them (although haven't used them for the bigger species such as panthers, etc.). I also use the newer large terrariums for my uroplatus and with good success.

(thanks also for your continued postings "of substance"...)

Dont let Amy go NEAR your collection......you'll quickly be wondering why its "thinning" out....lol She'll find a way to get them into her home!!

Brad Ramsey said:
The problem with this is UVB lighting.

DOH! Good point. What about if the UVB was emitting rays through the screen and not the glass?


Not trying to cause issues here but just bringing up counter points for those that are going to try to " make do".

UV goes through the screen atop the Exo terra, i use 10% so it would be ok, i start all my baby panthers off in the 12x12x18 size basic setup too this i add a live plant in the centre. 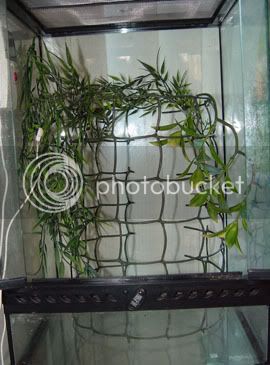 FYI
Where I live, one can purchase acrylic terrariums (similar venting and screen as those glass exoterras) in very large sizes, which I think are quite suitable for panthers. If I didnt build my own cages, those are what I would buy.

Great post! Thanks for sharing with us and making the distinction between the two clear for everyone.

Chris Anderson said:
Anyway, these terrariums aren't for every species but for smaller montane species, I'm very pleased with them. I'm now trying to find a terrarium large enough to house C. parsonii.

I recommend for this a construction made of a aluminium as framework and light pvc or similar plastic plates on the back and the left and right side. For the bottom you could use plastic boxes for industrial useage or a glass construction. I don't know if all those parts are easily available in the US but here they are

I'm a firm beliver that there are no "true" rules when it comes to husbandry or enclosures...or far more then one way to skin a cat.
glass is but one way do deal with low humidity. humidifiers are another way.

sadly, unlike in Canada and Europe, Americans, even up in the northern states just can't find LARGE glass enclosures with screen tops for chameleons.
also, trying to get a large premade glass enclosure home is not easy on the typical consumer.

personaly, I've been using the exotera glass cages off and on for many years with alot of different reptiles with great sucsess.
yet while I'm sure glass will work great for C. pardalis, I also feel that it doesn't give a true change in weather conditions like a screen cage does.
in other words, for low land forest chameleons, the temps and humidity levels change alot throughout the day...something that glass has a hard time replicating. yet with screen cages it's easyer to replicate.

then again, someone like me also has to understand the if they go with a glass enclosure for the fall/winter/spring months, they might be forsed to change to a screen cage once summer hits...as the humidity in the summer stays around 50%-60% at night, but is 80%-90% durring the day.

my point in all this is, that each person has to do what they need to ensure the chams needs, and not follow some hard rules set by a forum.
I'm glad you helped point this out and showed that there are other ways to deal with many of the chameleons we keep.

For the species you are using these for I couldn't agree more on their use.

That's an awesome looking setup man. You've out done yourself.

I do like these enclosures. The one I had altered (I know you remember ) the bottom has been put back in and is currently my Vorax Gecko viv,and I love this setup.

edit: I like them so much I want to get a couple of the big 36 x 18 x 24" Exos for montane pygs and the Vorax will appreciate the extra space once they are adults.
L

Chris, I was wondering if you could get closer pictures of the inside of the enclosures. I switched my bearded pygmies to this type of exoterra and am quite pleased. Never thought of raising babies in one, but I like that idea as well. I would really like to see some of the "insides" though, and if you change them for the different species. Thanks.

Very interesting, Chris! Thanks for posting this. My first cham, Lily, spent her whole life in an Exo Terra terrarium. I too use a 10% UV tube, as the mesh top is quite thick and that was the UV that was recommended for use with the dual top canopy that houses the lighting. Lily was very healthy and I never had any problems with temps or humidity. Amy now lives in the same set up, although I have tweaked the heating a bit to try and stabilise the hottest temp in the low 80's.
C

it s interesting but in the summer and hot night for montane s species you need more air conditioner to refresh the room because glass leave last freshness no??

Thanks for the post your set up looks great! I have been using the exo terra 12x12x18 to start baby panthers and it has worked great.
You must log in or register to reply here.

Pygmys on the mind

Humidity Too High in Glass Terrarium