Staff member
his thread is the third on a series of threads outlining the Exo Terra Expedition to Cameroon I recently returned from. The first two threads in this series can be found here:

After arriving in Bangem, we explored some of the forest around the town. On the walk to the first forest, we unfortunately found a forest cobra that had recently been run over and killed. After exploring some of the forests immediately surounding the town, we were only able to locate a couple Trioceros montium (Cameroon Mountain Two-horned Chameleons) and a couple interesting grasshoppers: 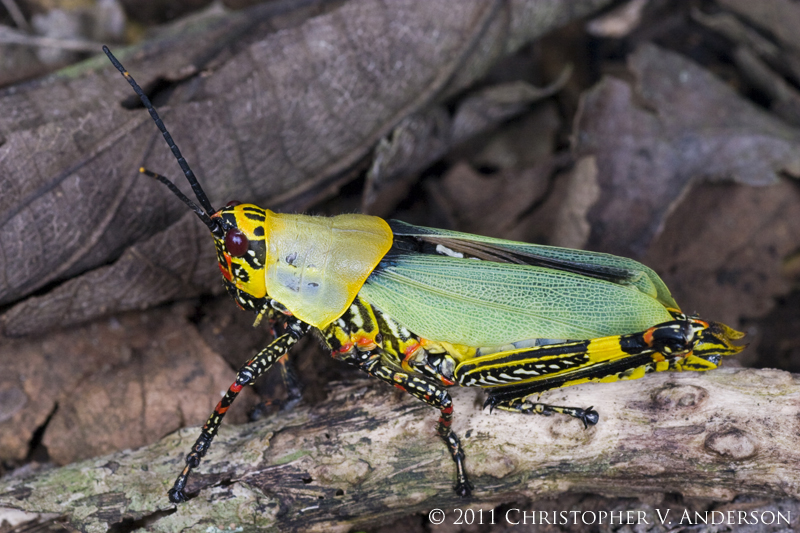 We decided to go to higher elevation and set off to locate forests higher up. Unfortunately the forests on Mount Manengouba are very degraded, making locating primary, and even secondary, forest at higher elevations difficult. Eventually we made our way to Poela Village at about 1800m in elevation, which had some small patches of trees and a riparian area we decided to check out. Unfortunately shortly before we arrived, one of the locals had cut the head off of a 5' Gaboon Viper. 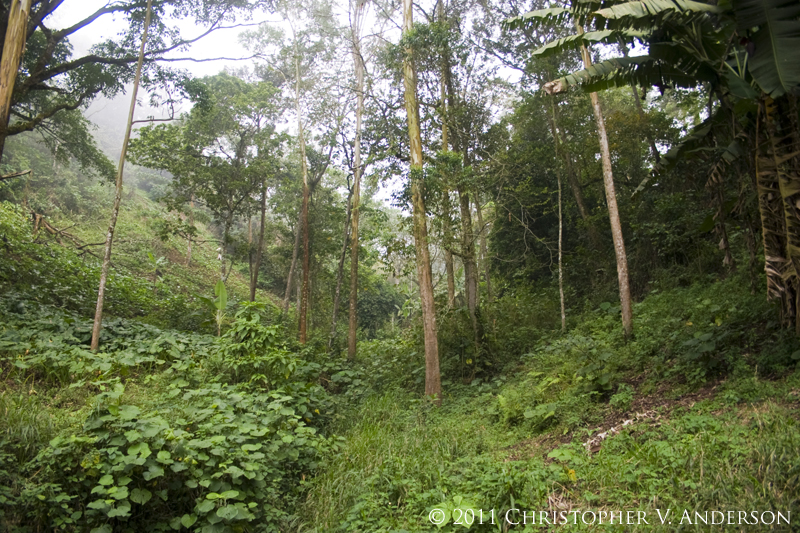 After looking for an hour or so, we located our first chameleon in the village, a young male Trioceros perreti (Southern Peacock Chameleon). This male was located in bramble along the edge of the stream about 18" above the ground. Shortly later, we located a gravid female, this time just over the stream in some overhanging vegetation (about 2 feet above the ground) and then an adult male along the roadside in the grass.

Trioceros perreti is a small and attractive species found only at high elevation in the Bakossi Mountains and Mount Manengouba. It was previously considered a subspecies of Trioceros wiedersheimi but was elevated to full species status late last year.

We decided to wait for dark to try to locate additional specimens. We waited for dark on the steps to the chief's palace and watched the clouds come in: 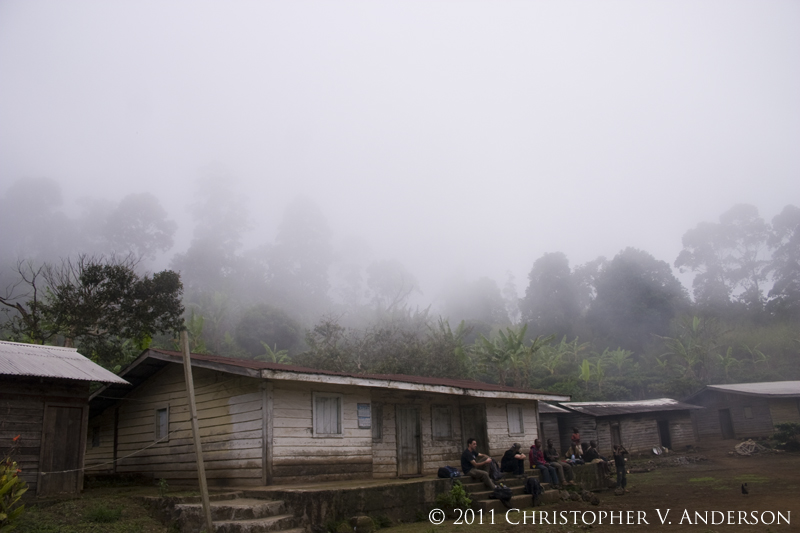 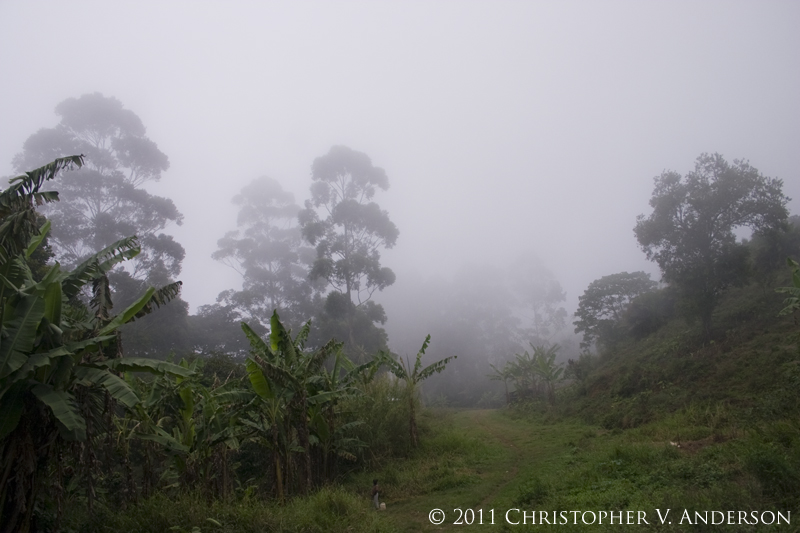 One of the locals explained to us that they used to see the Four-horned Chameleons in the village frequently but they were very rare now and collectors come to the area frequently wanting to buy animals. They said that we were quite fortunate to find "the small chameleons".

Once dark set in, we returned to the riparian zone and in this area and along the road, we were able to find an additional 6 T. perreti. 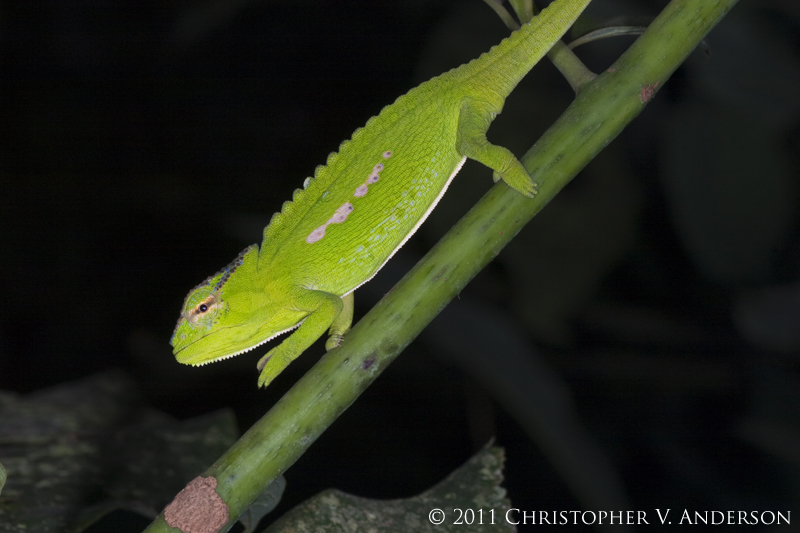 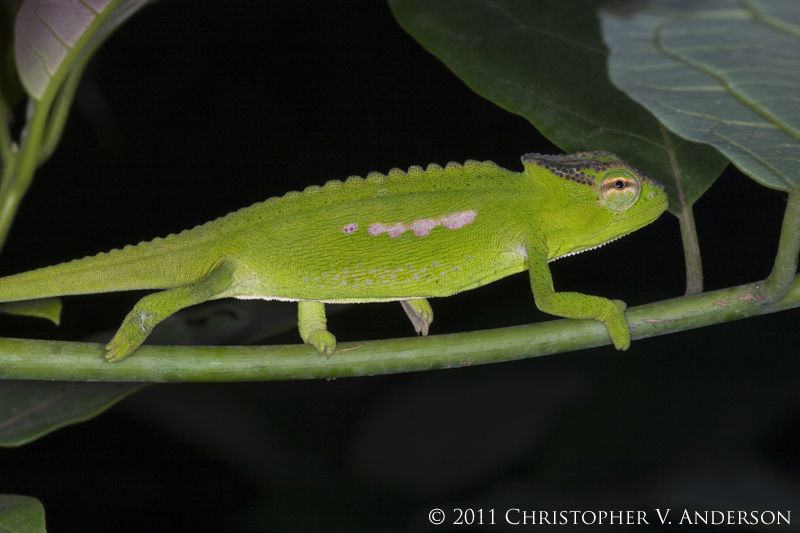 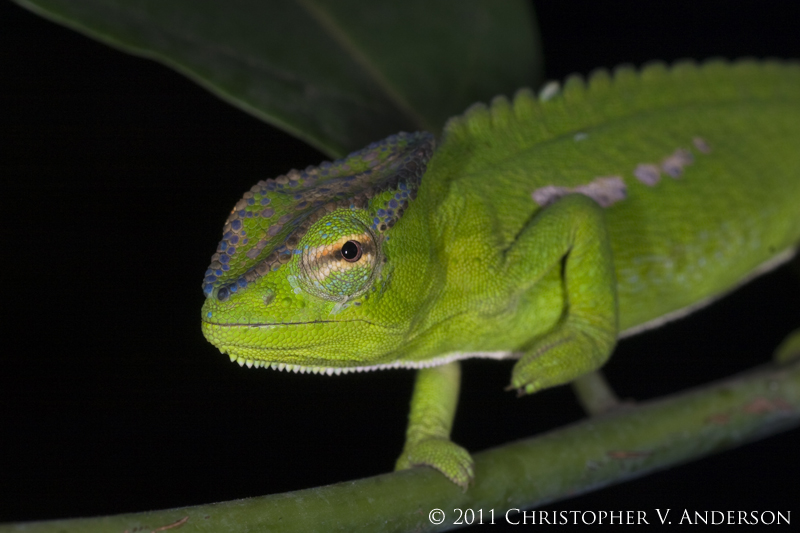 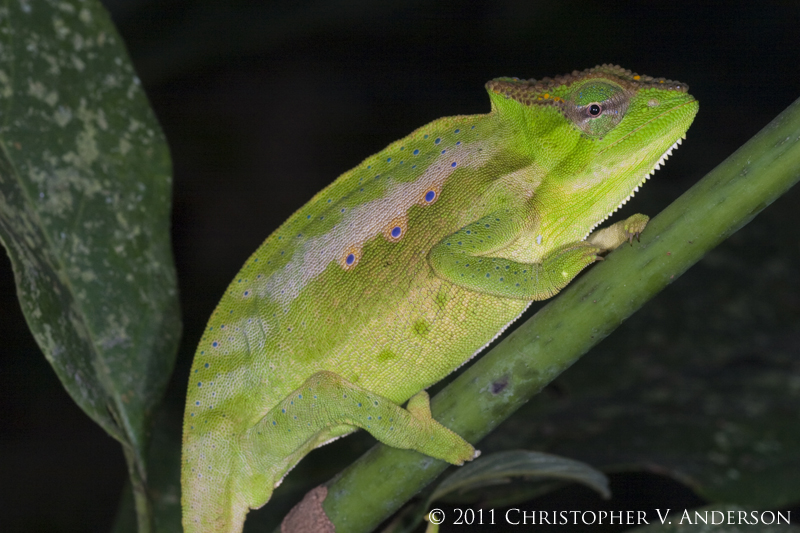 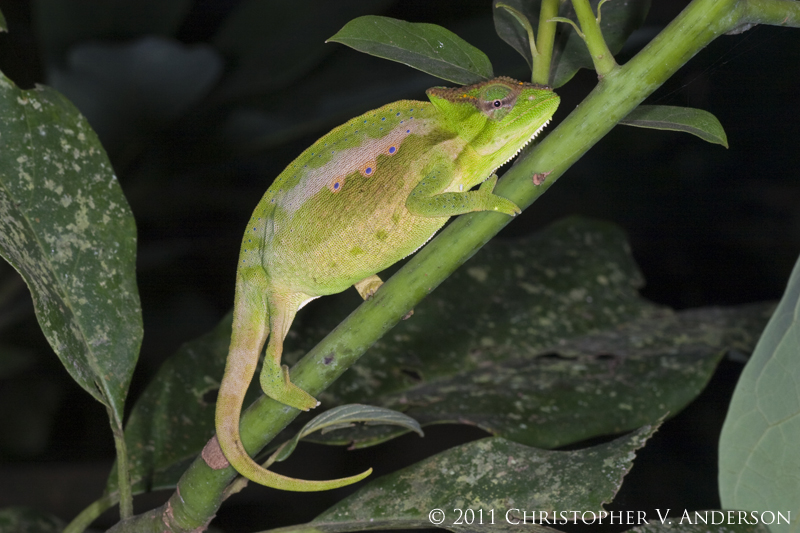 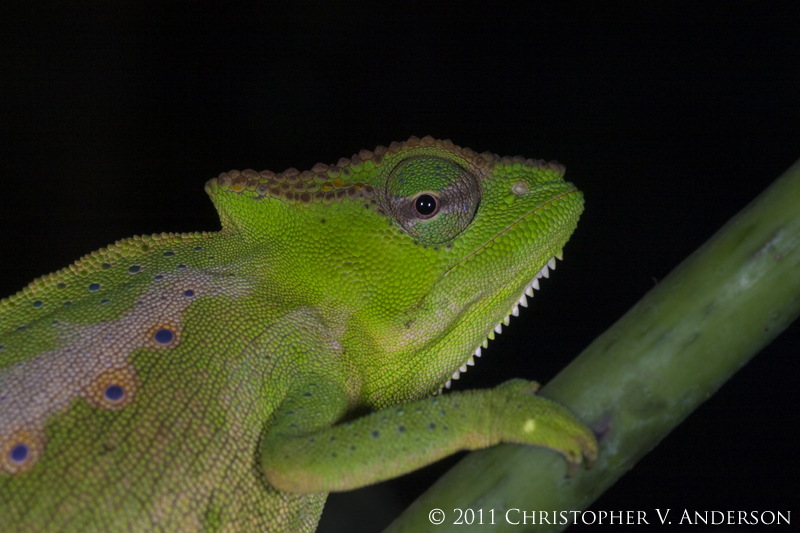 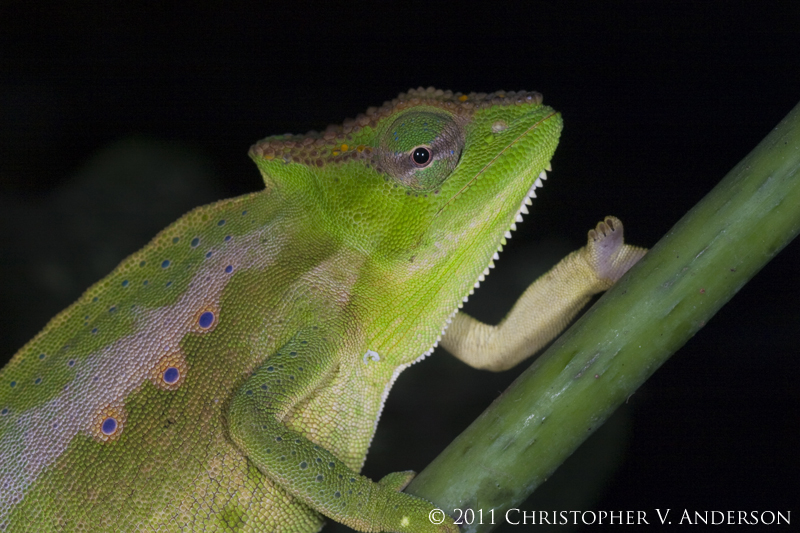 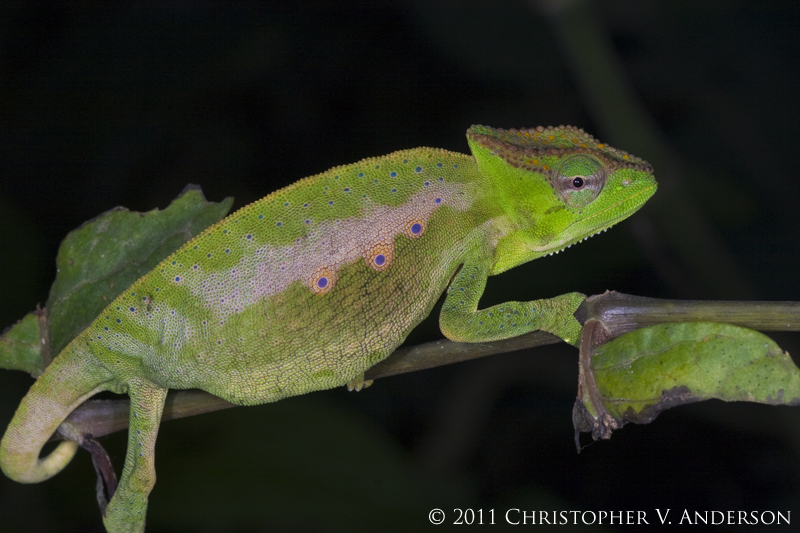 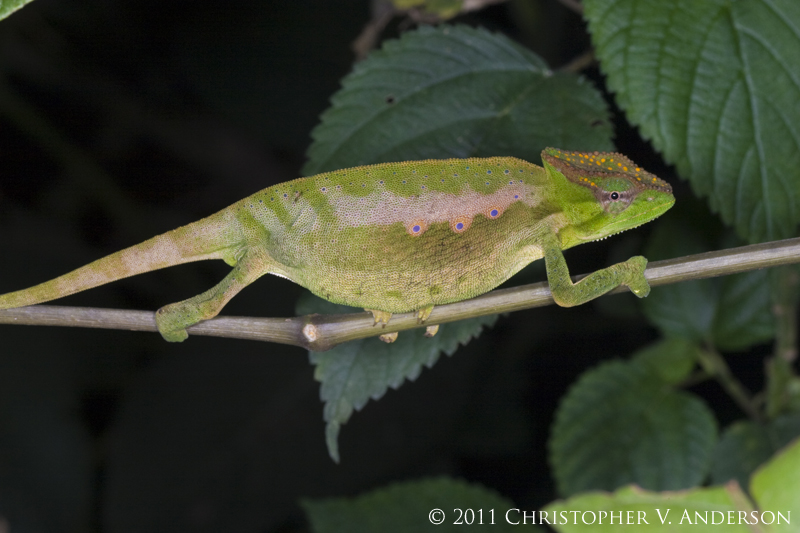 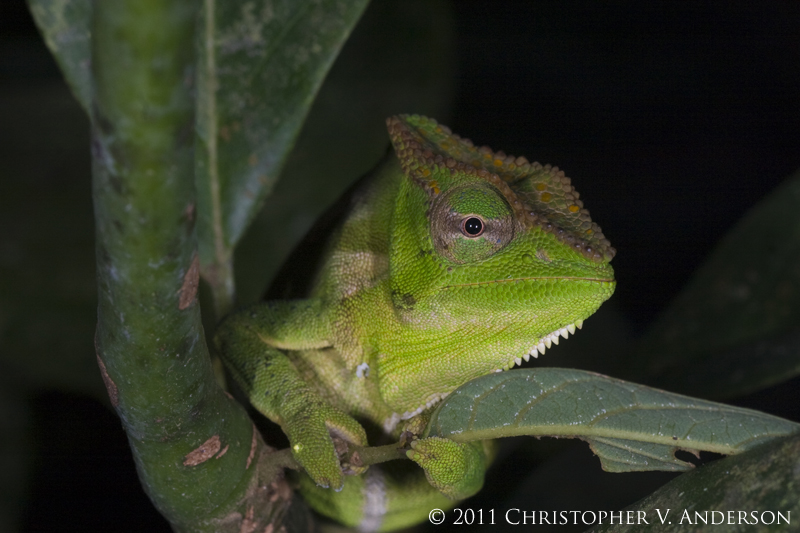 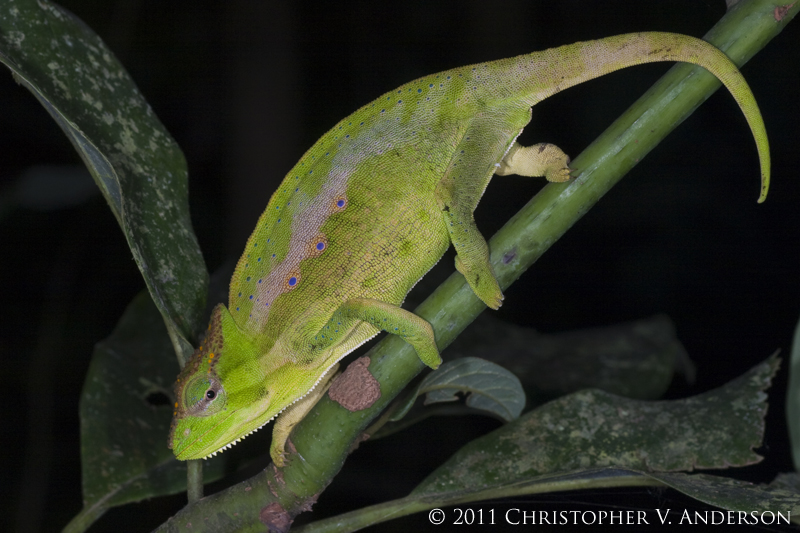 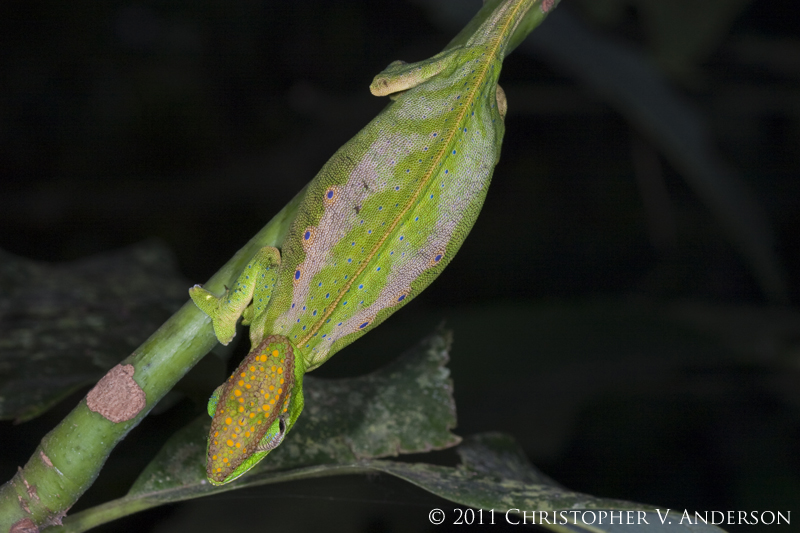 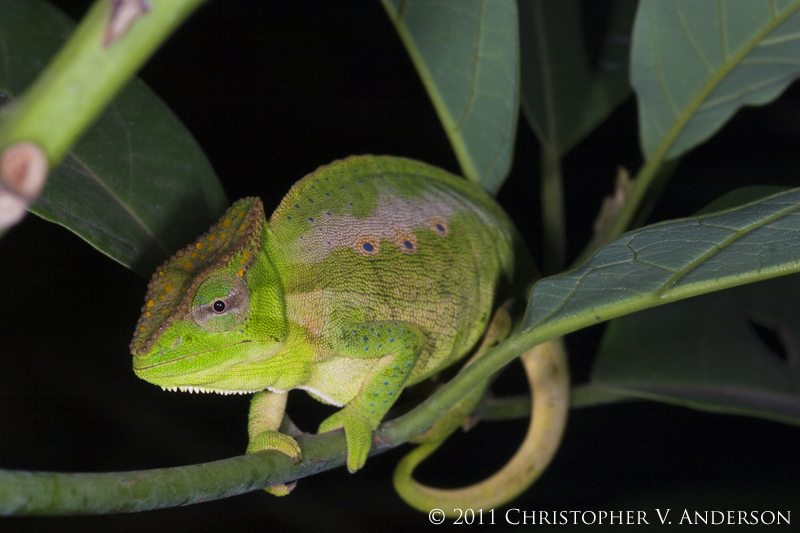 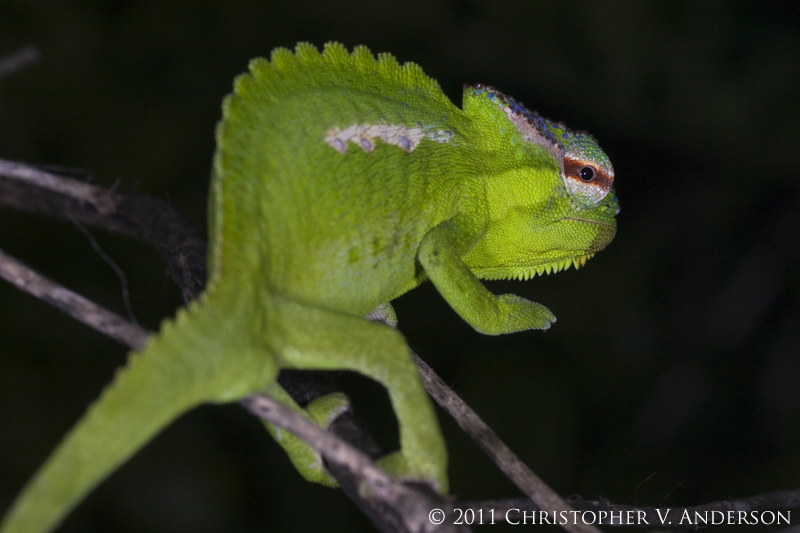 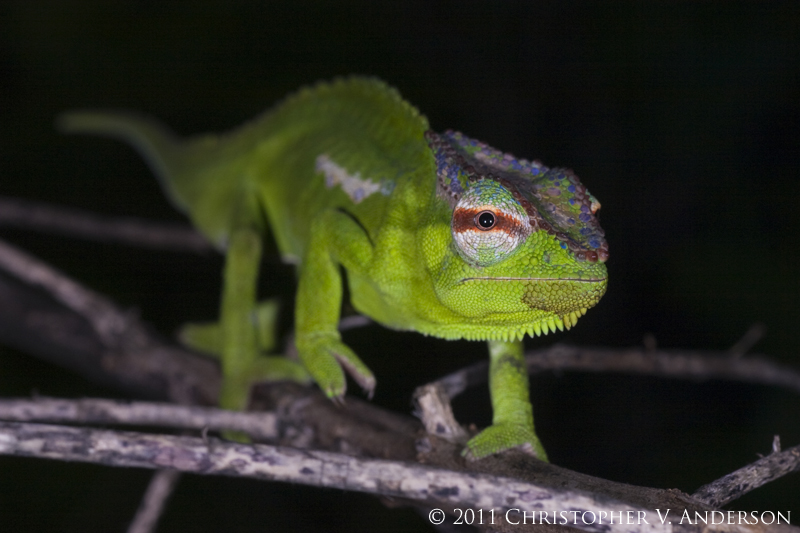 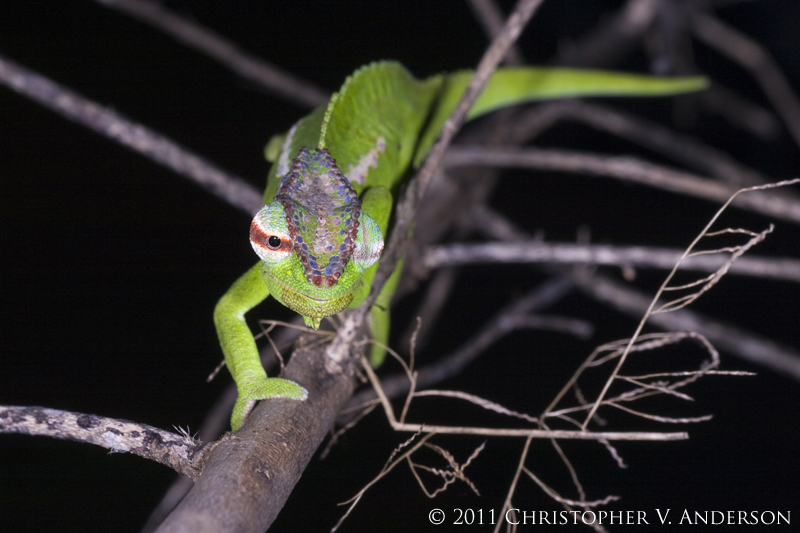 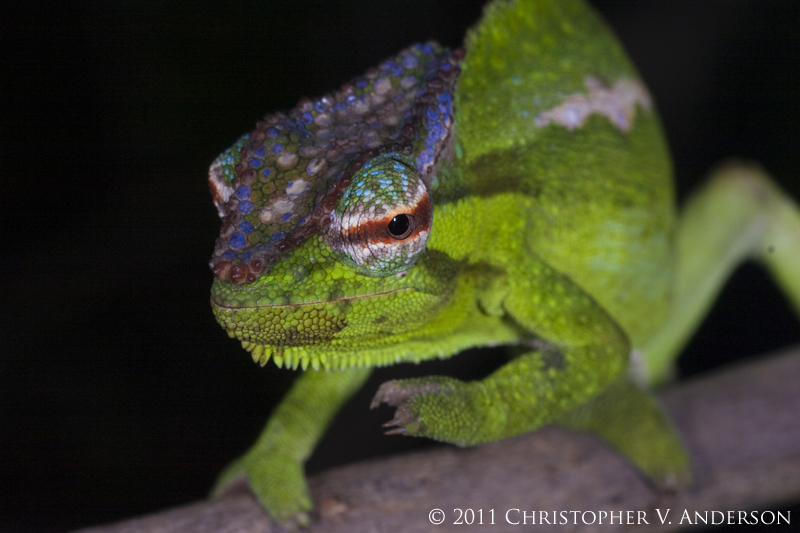 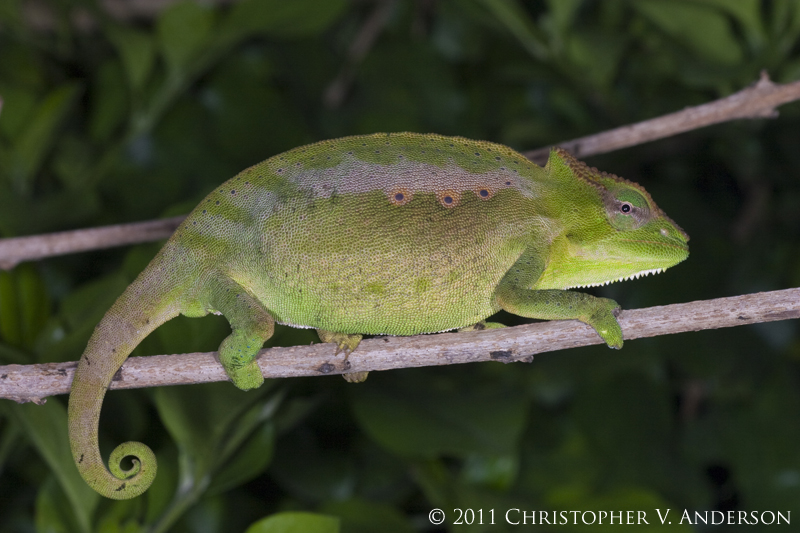 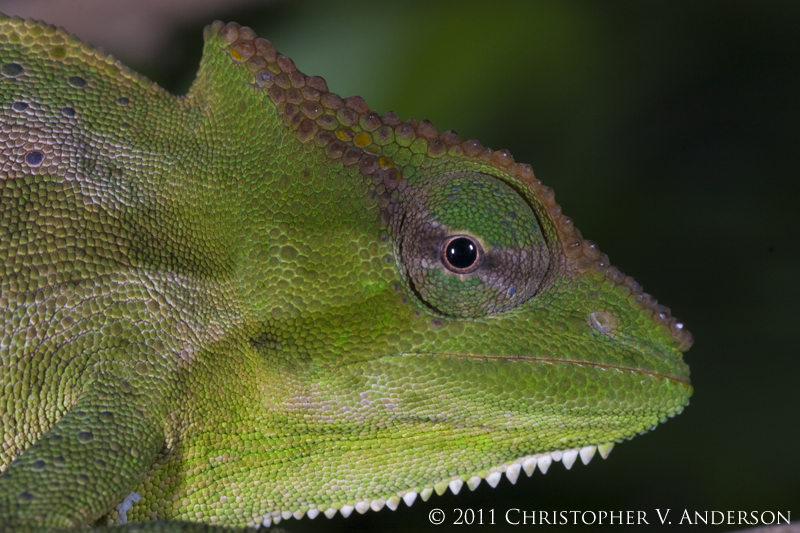 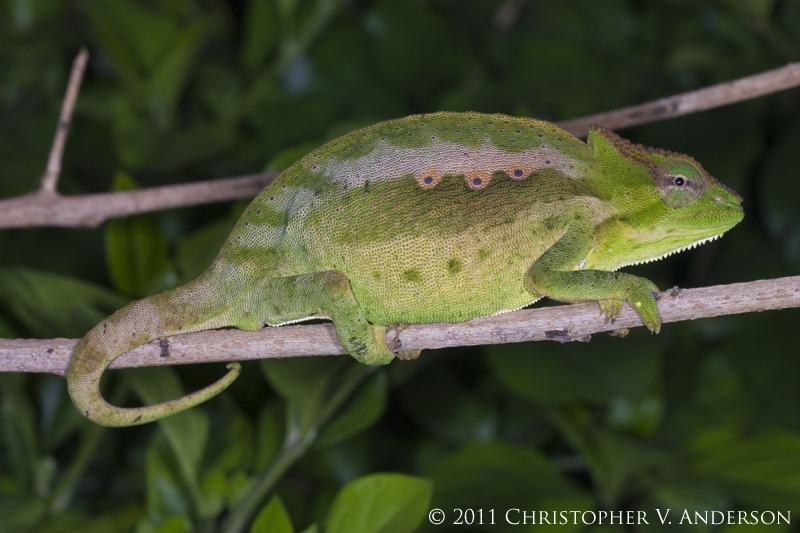 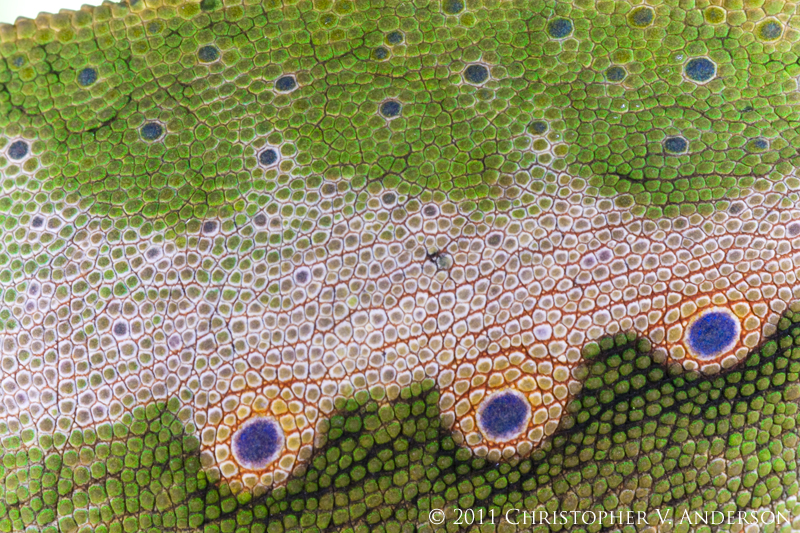 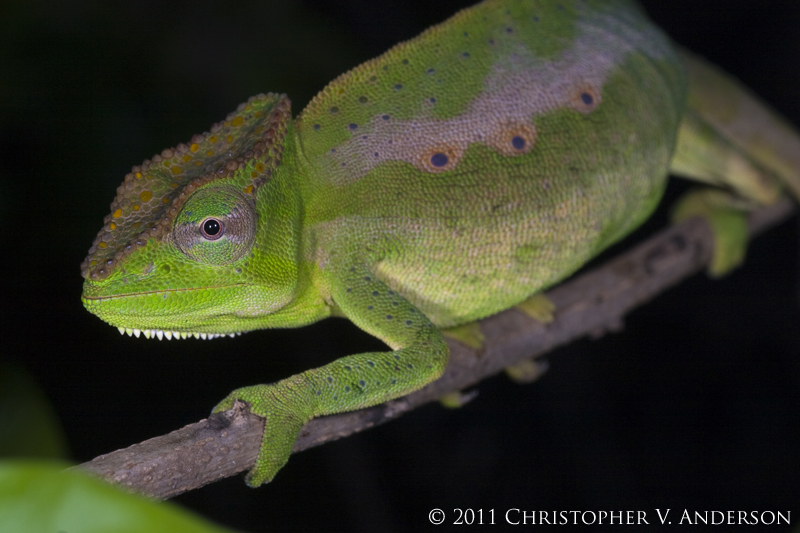 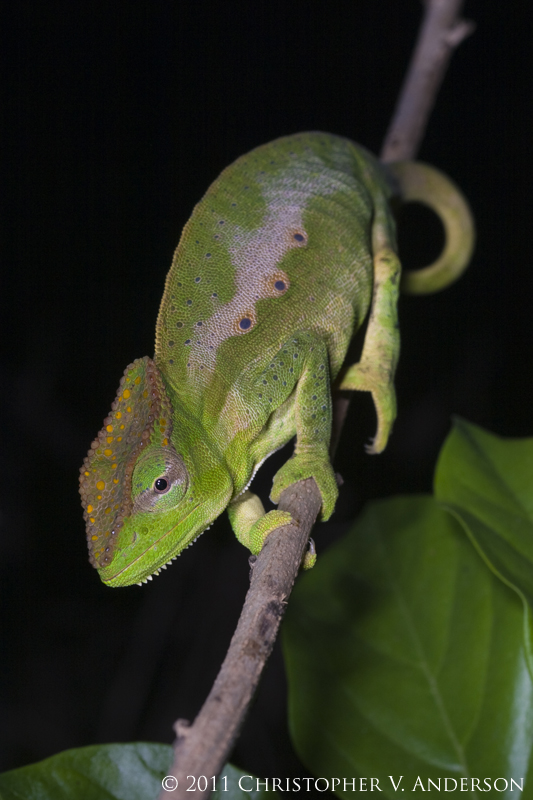 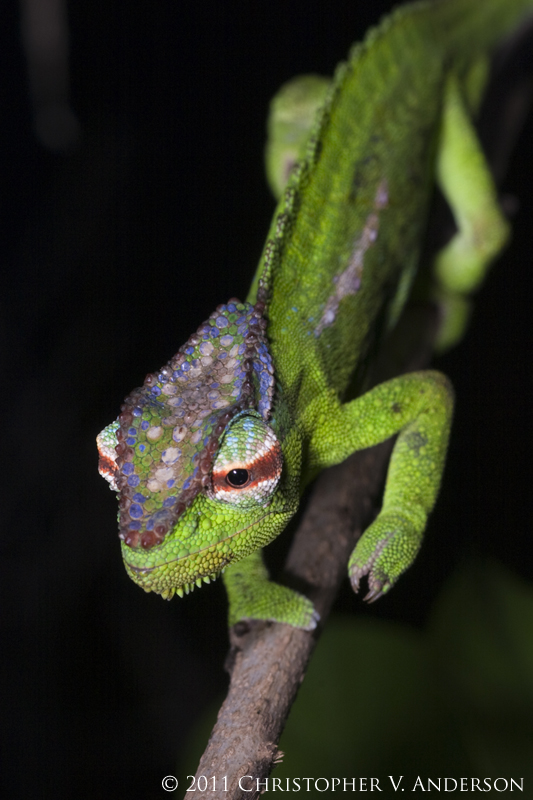 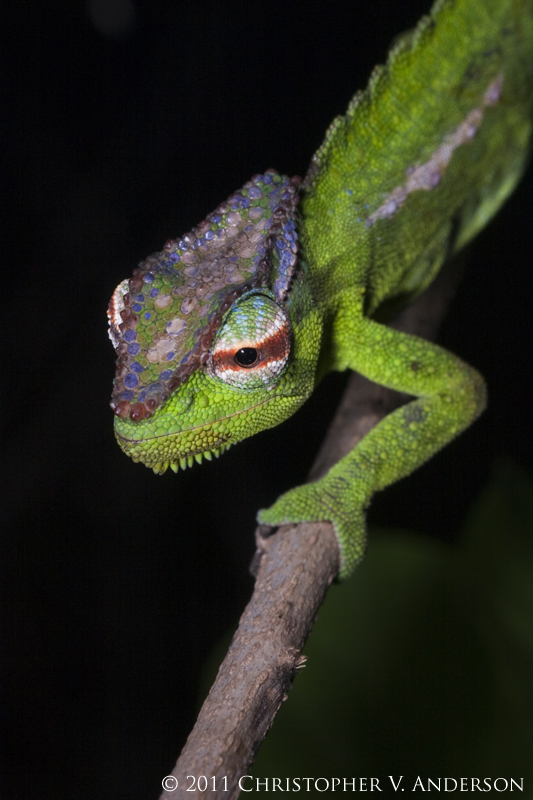 Considering the fragile reputation of this Trioceros perreti in captivity, we were surprised to see this species living in such disturbed habitat. They appeared to be found equally in tall grass along the road and short shrubs in the riparian zone. Temperatures ranged from 16.5-18.2ºC (62-65ºF) in the habitat while we were there.

Unfortunately, we were unable to locate any additional Trioceros q. quadricornis before we left the Southwest Region for the Northwest Region.

Hope you enjoyed the post and stay tuned for the next installment!

WOW. the eyes are amazing on the second one.

Some really nice photos Chris. I love them all. That it the most gorgeous grass hopper! I want him for a pet.

Chris- was that female gravid? She looks huge! Nice pictures. I am really enjoying these threads!

LinkinParkRulez08 said:
Chris- was that female gravid? She looks huge! Nice pictures. I am really enjoying these threads!

Yeah, she was. She looked like a bag of marbles. I'm sure she laid within a day or two of taking those photos.

I really enjoy reading your post and seeing the photos of the chameleons in there natural habitats. Those are some great pictures.
J

Awesome as always Chris!!! So interesting to see the different species! I love the blue dots and the single stripe going through the chams eye! so cool!!!!

those blue dots are beautifull, great pics thanks

Peacock chameleons are so adorable. lol Thanks for sharing.

Thanks for posting again Chris.. those perreti are amazing!!
J

Thoroughly enjoyed the series, Chris.
You must log in or register to reply here.

Shed taking longer than a week

Help! I don't know what else I can do!