does anyone candle there chameleon. if so begining, during or near time to hatch. just wondering i haven't candled my eggs but i was wondering if anyone does

Staff member
I have never bred chameleons, so don't have any experience here. Do you mean using a candle to look into the egg?

yeah not really a candle a small light

I used to keep poultry, and candled the eggs in the incubator every three days during hatching season. I had 3 cabinet style incubators, and they were kept full during the spring and summer. By candling, I could take out bad eggs and make room for fresh ones in the incubators. However, chicks are not reptiles, so please, if anyone reading this decides to give candling a try, read up on it from people who have candled reptile eggs, which I have never done.

From what I have read, candling a reptile egg is virtually the same. Bird eggs require turning on a frequent basis as they incubate, so moving them around while candling was never an issue. If you decide to candle your reptile eggs, you might want to be careful about changing their position at all since they aren't turned while incubating.

With birds, I used a candling box because it reduced the chance of dropping the egg and made the process much more simple. Those little flashlights used for candling eggs work, but it is really hard to hold onto the egg and the flashlight at the same time, and your fingers get in the way of really taking a good look at what is going on inside the egg. Basically, a candling box is a simple wood box with a light fixture mounted inside of it. I drilled several holes of varying sizes in the box for different sized eggs, and used corks in all but the one I needed for that particular egg size. Then, I turned out all the lights but the candling light and placed the eggs one after the other on the one open hole on the box. Never leave the egg on the box for longer than a minute or so, because that light produces a lot of heat!

I am making an assumption that chick eggs and reptile eggs are similar in this regard, so read with discretion! A fertile egg will show red veins. An egg that has died will show a blotch in it somewhere and the veins will be a very dark color. An infertile egg is clear of veins completely, and looks like an egg that was just layed. If you have a batch of eggs all layed on the same day, and they all show veins but one, chances are very good it is infertile. On eggs close to hatching, you can see the heart beat and the embryo moving around inside the egg, usually in response to the light from the candling box.

These are not good pictures at all. They were taken with a digital camera around 4 years ago or so, and camera quality has changed significantly.

This picture is of the bottom of the candling box. Sorry, I don't have a picture of the top of the box anymore.

This is a fertile bantam egg, 6 days into a 21 day incubation period. 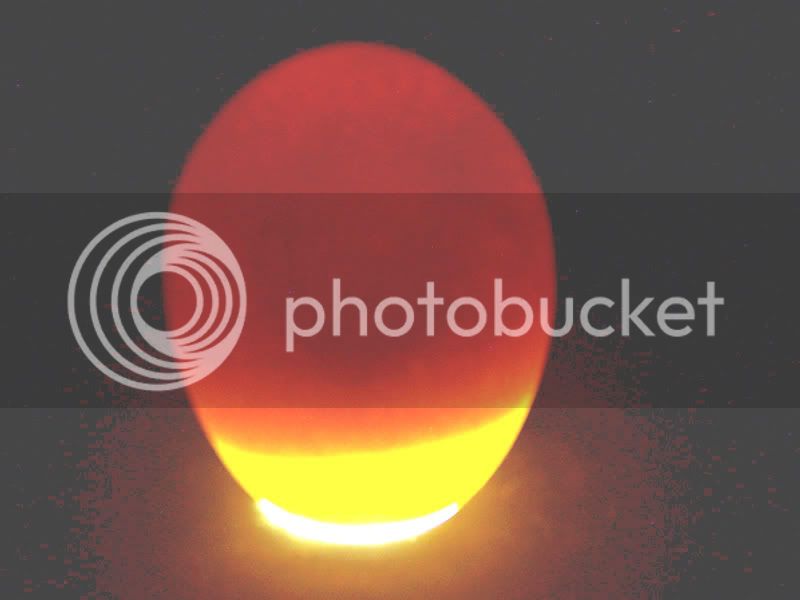 This is an infertile bantam egg.

This is a fertile egg where the embryo died. There is a blood ring in the egg.

Hope this helps someone at least a little.. I feel like I am comparing apples to oranges...

candle8ing regular reptile eggs is like the same as candleing chicken eggs. what i want to know is has anybody ever candled chameleon eggs without any complication in the devoloping embyro.
You must log in or register to reply here.