I live in Southern California near LA. I've seen people recommend Dr. Greek on these forums but they're booked for the next month. I asked to be put on the waiting list in case something opens up

@jannb What vets do you recommend near the LA area? They tried Dr. Greek but they are booked up for the next month so they had to be put on a waiting list. Any other ones you would know of there?

Beman said:
@jannb What vets do you recommend near the LA area? They tried Dr. Greek but they are booked up for the next month so they had to be put on a waiting list. Any other ones you would know of there?
Click to expand...

Dr. Stein had changed hospitals but he is excellent. Let me see if I can find out where he went. Dr. Molnár is very good too, and sees allot of chameleons.

Thank you for the recommendations, I appreciate it!

Update on Roxy
The black markings are now on both sides of her body but are not spreading any more as far as I can see. She started shedding her head and back on Sunday and it looks like her legs will shed soon too. She is still active and eating (however, she went off her food for two days before she shed but I read they will sometimes go off food before they shed) but I am concerned about a couple things not connected to the black markings (although I am still very concerned about those).
Concern #1 for the past few nights I have noticed she will climb into her sleeping spot about an hour before bed, which is normal, but she will also close her eyes for about half a minute and open them again. The past two nights she did this once or twice, but then tonight she did it repeatedly several times until her lights went off. I have never caught her sleeping/closing her eyes during the day but I am not in there much during the day. I still think I would've caught it at least once if she was closing her eyes during the day. Is it normal for them to be closing their eyes when it's close to bed even if the lights are still on?
Concern #2 is she has been passing urates every day for the past ten days with no poop. Perhaps I have been keeping her too hydrated and that is causing her to pass urates every day? I really appreciate any advice you guys could give me!
@AmandaS @MissSkittles @jannb @kinyonga @Beman
K

Still no eggs?
Do you have some photos from today?

Nope no eggs
Here are some photos 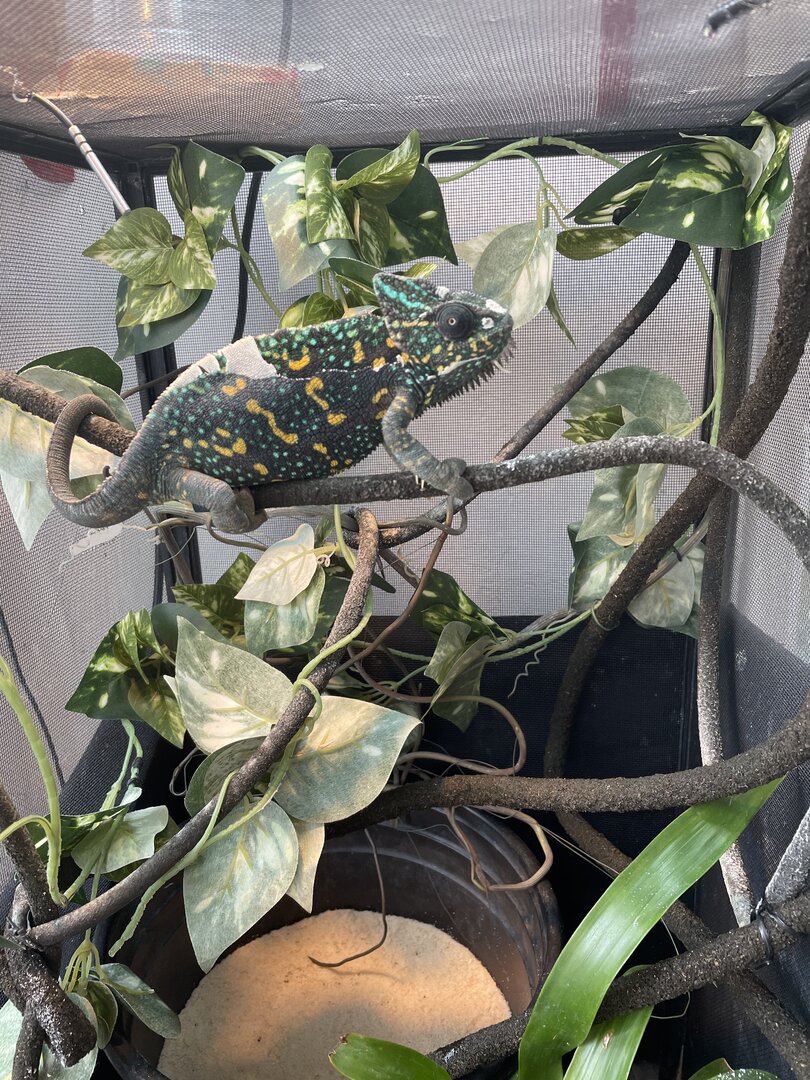 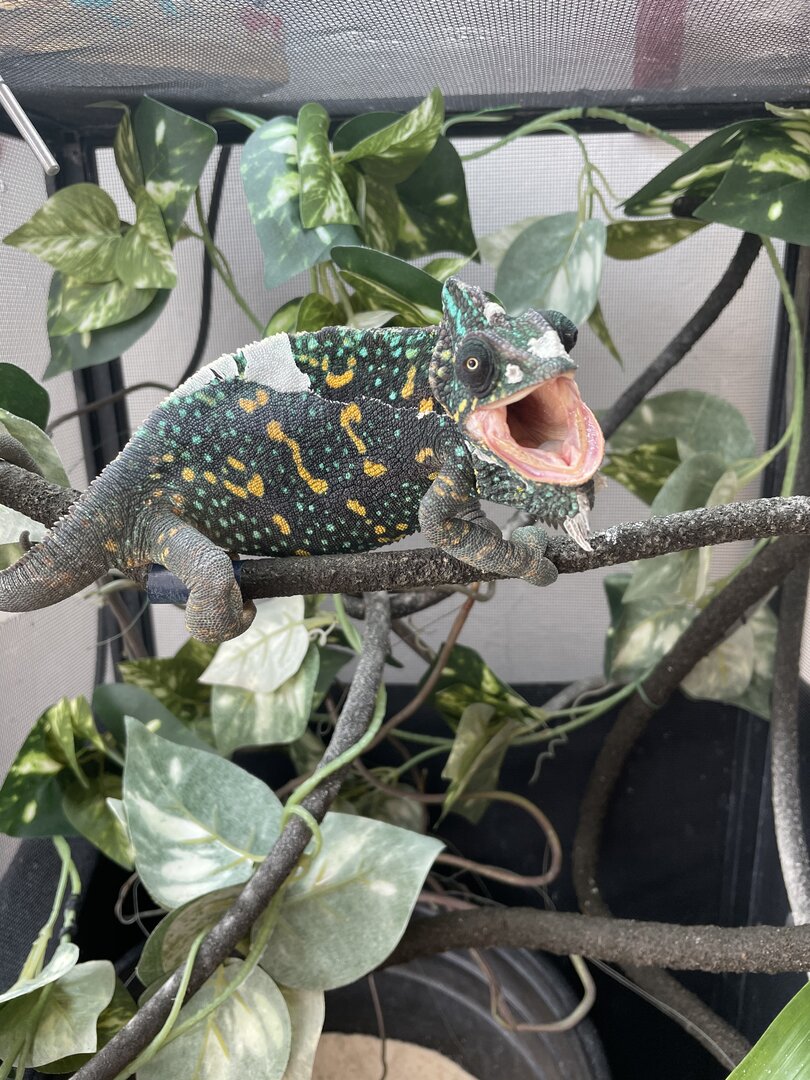 Interesting. I am not ruling out that it’s related to impaction, but she started showing the black markings on April 8 (possibly before- I have a vague memory of seeing what I thought was dirt on her foot before April 8 but might’ve been those black markings) and then had a bowel movement on April 11. The black markings did not go away after her BM and are still there. Here’s a pic of them from last night 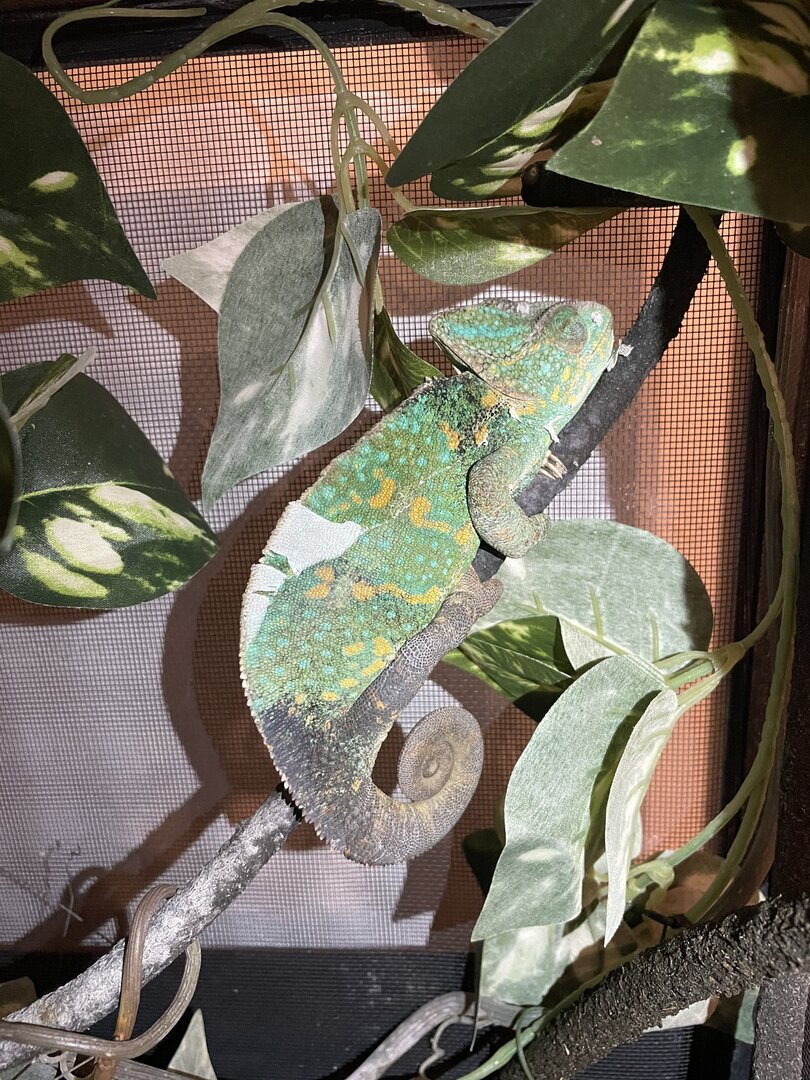 Today is the 11th day of no BM. About a month ago she didn’t poop for two weeks. On the 14th day of no poop I gave her a couple drops of olive oil and the next day there was a poop. It was normal sized and her pooping schedule went back to normal after that. I always thought perhaps she wasn’t really impacted and just didn’t need to poo for two weeks since the poop was so normal sized. All the cases of impaction I’ve read about usually ended in a ginormous poop

At what point do you think I should try olive oil again?
K

Impaction isn't the only thing that can cause this...eggbinding can too...I sited that site to show you how similar the look is between your chameleons discolouration and that of the one in the site and that pinching of the nerve is likely the cause.

Yes I have seen discoloration like that in other cases of egg binding too. However, she isn’t showing any signs of egg binding like lethargy, loss of appetite, or straining so I’m not sure what to make of it
You must log in or register to reply here.

Advice for an egg bound chameleon

How often should a veiled lay eggs?

Help with restlessness and black spots
2