We tried the shower thing a couple of times and Garret deffinitly does not like that. So last night we tried a bath.. this was far more acceptable. He was less upset and didn't seem to hate me for it after. (espeshally after the treat)

My question now is how long should he have a bath for?

And does anyone have any suggestions about how to make the bottom of the sink less slippy.. a towel kinda worked but it just kept floating.

When you put him in the shower was he directly under it? If so, that is probably why he didn't like it. You should put him on a plant, with just a small part of it under the water and the rest out of the water. Put the cham on the side that is not under the water, he will still get small droplets of water being sprayed on him, just not as hard. It took a few goes but my chameleon loves showers now. I've never heard of any chameleon owners giving them baths, does he not struggle to get out?
4

No he was not directly under the shower, and he was on a plant. but pretty much from the moment he was in there he was dark brown-black.. and that = not happy. We have tried showers probably 1/2 dozen times at least and everyone one he has hated.

He struggles a little to get out of the bath but stays a decent green color. Not his bright full colors but not "you evil person why are you doing this to me" brown. He doesn't even seem to mind me pouring water on his back.. but dislikes it on his head (but I knew he didn't like water on his head)

I guess I should mention that the water was luke- a little warmer warm and only a 1 1/2 deep and I was CONSTANTLY with him.

I can't really understand how you could give one a bath... It just doesn't seem chameleon-like to me. Instead of letting water fall on the plant from the showerhead, I point the shower head at a wall which creates a speckling spray. Very light. If this does not work for you, there are shower heads on the market that actually just 'billow' out a thick foggy mist and not a spray at all. fills the room like a sauna.

I have had great success showering at night in the dark. They are more calmed and still sip the water.

Im sorry if im missing the point of the shower, is it to clean the chameleon or to give it water? Also Will Hayward, that is a beautiful cham. I love the red


Its both. Its to give them a prolonged 'Heavy' misting. Hydrates, helps with shedding. My chameleons can stay in the shower for around an hour. My misting system could run 24/7 but its a very fine and light foggy mist.

You dont NEED to shower chameleons if you have effective misting systems but I do every month or so and whenever they shed.
4

I used the same principle as bathing a bearded dragon. Have him hang onto you with his from legs or have the water shallow enough that his head is out of the water.

NO the water was not directly spraying onto him while he is into the shower!

I have not tried a shower in the dark perhaps he will like this better. But since he was having so many problems with the shower and was angry at me for days after I thought I would try the bath it seemed to be successful.

Next time (perhaps tonight if there is time) he gets a bath I will have my parents take his picture so you can see.

I use mist systems, but once a week or so, I put my chams in the shower for a prolonged rain. They do seem to like the mist or secondary splash of the water more than being in direct rainfall. I put sandblasted grapevines in the bottom of the tub, a screen over the drain in case they defecate, and keep the bathroom dark.

Be careful to not get it too hot and steamy in the room, as this actually dehydrates.

Regarding bathing: I have done this for several species, from brevs to melleri, but only as a medical therapy. A lukewarm soak can move the bowels or eggs. When used with a few drops of Nolvasan concentrate or antibacterial hand/dishwashing soap, it can be a helpful treatment of those horrendous foot wounds (ulcerative pododermatitis) found on WC chams.

I found a couple long, shallow, and narrow Tupperware containers and they are my "official" melleri soaking tubs. The water level is roughly 1-2" deep. I set the container in the bottom of my tub; if the cham should climb out, it can't get into trouble or contamniate its feet with a dirty surface. I also keep the room dark, and fix a firm headrest under the cham's chin to prevent it from submerging. I used to use empty TP rolls for this, but I switched to a solid resin chin rest that does not want to float. Smaller species need a submerged towel to grip and your finger under their front feet or chin for safety. I soak once a day, sometimes twice, as long as the foot wound is open. If soaking a new or WC animal, I clean the entire tub and soak container thoroughly after each use.

Here is one WC melleri just put in to soak for a foot sole wound. She hates the camera. 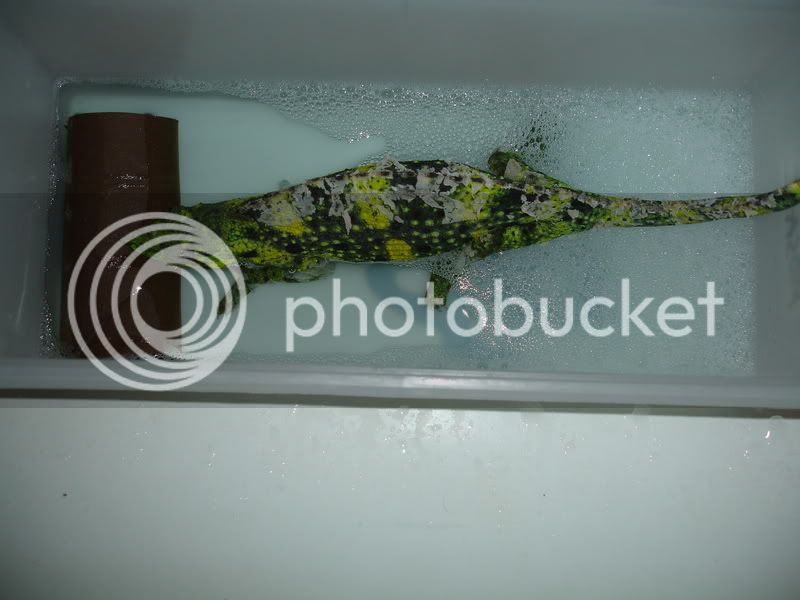 Here she is, a couple sessions later, drying before I put ointment on the wound and returned her to her enclosure. 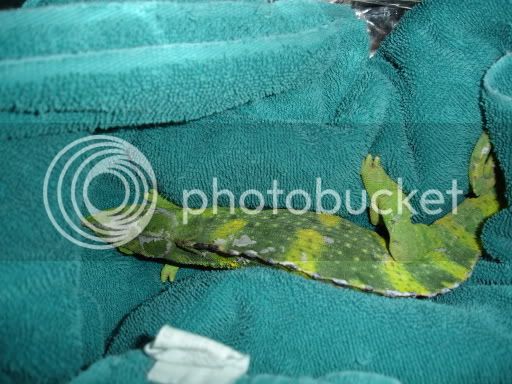 She healed beautifully and actually became a little more tolerant of me after she figured out the daily rhythm. She may have associated being handled with a pleasant sensation of the soaking? Now that she's out of therapy, she's gone back to hating me properly.

This kind of bathing therapy does not involve pouring water over the animal. I don't restrain the chams in any way. The warmth of the soak encourages the cham to settle in and nap, of its own volition.

If you are trying to hydrate and not heal a wound, go with the shower method.

In the second pic, I forgot to mention the white on her dorsal crest/caudal crest is the Silvadene ointment. She had some minor scrapes when she came in. I dab goo on those areas before I do the soles, because they don't get submerged.
C

i would use a diluted form of betadine instead for cleaning any wounds.

ChameleonsTree said:
i would use a diluted form of betadine instead for cleaning any wounds.
Click to expand...

I should point out that cleaning the wounds is not the only benefit of soaking. The warmth and/or the solution appears to relieve pain, as well as keep bacteria at bay; a lame cham will become sound again after soaking. Less pain is less stress, and minimizing stress is the goal.

Betadine can stain the skin, which may, in some small degree, conflict with the animal's photosensitivity and UV absorption... I'd think? For my animals, I would rather not use that as a soak solution. None of my herp vets have recommended it.

I have used Betadine gel as a topical (not a soak solution), and that seems to stick fairly well to one area on a cham. It stains for a couple days, even under the misters. It is an effective ointment, just depends on what the vet calls for...

Anyways, I prefer to soak with a solution of Nolvasan because a very good herp vet recommended this soak therapy for ulcerative pododermatitis. I have had no problems with it. I have had lots of success with it, even in pretty dire cases of UP. If soaking is the difference between recovery or amputation, it's worth the trouble to save a toe.

In any case, if one gets a WC at all, whether or not it has UP, one should consult a vet about treatment, topicals, and home nursing.
You must log in or register to reply here.

New Owner of Chameleon - Wanting to ask for opinion, of what do you think does my Veiled Chameleon Looks healthy?
2