Hi, my name's Trav. I've liked chameleons ever since I was a child, and because of this, my girlfriend decided we needed one for my birthday. I have to say, it's both exciting...fascinating, really; and a challenge. I've never been one for the idea of an animal on the same level as a child, but being honest, it suddenly feels something like that!

I've been reading quite a bit, as a I feel a little "behind the eight ball" not having planned for such a thing, but she did quite a bit of research on her own, and we have an open-air screened enclosure, water dripper, thermometer and humidity gauges, dual 75w day basking and 75w red night heat lights, a 5.0 reptimed UVB, and after the first day I picked up a palm, an arboricola and a money tree. He really seems to love the money tree! It's a shame that it sits little higher than the other plants, as once he went up there, he hasn't seemed to have found a reason to come down. I guess he likes moving around in and out of the lights.

I watched him drink the very first day, and saw him eat for sure today. I was just adding three crickets a day, and I think he was eating them, but today I decided to just at one at a time right in front of him, because I was concerned. I seem to think this is a better way to do it.

I also need to get a mister, as the humidity is too low, around 40%. Also, the dripper is dripping on the arboricola, which should be great, but I haven't seen him down there. I put it over the leaves on his tree this morning, and he came over and had a drink, so I don't know if he would go searching for water down to the other plant, or not. A mister would be better for water all over, as well.

The house could use a humidifier anyway, and this might actually prompt me to get one. We could all benefit!

I would like to make sure he is healthy and parasite free. One of my main concerns are these raised imperfections he has on his skin. They are dark blackish in color, and sort of appear like scars, to me. There are a few on his tail, on a knee, one on either side of his head and smaller spots on his face and around his body. I have a pic I took the first night, in which some of them can be seen. Not the best, but it might give an idea: 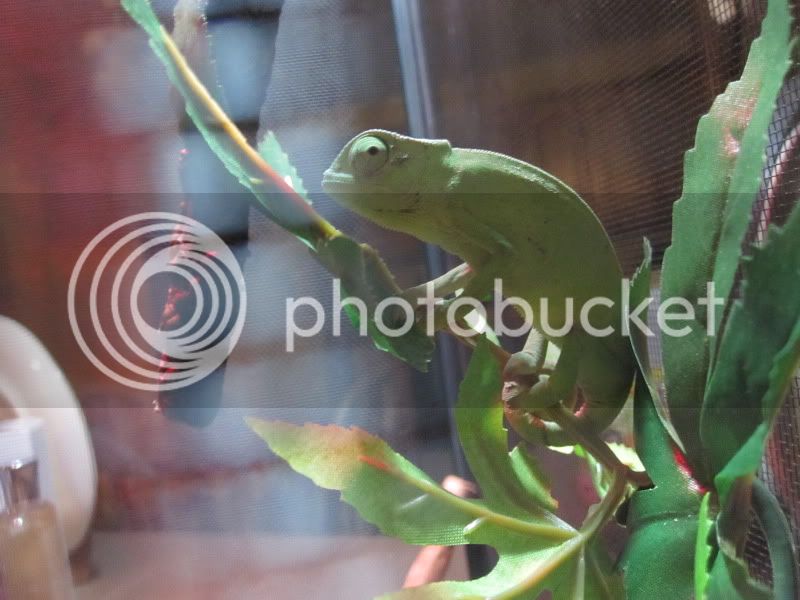 one of the more prominent spots on his tail can be seen highlighted in the background between his two rear feet. Also, another directly below his back foot. The one on his head behind his eye is easy to see, too, as well as the few various smaller spots on his left side.

Anyway, so that's this story, so far! Thanks for reading
D

Looks like that beautiful little guy is gonna be in good hands. And the black scars your talking about, my baby flapneck has those too, i just bought him at the reptile show. One possibility is that it is wild caught and those scars are from frolicking in the wild and what not. Im taking mine to get tested for parasites, if you have a vet near you, he should be able to do a fecal exam

Welcome!
Most times, the red night/heat lamps aren't necessary (unless the temperatures in the room your cham is in are dropping into the low 50s or below); my chams have all been fine with a nighttime drop to 60 in the winter.
Misting is good, and you don't need any really fancy equipment - I just use a hand operated spray bottle. The trick is to mist much longer than you think you need to - I've had several chams that seem to require a 5 minute "priming" period before they even figure out what's going on; then they'll drink willingly enough. With mine, they'll start opening and closing their mouths during the misting - I keep spritzing them for a few minutes more, and then they know it's drinking time, and will lap water off the leaves. Mop up any excess water at the bottom of the cage; ideally, a lot of it can fall into/onto the plants. One thing I wish I'd known when I started is about the urates - chameleon waste has a brown portion and a lighter colored portion (the urate). White urate indicates a well-hydrated cham - orange urate is a rather dehydrated one, and colors in between signify progressive stages of dehydration.
Chameleons will often bruise black. I can't really speak to his black spots, but they look as though they could be bruises from shipping, or bite marks. When you say "raised imperfections", it raises just the possibility of subcutaneous parasites. Keep an eye on them and make sure they stay in the same place. If you'll post where you live, somebody may be able to suggest a good reptile vet for your area; it's also not a bad idea to have a vet examine his feces for parasites; that's a very straightforward procedure that can set your mind at ease or, conversely, let you take action before potential problems get out of hand.
Again, welcome and good luck!
T

Thanks for the vote of confidence! We're trying

I think it may be wild caught, as that's what I've read in common with Senegals. That was actually my first thought, if they are indeed, scars.

I need to find out about a vet. I know there are a few in the area, but I don't know about reptile-specifics. Apparently, he came from a private pet store. I was thinking of going there myself, just because I'm curious to see if they have any insight, and what the place was like.
K

Welcome to the world of chameleons!

The little black marks are quite commonly found on WC Senegals (and other WC species too). Just keep an eye on them and if they look like they are getting worse then you will need to investigate them.

Senegals need to be "well-watered" and for the most part can be kept just the way veiled chameleons are kept. Looks like you have a fairly young one that's in pretty good condition!

Here's some information that might help.......
Exposure to proper UVB, appropriate temperatures, supplements, a supply of well-fed/gutloaded insects, water and an appropriate cage set-up are all important for the well-being of your chameleon.

Exposure to UVB from either direct sunlight or a proper UVB light allows the chameleon to produce D3 so that it can use the calcium in its system to make/keep the bones strong and be used in other systems in the chameleon as well. The UVB should not pass through glass or plastic no matter whether its from the sun or the UVB light. The most often recommended UVB light is the long linear fluorescent Repti-sun 5.0 tube light. Some of the compacts, spirals and tube lights have caused health issues, but so far there have been no bad reports against this one.

Since many of the feeder insects have a poor ratio of calcium to phosphorus in them, its important to dust the insects just before you feed them to the chameleon at most feedings with a phos.-free calcium powder to help make up for it. (I use Rep-cal phosphorus-free calcium).

If you also dust twice a month with a phos.-free calcium/D3 powder it will ensure that your chameleon gets some D3 without overdoing it. It leaves the chameleon to produce the rest of what it needs through its exposure to the UVB light. D3 from supplements can build up in the system but D3 produced from exposure to UVB shouldn't as long as the chameleon can move in and out of it. (I use Rep-cal phos.-free calcium/D3).

Dusting twice a month as well with a vitamin powder that contains a beta carotene (prOformed) source of vitamin A will ensure that the chameleon gets some vitamins without the danger of overdosing the vitamin A. PrEformed sources of vitamin A can build up in the system and may prevent the D3 from doing its job and push the chameleon towards MBD. However, there is controversy as to whether all/any chameleons can convert the beta carotene and so some people give some prEformed vitamin A once in a while. (I use herptivite.)

My Senegal is WC and he has the black bruises as well as what I would call black scabs from scratches. Just keep him well hydrated and they will get much better in time and even better with a shed!

Hi! My senegal, Olive had similar pieces of gray skin on her, but they came off with the first shed she had with me! Now she is smooth and perfect! She also had a big black hole/burn thing on her head that fell off with her shed and looks to be healing quite nicely!!! Good luck!
You must log in or register to reply here.