As a child I´ve always been fascinated with reptiles and amphibians, searching in local ponds for salamanders and bringing them home to keep them.

Then my first reptile was an Iguana and I loved him, can write a complete book about him, even had some more reptiles including snakes. However, a Chameleon always made it to my favorite reptile species, however I only heard that keeping them was extremely difficult. This kept me away from buying one, and because in that period I was more from home then home.

Now thanks to COVID-19 and being home a lot for work (mandatory home working) that old desire came on lurking again. And I started to search for chameleons and their husbandry, unfortunately only on outdated Dutch website (figured that out later) and on the misleading commercial websites. Resulting in unfortunately, luckily pulled the trigger for buying a chameleon, starting of completely WRONG!

Received green lights from my beloved wife, to place an enclosure in our living room and that I could spent $500.00 on the enclosure etc. In with I ended up with an almost full Exo-Terra enclosure, again all WRONG! A too small one, wrong lightning (UVB bulb), bottom substrate, waterfall, fake plants, and the moss vines and so on. Just no hiding and not enough climbing opportunity. We all know how that looks like…….

Quickly I realized that I needed to fill it with more vines (yesss still the fake vines) and with real plants. The more plants I putted in, the better feeling it gave me, but more important gave her (come to that later). Slowly I came across the Chameleon Academy and found out that certain things where wrong (uhhh everything). And started exchanging things, like removing the waterfall, putting in a misting system, changing out the regular bulb for linear UVB lightning. When the enclosure slowly went from poor equipped to fully stuffed with plants and branches, I started noticing how big she was getting and how small the enclosure was. With some disappointment of my wife, for spending again more money and putting in a larger enclosure in the living room, I went up for the 2´x2´x4´enclosure. Really wanted the Dragon Strand enclosure, however they couldn´t ship to the Netherlands, therefore ended up with the ReptiBreeze.

Then I came across Chameleon Forums and everything went into overdrive, ending up with a bioactive enclosure right now. Many thanks again, for this community and all the time they´re willing to spent towards us newbies, with excellent advice and knowledge sharing. So here´s my two cents.

The point of all this, is the change of behavior that I have noticed in this short time of period. As I said I´m a newbie as chameleon keeper, however I´m damn good observer and always get a connection with an animal.

The things I´ve noticed during the changes are as followed and I think these are not directly answers, however input / feedback at some outstanding questions.

Stepping from fake plants (where I already noticed she took bites from them) to life plants within the small enclosure with daytime misting, give the result of a vigorous plant eater. She literally chewed up all the vegetation. Sometimes looking at me and just demonstrative tear off a leaf. During this period, her feces was always good, not perfect, in terms of the urinate.

After reading about the hydration method from the Chameleon Academy, about nighttime misting and fogging, and drying out the enclosure during the day, I noticed the first change. Feces went from good to perfect and suddenly she left the leaves for what it was, for 80%. No bite marks, no missing leaves.

Question; is there a correlation between proper hydration and eating vegetation? I read a lot of things about why Veiled´s eat vegetation. Must likely it´s hydration. For mine point of view and observations this looks correct. At least partly (more to come). Still, this is just one observation from one animal, however it´s feedback.

Second observation, as stated above, after hydration was settled, the plant eating almost reduced to none. Still was she was eating from it; however, it was more in a destructive way. After I noticed the enclosure was too small, I put her in a new larger enclosure and more space means more live plants and branches. Even changed her view (forest print sides) and raised the enclosure higher in the room. This change is done for 6 weeks now, inside the enclosure it´s just one big foliage with a top basking area, and not one leaf is missing nor has a bite mark. Her colors are constantly the same and she explores the whole enclosure when she´s in the mood. Giving no signs she wants out, no screen walking, no hiding, just actively hunting and always sleeping in the open like she feels secure inside her enclosure. It even looks like she has her daily routine, just like her ‘autistic’ keeper.

Question; is there a correlation between state of mind and biting in plants? Do not know the answer, however observed that she hasn´t been interested in biting plants, since she went towards her big enclosure, full hiding opportunity´s and challenging branches network. In other words since her change in state of mind. Happy chameleon vs destructive chameleon.

Another observation was in the beginning I saw her eating very often soil from plants. No clue why, till I did a husbandry check and members from CF draw attention to the given supplements, daily with D3 (giving wrong the ones by pet store). Corrected it directly with the correct one, and ever since, she hasn´t taking a shot from the soil.

Question; is there a correlation between improper supplementation and eating soil? I read a lot of about this subject, why chameleon eat soil. Must likely it´s improper / imbalance of vitamins and minerals. For mine point of view and observations this looks correct. Still, this is just one observation from one animal.

These where my 3 observations that made sense to me in just a short time of period. Maybe more will follow, this is it for now.

As stated, I´m for 200% a newbie and got still some many things to learn. I don´t want to be the smart ass overhere and just want to share my observations with you, so please don´t shoot me. Knowing from my kind of business, feedback from the field is crucial and sharing it makes statistics more solid. And sometimes writing about it can release a snowball effect of reactions and more important, useful data.

Somewhere in between, already did some mods (before I came across Chameleon Academy and Chameleon Forums)....... 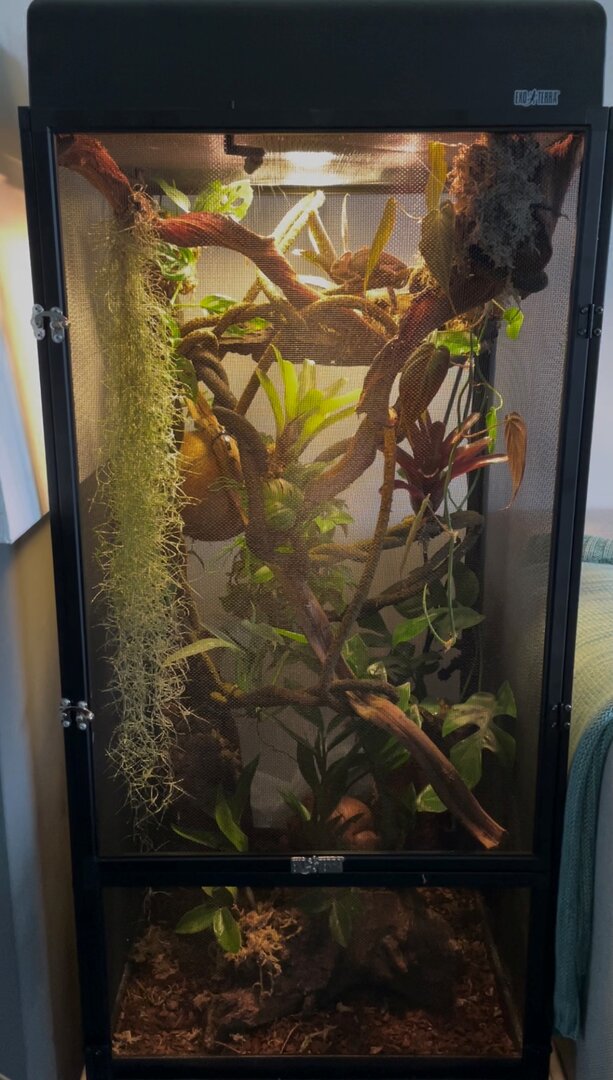 Enclosure as we speak 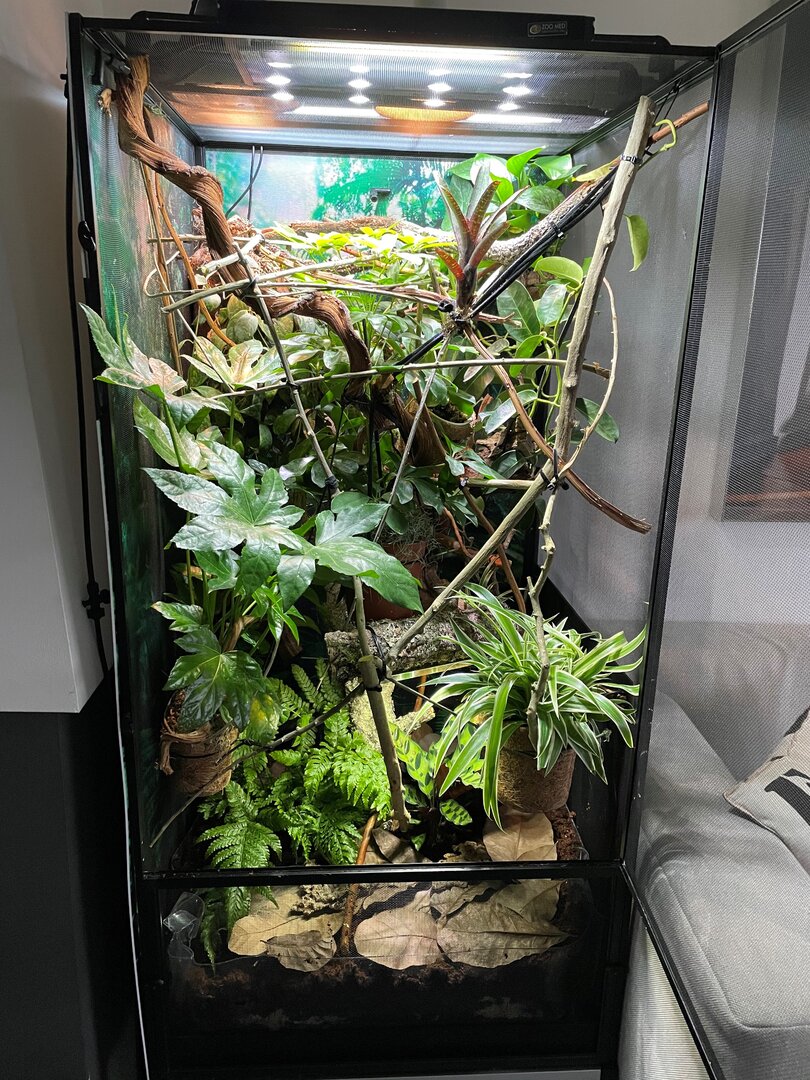 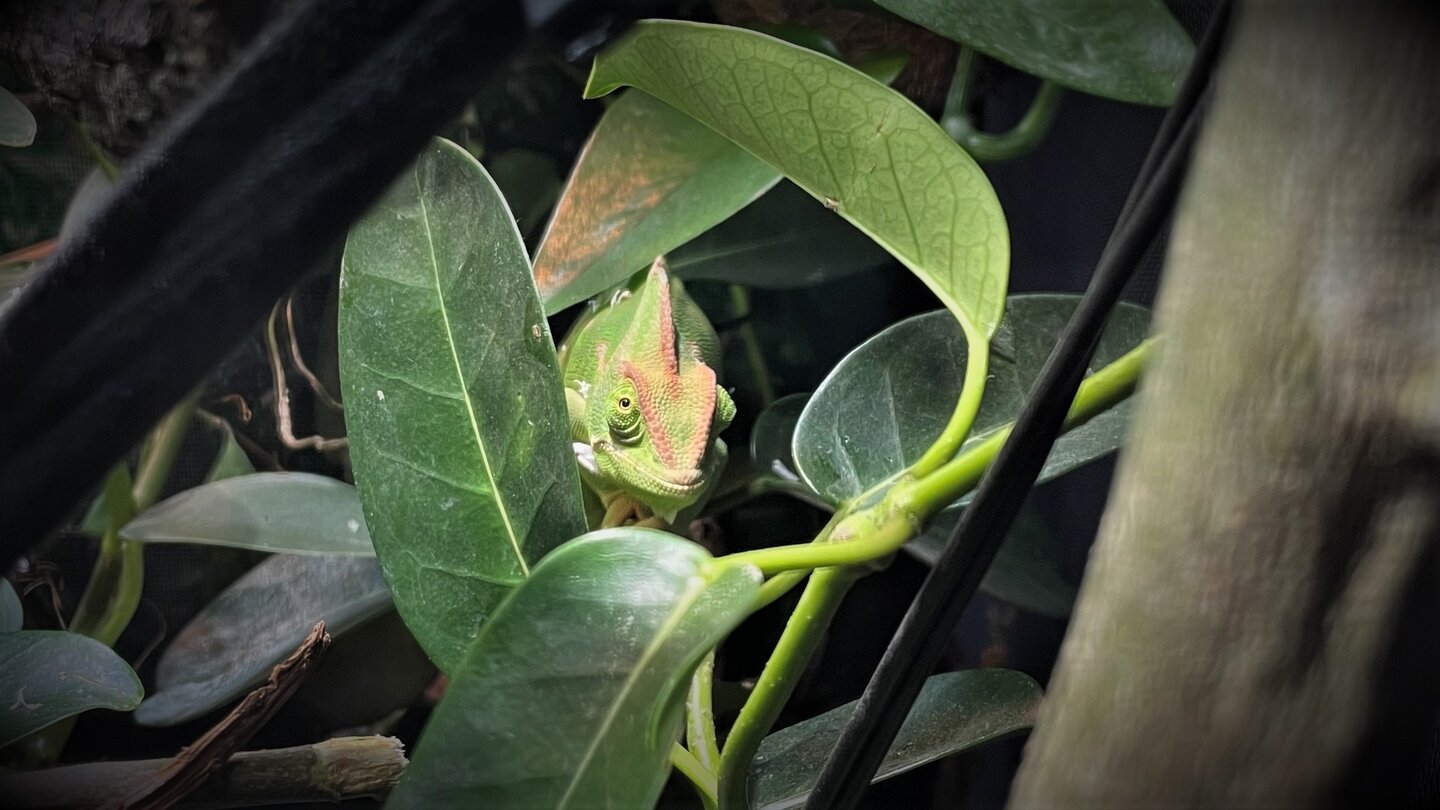 Thanks for sharing this. Great pics and a nice looking home

eric-serenity-silkworms said:
Thanks for sharing this. Great pics and a nice looking home
Click to expand...

How good is this for the chameleon though, are they not arboreal creatures who like more branches?
view our sponsors